There were big rises in US shares overnight, with the NASDAQ rising 1.7% in this session, helped by a moderate fall in Treasury yields.

“Now it ain’t so neat to admit defeat; They can see no reasons; ‘Cause there are no reasons; What reasons do you need, oh oh oh oh?; I don’t like Mondays; (Tell me why)”, Boomtown Rats 1979

I don’t like Mondays was a hit for Irish band Boomtown Rats and no doubt a sentiment shared by the average Turkish citizen after the bruising depreciation in the Lira on Monday. At its peak the Lira was down 14.9% against the dollar following the dismissal of the central bank governor, paring the declines to a 7.2% fall with Turkey’s Finance Minister reiterating their commitment to price stability and that fiscal policies will support the monetary authority in efforts to rein in inflation. Importantly there has been little contagion to other emerging markets as some feared, with only the Russian Ruble (-1.1%) and Brazilian Real (-0.4%) falling in sympathy. The AUD did dip initially below 0.77, but has since recovered to be up 0.1% from last week’s close and is currently trading around 0.7750.

Instead, risk sentiment has been buoyed by a small retreat in bond yields. US 10yr yields are down 4.2bps to 1.68% after having got as high as 1.75% on Friday. The moves should be more considered to be consolidation around current levels, though they did tick a little lower after lower than expected existing home sales (-6.6% m/m v. -3.0% expected). Equities lifted with the S&P500 +0.7% with tech stocks outperforming (NASDAQ +1.2%). In the background there were also reports President Biden is now seeking a $3 trillion infrastructure package (up from the $2 trillion many were pencilling in), and the Fed’s Barkin re-iterated current guidance around QE tapering, stating “ I don’t think right now we are at substantial forward progress…I want to get a good part of the way there before having the conversation about whether we’ve made substantial forward progress”. Barkin also cited the employment-to-population ratio as an indicator for maximum employment which at 57.6% is still far below pre-pandemic levels of 61.1%.

On the mooted US infrastructure package, the New York Times cites sources saying new spending in the plans would likely amount to $3 trillion (see New York Times for details ). Some on Wall Street had been expecting a $2 trillion proposal, so at the preliminary stage it is $1 trillion more than expected. It is though still very unclear how the Administration will garner Republican support given funding will likely have to come from higher corporate income taxes as well as measures to force corporations to pay more tax in the US. There is talk of splitting various components of the package to try and get those parts supported. Overall the infrastructure remains in flux with President Biden set to talk on the package on Thursday.

Vaccine news remains encouraging with AstraZeneca’s phase 3 trials in the US showing the vaccine to be safe and 79% effective in preventing symptomatic disease. The vaccine was also found to be 100% effective in preventing serious illness and hospitalisation across ages, and notably all major virus mutations were present in the study. The US findings are similar to what the UK’s rollout is finding, that the vaccine is around 70-80% effective, with efficacy at 80% for those 70 years and older after the second shot. It is hoped the US approval will reinforce the safety around the vaccine after it had been called into question in parts of the Europe.

Latest vaccination data in the US suggests a greater re-opening of the economy may be nearing. The US CDC reports 69.2% of the over 65 years population now has had at least one dose, while 42.5% are fully vaccinated. As for the whole adult population, 32% have had at least one dose and 17.4% a second dose. There has been a rise in infections in some US states, though continued vaccine rollouts will allow markets to continue to price the other side of the pandemic. In contrast, across the pond German leaders have extended Germany’s lockdown until 18 April given the recent rise in cases. On the back of the lockdowns, the Bundesbank is predicting a sharp contraction in Q1 GDP.

Data was largely sparse with only US Existing Home Sales of note. The data disappointed expectations at -6.6% m/m in February against -3.0% expected with severe winter storms the main culprit. Indeed for the data this week which mainly references February, there could be some volatile reads. Putting aside the winter storms, mortgage activity does appear to be slowing with the recent increase in mortgage rates from the 30yr fixed a likely culprit.

FX markets were largely quiet outside of the Turkish Lira moves mentioned above. The USD (DXY) is down -0.1% with some strength in EUR (+0.3%). Leading G10 gains were NOK, CHF, and SEK, all up around 0.4-0.6% against the dollar. Other pairs were little moved with both the AUD and NZD shaking off initial TRY spillovers yesterday to be both up 0.1%.

Finally as we go to print, the NZ Government has announced a series of measures designed to reduce demand for housing, predominantly by investors, while increasing supply. The biggest policy change is that interest will no longer be deductible on residential property purchases or maintenance. This will be implemented immediately. It will also apply to existing purchases but the reduction in interest deductibility will be phased in over a four year period. No decision has yet been made for new builds. Consultation will be held on this and a decision will be announced October 1 but made retrospective to April 1.

A quiet day for Australia with only Weekly Consumer Confidence scheduled. Most focus offshore will be on Fed Chair Powell in the first of his Congressional testimonies with Treasury Secretary Yellen. Details below: 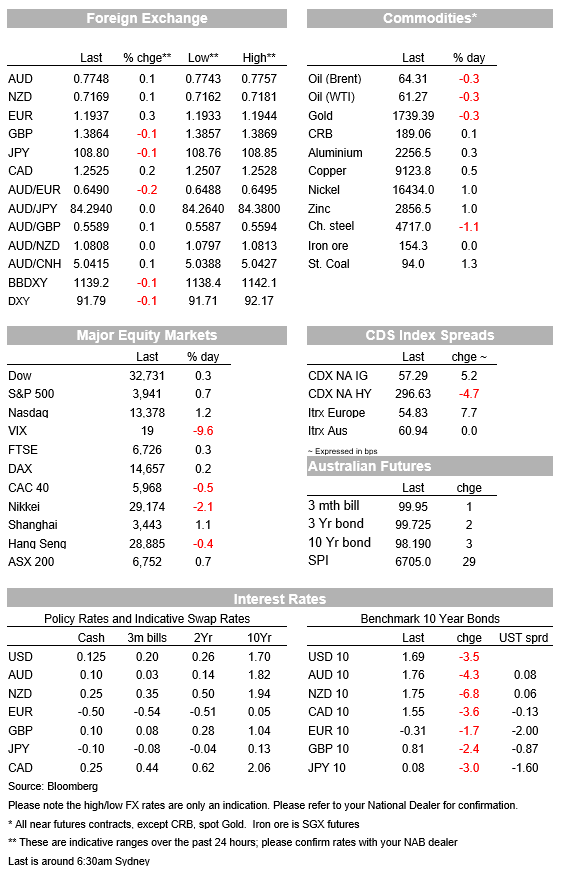