Markets Today: US dollar falls as Fed’s policy sinks in

The US dollar bore the brunt of Friday’s reflective thinking on Jerome Powell’s Jackson Hole speech.

Overview: After the afterparty

If last Thursday’s markets were mostly about the US bond market reactions to Fed chair Jay Powell’s Jackson Hole speech laying out the new Fed framework encompassing a commitment to run the economy hot even as and when the labour market is seen to be back at full employment, Friday’s markets were more about the US dollar and equity markets playing catch-up. Thus after a bit of a wobble on Thursday (in the tech-sector at least) both the S&P500 and NASDAQ closed Friday at new record highs (up 0.7% and 0.6% respectively) while the USD lost 0.9% in BBDXY terms and 0.7% on the narrower DXY index.

Friday’s heavy slate of economic releases – listed below for the record – had scant influence on markets, the highlights of which were Japan sliding back into outright deflation (judging from the Tokyo numbers) small bounces in Eurozone confidence, and US personal income and spending rising by more than expected but not doubt largely because of underestimation of the sums on the additional unemployment benefit cheques, which remember expired at the end of July to be replaced by smaller cheques under the subsequent Trump executive order. In which resect, a new virus-related fiscal support package remains nowhere in sight.

FX markets were front and centre of attention on Friday

The USD already under modest pressure during the APAC session in contrast to the flat performance on Thursday and given an added kick late in our day by the reports that Japanese Prime Minister Shinzo Abe was going to resign for health reasons and leave office as soon as a successor is appointed. The announcement saw Japanese stocks fall sharply (-1.4% on the day) and the JPY quickly rise by over 0.5%. The logic here is that the ‘three arrows’ of Abenomics – ultra-easy BoJ policy, expansionary fiscal policy and structural reforms – might not survive Abe’s tenure as prime minister. No matter that they have patently failed to achieve their objectives of restoring the economy to health and inflation to 2% since Abe took power in 2012. Yet at least one of the likely contenders to replace Abe has been opening critical of Abenomics, in particular the detrimental effect it has had on Japan’s pensioners struggling to make a return on their retirement savings as well as the rise in Japan’s debt load. Alleviating the economic fall-out from the virus will inevitably remain the near term policy priority, but the choice of successor nevertheless has the potential to weigh on sentiment with regards to the longer term, post-pandemic, policy environment.

No more so that against the NZD and AUD. NZD/USD gained 1.6% Friday to be the best performing G10 currency, even though earlier Friday Bloomberg reported Assistant Governor Christian Hawkesby as saying that the RBNZ also saw scope to let inflation “spend some time above the mid-point of the target range in the future”, following an inflation undershoot, comments which reinforce the lower-for-longer narrative for NZ rates. Proof positive of the overwhelming power of USD volatility in driving individual currency performance.  AUD/USD was not far behind the kiwi, adding 1.5% to a high of 0.7367, its strongest since May 2018.  Elsewhere the biggest contributions to the fall in USD indices came from gains of more than 1% for both the JPY and GBP and a 0.7% rise in EUR/USD, the latter to a high of 1.920, so still shy of its 1.1966 August 18 high.  On GBP there was little impact from BoE Governor Andrew Bailey’s remarks to the virtual Jackson hole symposium on Friday, who claimed “We are not out of firepower by any means”, saying the Bank has considerable room to loosen policy, including by cutting rates into negative territory and expanding the range of assets it buys.

Gold was inevitably a beneficiary of USD weakness, gaining $35 or nearly 2%, as too were base and ferrous metals. Oil was mixed (Brent up but WTI down) .

Europe mostly lower but all of the main US indices higher, as too Shanghai, the S&P 600 just pipping the NASDAQ and Dow to first place. Weekend news of note is that China is looking to ban the export of Artificial Intelligence, a move that potentially threatens the same of Tok Tok’s US operations. The US-China technology cold war is, well, hotting up. Note Apple starts trading on a 4:1 stock-split basis from today, on which basis it closed on Friday at $124.80. It’s taken less than four years to quadruple in value. I don’t own it. Bitter?  You bet.

US bond markets saw nominal yields give back a little of Thursday’s strong rises at the longer end, 10s -2.9bps and the 30-year -0.8bp, but there were bigger falls at the shorter end which had been little affected by Powell’s speech on Thursday. 2s lost 3.1bps and 5s 4.4bps, such that Thursday’s yield curve steepening was left pretty much intact. With little move in break-even inflation rates, this also meant that 10-year real yields are back at -1.03%, having risen to -0.99% on Thursday. 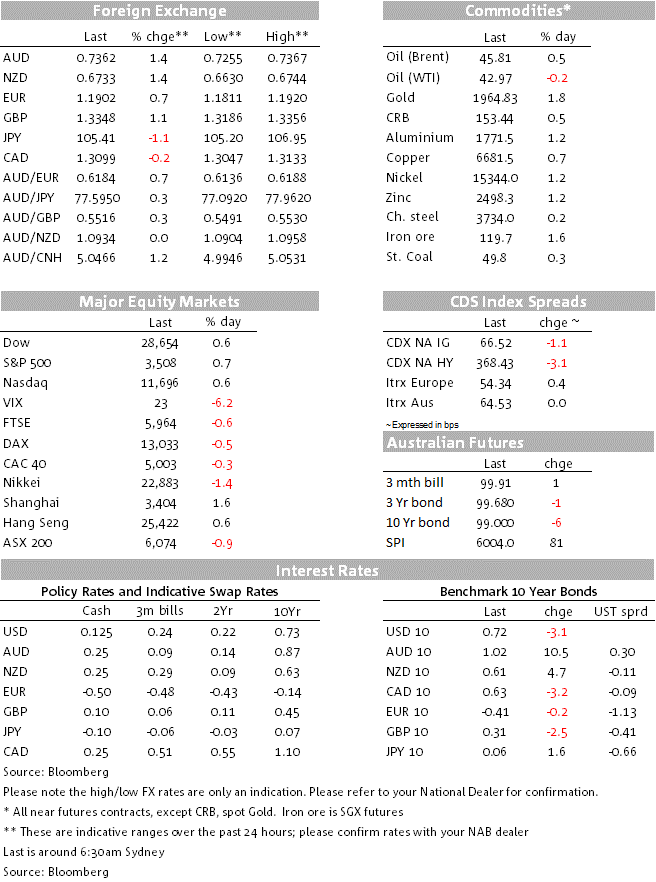