Markets Today: US dollar sinks along with Trump’s hopes

The US dollar hit a two and a half year low on Friday, whilst the Chinese Yuan showed big gains.

“You can tell the world you never was my girl; You can burn my clothes up when I’m gone; You can tell your friends just what a fool I’ve been; And laugh and joke about me on the phone”, Billy Ray Cyrus 1992

Achy Breaky Heart was Billy Ray Cyrus’ debut hit, and also helped spark a line dancing craze that went from country & western to the mainstream. While many have not forgiven Billy Ray for unleashing that song onto the world, context is everything with line dancing’s feeling of solidarity having wide spread appeal during the depths of the jobless recovery from the early 1990s recession. Fast forward to today and markets may be set for their own ‘achy breaky heart’ moment after having ended last week on a positive note on hopes of a US stimulus package being passed this side of the November election and as investors warmed to the prospect of a clear Biden win. Weekend reports though suggest a US stimulus package is less likely in the short term with House Leader Pelosi stating talks are at an “impasse”, while Senate Republicans expressed opposition to the White House’s $1.8 trillion proposal. While many argue markets are forward looking enough that they see a large scale stimulus post-November if Biden wins, a large scale stimulus is also only likely if the Democrats manage to flip the Senate, where polling suggests the race is much tighter than for either the Presidency or the House.

As for market moves

It was typical risk-on in the wake of the White House’s $1.8 trillion stimulus proposal on Friday. The S&P500 rose +0.9% and is up 3.8% over the past week with a clear pivot to cyclicals over the past week (e.g. the small cap Russell 2000 is up 6.4% over the past week). The USD (DXY) fell -0.6% to around 2½ lows at 93.06. Yields although little moved on Friday, are up +7.3bps on the week to 0.77%. The factors behind the move in equities, yields and the USD are the same – Biden’s polling surge reduces the chances of a disputed election, while a Biden Presidency and a possible Democratic clean sweep opens the door to greater fiscal spending. For the USD, a lift in fiscal spending would lift inflation expectations and reduce real interest rates given nominal rates are unlikely to be shifted in the near-term. According to our models, lower US real interest rates have been a key driver of the USD decline since March.

As markets open up

There has only been a mild reaction to the weekend news that has dashed hopes of stimulus this side of the November election. House Leader Pelosi said talks had come to an “impasse”, while Senate Republicans have pushed back on the White House’s $1.8 trillion proposal (“the deal knell for our majority if Pelosi get this win”, and “there’s no appetite right now to spend the White House number or the House number”) (see Politico for details). Those comments do not appear to have fazed markets at this stage with the risk-sensitive AUD opening down just -0.3% lat 0.7220. Overall that suggests markets still have high hopes of a large scale stimulus package, and are indifferent about whether it occurs this side of November or not.

Partly underpinning that confidence is the polls with FiveThirtyEight giving Biden an 86% chance of victory, while he is leading Trump by 9.8 in nationwide polls. Battleground states though are though are much closer with RCP noting Biden’s lead over Trump is only 0.5 points ahead of where Clinton was in 2016. Odds of a Democratic clean sweep have also lifted (PredictIT have it at 0.60 cents), but importantly polling suggests only a slight chance of the Democrats flipping the Senate at this stage (RCP has the Senate at 47 Democrat, 46 Republican and 7 undecided). Accordingly markets should be very sensitive to Senate polling in over the coming weeks given still high expectations for a large scale US stimulus package, which to some extent if not passed before November is contingent on the Democrats flipping the Senate given Republicans Senators are opposed to the current stimulus proposal. In the meantime, scaled down stimulus talks continue.

On Friday, the AUD (+1.1%) and NZD (+1.3%) appreciated sharply, though have reversed some of the moves this morning as the weekend headlines suggesting reduced chance of stimulus this side of November.

The sharp appreciation in the CNY

Seen on Friday (where USD/CNH was -0.9%) has been mostly reversed this morning. Likely driving is a rule change over the weekend by the PBOC which makes it less expensive to short the CNY and signals less concerned about currency weakness. Starting on Monday, the reserve requirement ratio for settling forward forex sales will be cut to zero from the current 20 percent, and China’s Global Times notes the move will boost short-term demand for the US dollar, while holding the offshore exchange rate of the yuan against the dollar within a range of 6.8 to 7.2 in the long term.

Finally in the UK August

GDP disappointed expectations at 2.1%m/m against 4.6% expected. The main disappointment was the softness of manufacturing output (up just 0.7%m/m). The data comes as the UK is set to announce tighter virus restrictions later today. A number of European cities have also implemented tighter restrictions recently, including Berlin, Madrid and Paris.

A big week domestically with RBA Governor Lowe speaking on Thursday, as well as Employment/Unemployment data out the same day:

Offshore three themes set to dominate: (1) Earnings; (2) US election polling; and (3) Brexit with PM Johnson’s self-imposed deadline due on Thursday. There are also some key data points including US Retail Sales on Friday and Chinese aggregate financing figures due anytime in the week. Details below:

A quiet day domestically and offshore. The US has the Columbus Day Holiday which sees the bond market closed, though equity trading remains open. This week also sees the regular IMF/WB meetings with a number of central bank speakers scheduled. For more details, please see below: 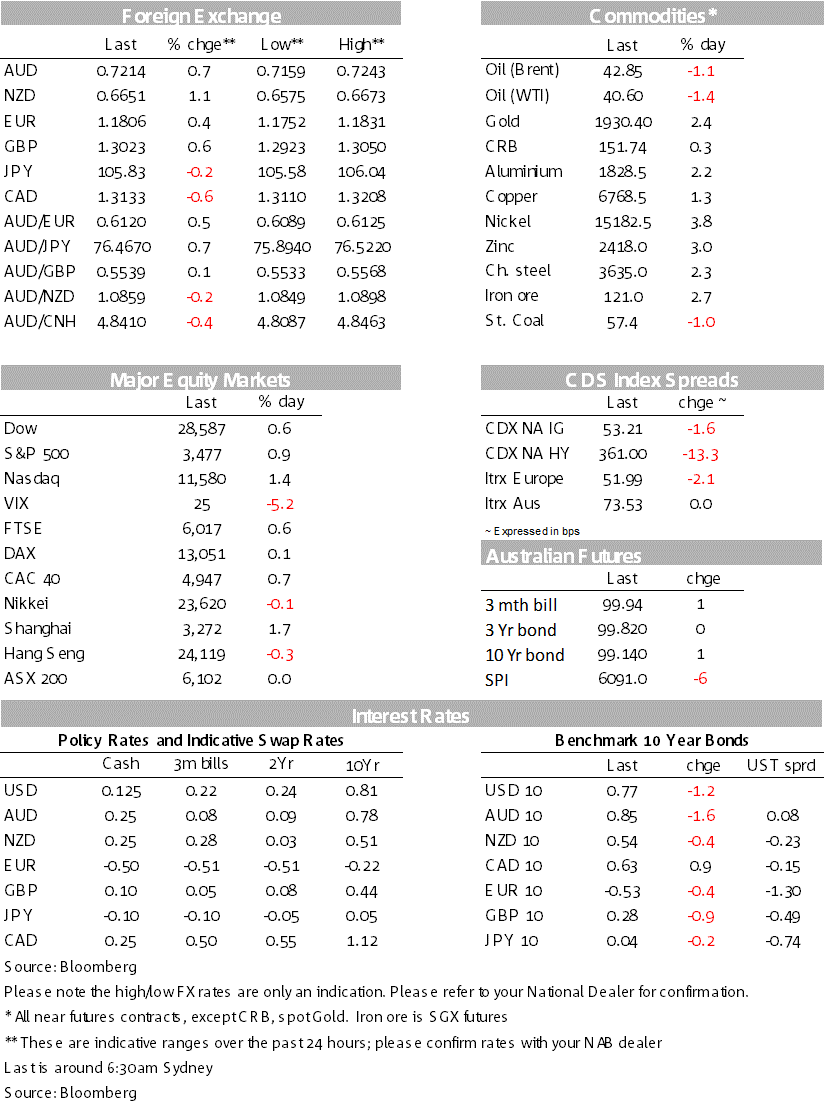