The US has boasted about the economic turnaround evidenced by Friday’s GDP figures.

Overview:  You ain’t seen nothing yet

US Q2 GDP print was the big data event on Friday night and the numbers came in just below expectations at 4.1% (4.2% exp.) with Q1 figures revised upwards. Consumers and exports led the gains during the quarter, but with soybeans leading the rise in exports (+9.3%) and tax cuts behind the consumer, the sense of pay back in Q3 took some of the gloss off the impressive numbers. President Trump was quick to hail the numbers as a great outcome from his policies and along with his economic advisers they have suggested the US economy is well on the path for years of sustained higher growth. Bachman Turner Overdrive classic “You Ain’t Seen Nothing Yet” the perfect song to sum up Trump and Co. message where 3% sustained growth is the number that has been suggested against the Fed longer run growth expectation of 1.8%.

The GDP figures were met with a bull flattening on the UST curve as the 10y rate dropped 3bps to 2.95%, before closing the session at 2.954%.  After threatening to climb above 95 ahead of the data release, the DXY (USD index) shadowed the move lower in 10y UST yields and ended the day at 94.68. The move lower in the USD helped the AUD climb to an overnight high of 74.11, before settling just below the figure, up 0.31%, and the best performing G10 currency for the day. European equities closed higher and tech shares led the decline in the US, with Twitter slumping an eye watering 21%.

Tight ranges have been the theme for most currency pairs in the past week, although it is interesting to note that speculative positioning is starting to look stretched in many pairs, including the AUD where the market has increased its bearish bet, now the shortest since September 2015. The new week is busy with important data release and events, so on paper the potential is there for at least some of these ranges to be challenged.

Although the AUD was the best performing G10 currency on Friday, it still closed lower on the week and it recorded its third consecutive lower weekly close. Not a good look from a technical perspective. JPY was the other outperformer on Friday and also one of the three currencies to outperform the USD on the week. Speculation over a potential BoJ policy tweak supported the yen in the past week, notably however speculators increased their short bet in JPY. CAD has been supported by positive NAFTA sound bites and a dovish ECB weighted on the Euro in spite of a good Juncker-Trump meeting.

European equities closed higher on Friday and tech shares weighted on US equities with Twitter following Facebook’s awful performance, falling 21% on Friday. The NASDAQ was the big loser on the week, down 1.06% while European equities were the big winners reflecting optimism following a truce in trade tensions between Europe and the US.

Early in the week 10y UST yields broke the upper band of their tight 2.80% to 2.89% range  held since late June and managed to close the week at 2.96%, after trading to an overnight high of 2.9857%. In general UST yields closed slightly lower on Friday, but all major tenors rose on the week. 10y Core global yields lagged the move in 10y UST yields, but still closed the week higher. Ahead of the FOMC meeting Thursday morning, pricing expectations for a September hike have held above 90%.

It was a quiet Friday for commodities with the 1.3% decline in WTI oil and 0.6% decline in copper the highlights. On the week aluminium was the big winner up 2.07% leading the gains within metals, copper was up 1.67% and again WTI the big loser down 2.51%. 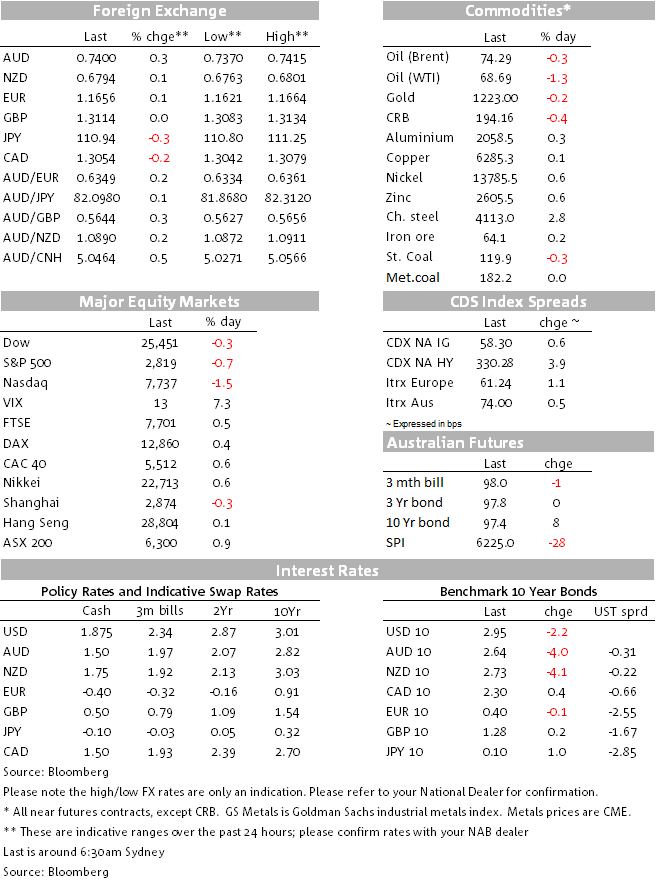