US equities felt the heat on Friday with news that the Trump administration was looking at new ways of limiting investment in China.

Without segue, the single biggest piece of news from the weekend was the Tigers grand final win over the Giants 114 v 25 in what is likely the most dominant grand final win ever seen in AFL. Coming a close second and more important for markets was a US media report on Friday that the Trump Administration was discussing ways to limit US investors’ portfolio flows into China (including via Chinese companies listed on US exchanges). The initial headlines sent equities into a spin with the S&P500 down some -1.4% at one point, before paring losses to end -0.5%. Details of the report though suggested divisions within the administration and a Treasury official said there are no current plans to stop Chinese companies from listing on US exchanges. FX moves were largely modest with the USD (DXY) -0.1%. USD/CNH did initially rise +0.5% on the headlines, though pared moves to be around 0.2% higher since Friday. The AUD and NZD though were little moved with  AUD +0.2% to 0.6761. Moves in yields were also contained with US 10yr yields -1.2bps to 1.68%.

First to the plans to block Chinese listings

Media reported that the Trump Administration was discussing ways to limit US investors’ portfolio flows into China with Kudlow having chaired inter-agency meetings. There were many options discussed including limiting government pension funds and ways to put caps on Chinese companies on US exchanges. The reports though also revealed fairly sizeable divisions between hawks/doves and the notion of limiting investments into China has been floated previously with the main focus on closing loopholes on US reporting regulations. Subsequently the US Treasury stated there were no current plans to stop Chinese companies from listing on US exchanges. For reference there are 156 Chinese listed firms on US exchanges with a combined market cap of around $1.2 trillion  Markets initially reacted sharply, (S&P500 -1.4% at one stage) though pared some the reaction with the S&P500 closing -0.5%. Markets are likely trading with the view that if the US did limit portfolio flows, then China could retaliate given it is the number 1 holder of US Treasuries. Reflecting that, yields also only had a modest reaction to the news with 2-year yields -3bps to 1.62% (now 1.63%), while 10yr yields fell 1bps to 1.67% (now 1.68%).

Despite the ongoing trade uncertainty, US economic data also continues to be resilient. Core durable goods were a bit above consensus (ex-transport +0.5% m/m against 0.2% consensus), though Core capital goods fell (-0.2% against 0.0% expected). Real personal spending was below expectations at +0.1% m/m against 0.3% expected. The PCE deflator was largely in line with the m/m slightly below consensus at the rounding at 0.14% m/m against 0.2% expected, but as expected in annual terms at 1.8% y/y.

Fed talk continued to emphasise a measured approach to future rate cuts. The Fed’s Harker (non-voter) stated “My own view is that we should hold firm, letting things settle and watching out events play out”. Importantly he noted he was open to further cuts, though this would require a deterioration in the harder data (“What I worry about, though is if we start to see those things drift down significantly I would be open to a rate cut, but not now”). The Fed’s Quarles also made similar comments. Fed pricing for October is now just 43%, though is still well priced for December at 73%.

BoE talk in contrast has turned dovish with former hawk Saunders stating the UK may need to cut rates in the likely scenario that high levels of uncertainty persistent even in the event of a no-deal Brexit being avoided. Formally, many people expected the BoE to hike rates once a Brexit deal was granted, though a deal is now unlikely to be comprehensive enough to remove uncertainties over the future UK-EU trading relationship. GBP fell some -0.4% initially and is now -0.3% to 1.2299. Pricing  a BoE rate cut by September 2020 also extended with a cut now 96% priced compared to a 60% chance prior to the comments

CFTC data revealed positioning remains very much long USD / short everything else. Net-long positions in USD were 129,033 contracts, the highest since late June, while Euro net-shorts were the most bearish since June. Shorts in NZD and AUD were also extended with investors increasing their net short position in the NZD to a record 39,598 contracts and leaves both vulnerable to a short squeeze on better data/news. As for the AUD, the key resistance level lies around 0.6850 and the AUD is vulnerable to a squeeze higher in the event of a rosier RBA on Tuesday or better than expected Retail Sales on Friday.

For the RBA on Tuesday, NAB (along with most other forecasters) expect the RBA to cut rates to 0.75%; markets around 79% priced and around 74% of economists surveyed expect a rate cut. Assuming the RBA cuts, the focus will then be on the post-meeting Statement and Lowe’s Board-dinner speech and whether any guidance is given to future moves. The risk is the Statement itself is largely neutral despite the RBA having cut rates, while Dr Lowe has consistently given an optimistic tone, repeating his “gentle turning point” phrase at his most recent speech.

The Aussie housing market continues its recovery with the preliminary auction clearance rate 74.4% compared to 45.8% this time last year. There was though a significant drop in the number of auctions, largely due to the AFL Grand-final. On housing it is worth noting the comments by Treasurer Frydenberg on Thursday where he is partly hoping that rising housing wealth will help lift growth (in the speech he noted a 10% rise in house prices could boost GDP growth by 0.5%), while also stating responsible lending laws could be being applied too stringently – see the Treasurer’s full speech for details.

A big week ahead domestically with a likely RBA rate cut on Tuesday (79% priced) and then to Retail Sales on Friday to help confirm whether households spent their recent tax cuts. International focus will be on China’s PMIs out later today, and then to the US ISM on Tuesday and Payrolls on Friday. There are also a number key geopolitical events under focus including Brexit and the Trump-Ukraine impeachment inquiry. Highlighting the political nature of impeachment a CBS NewsPoll suggests 55% of Americans support an impeachment inquiry, but importantly this is mainly driven by Democrats at 87% compared to Republicans at 23% – those with no affiliation were pretty much 50/50 on the issue. Note China has Golden Week holidays from October 1-7 which is likely to keep Chinese developments relatively quiet.

In terms of today, it is a relatively quiet day domestically with only Aussie Credit Figures, while across the ditch NZ has the ANZ Business Confidence. Focus then shifts internationally with the China PMIs (official and unofficial Caixin) and then to the German CPI and to the US Chicago PMI – the final regional manufacturing index ahead of the more important US ISM tomorrow: 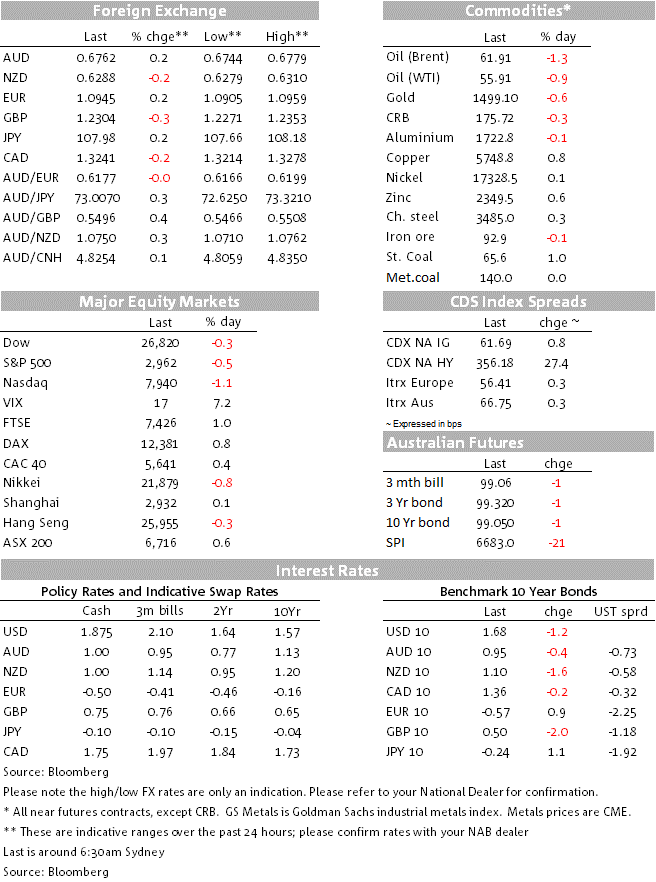