Markets Today: US heads for fiscal cliff as confidence slides

The US is no nearer to reaching agreement on their fiscal stimulus package.

Cautious mood overall with negotiations continuing over a US fiscal package and as the market waits for the FOMC and key earnings reports from the tech sector (Thursday sees Alphabet, Amazon, Apple and Facebook). The S&P500 fell -0.6%, bonds rallied (US 10yr -3.9bps to 0.58%), while the USD rose slightly (DXY +0.1%) with the AUD outperforming (+0.3% to 0.7158) and tracking the gold price. Coming up today is Australian Q2 CPI figures (likely less market moving than previously) and the FOMC. Good luck.

“Pause, take a breath and go for yours; On my command now hit the dance floor; It’s gonna make you sweat ’til you bleed”, C+C Music Factory 1990

“Gonna Make You Sweat” was the 1990 viral dance-pop hit widely praised for its post-disco vocals and which has survived to become pop culture cliché. So it is with negotiations over the US fiscal stimulus package with three sides (White House, House and Senate) still at loggerheads. One Republican described negotiations as “a mess” (see Politico for details) and a deal may not eventuate until next week. However, given the election proximity we doubt many senators or representatives want to hit the campaign trail empty handed. Markets are cautious given the uncertainty, with two other key events also on the horizon – the FOMC later tonight (4.00am AEST) and key tech earnings on Thursday which sees Alphabet, Amazon, Apple and Facebook. The S&P500 fell -0.6% with tech underperforming (IT subindex -1.2%), along with disappointing earnings from McDonalds (-2.5%) and 3M (-4.8%).

Bond yields fell with US 10yr yields -3.6bps to 0.58%, helped along by a strong 7yr auction, while the yield curve continues to flatten with 2/10s -2.5bps to 43.7bps. Also in rates news, The Fed extended most of their emergency lending programmes by three months through the remainder of 2020 (see link for details). There was little market reaction as there has been little take-up of these programmes – some $100bn compared to the theoretical limit in the trillions – but it was a signal that the Fed remained inclined to offer ongoing support to the economy.

FX moves have been mixed with the USD slightly stronger with DXY +0.1%

The major drivers were the Euro likely consolidating after its sharp rally (EUR -0.3%), while GBP rose +0.4% with no apparent driver. Safe haven’s saw a slight bid with USD/Yen -0.2% to 105.11 and USD/CHF -0.3% with the Swiss Franc briefly touching its strongest level since June 2015.

The AUD bucked the trend, up +0.3% to 0.7158 and tracking the intraday move in the gold price – AUD recovering from yesterday’s dip in the gold price (gold itself recovering to $1,960 after losing a $47 after hitting a record high of $1,981 early yesterday). The NZD didn’t recover though from the dip in gold (gold’s intra-day moves appeared to be a catalyst for moves yesterday) with the NZD -0.3% to 0.6654.

First to US stimulus negotiations

The Republican GOP’s $1Tn coronavirus relief bill was met with little enthusiasm by Democrats with that proposal reducing the current Federal unemployment benefit supplement from $600pw to $200pw and includes another one-off $1200 payment to households. The proposal is well short of the $3.5Tn bill already passed by the Democratic-led House. Negotiations will continue over coming days. Politico reports Republicans are divided, while most do not want to head home for the August recess empty handed given the proximity of the November elections. As such a deal is still likely and markets are still expecting a deal and no fiscal cliff edge.

US consumer confidence fell by more than expected in July to 92.6 from 98.3, led by a significant drop in the expectations component. No real surprise given the rise in virus cases and the re-imposition of restrictions in some states. The Richmond Fed Manufacturing Index in contrast rose more than expected to +10 from and suggests manufacturing activity expanded in July.

Yesterday’s weekly payrolls suggests the labour market weakened in July. Payrolls have now fallen 1.1% over the month to mid-July and a crude seasonal adjustment suggests a 90k fall in official employment in July, reversing around 40% of the 2011k rise in employment in June. Victoria saw the steepest decline in Payrolls, but so did other states except for WA. In more positive news, Victorian virus cases appear to have tentatively peaked with 385 cases yesterday, down from 532. NSW’s track and trace appears to be working effectively. 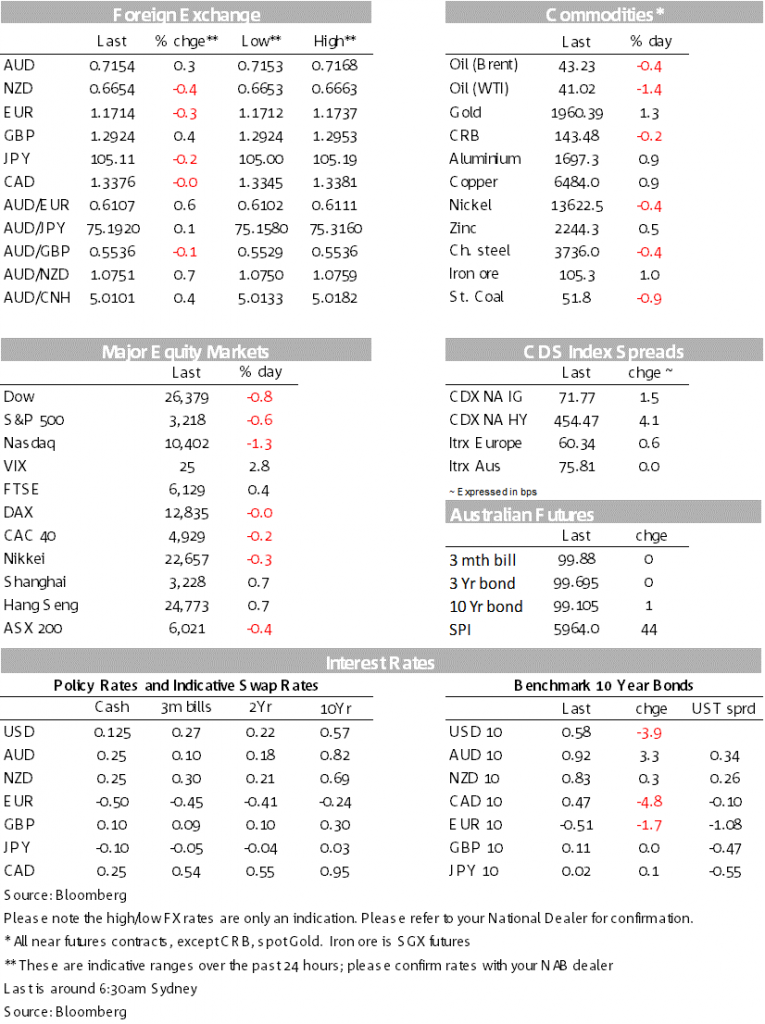