In the US the non-manufacturing ISM read came in a lot lower than expected.

The first tangible evidence that the US service sector, representing some 88% of the US economy, is following the manufacturing sector down has been revealed in the non-manufacturing ISM survey overnight, printing 52.6 down from 56.4 in August (and 55.1 expected).  Still above 50 of course, but equally or perhaps more alarming, the Employment sub-index dropped even more sharply, to 50.4 from 53.1.  While probably more relevant to next month’s October official employment data than tonight’s September readings, this sends a clear warning that much weaker payroll growth lie ahead.

The weak headline and employment ISM readings in turn look to reflect a concern among service sector firms that in the face of the actual, and planned scaling up, of tariffs on consumer goods household spending on goods (and services) not subject to tariffs, is set to suffer. As our friends at Pantheon Economics note, the widening wedge between the non-manufacturing ISM numbers and core retail sales, plays heavily to this narrative.

The market impact from this latest ISM report has been no less dramatic than to Tuesday’s manufacturing version, but different in key respects. In particular, US equities have closed with gains of between 0.5% and 1.1% (S&P 500 +0.8%) in contrast to Tuesday’s losses of more than 1%.  This appears to reflect more than just heightened expectations of more Fed easing in the coming meetings (43bps of cuts are now priced before the end of the year, and a 25-point October 30th cut at 90%).  It may also reflect a view that President Trump, in the face of clear evidence that the trade dispute is negatively impacting the US economy and beyond just the manufacturing sector,  will be somewhat more inclined to cut some sort of trade deal with China well ahead of the 2020 elections. It is somewhat notable in this respect that the AUD and NZD are the two best performing G10 currencies in the wake of the ISM report, far outpacing what is now a mere 0.12% drop in the narrow DXY USD index.  Both currencies are 0.5% up on this time yesterday, at 6742 and 0.6302 respectively.

Both the EUR and GBP are firmer, despite poor economic data, in the case of the Eurozone in the form of final PMIs that came in lower than the ‘flash’ estimates earlier in the month (the Composite read is now 50.1 from 50.4 and led by even bigger falls for Germany, whose Composite index is now 48.5 from a preliminary 49.1). The one-and-only UK services PMI print came in below expectations at 49.5 from 50.5 with its Composite reading 49.3 down from 50.2 in August.  A stronger GBP seems more likely to reflect the fact that the EU, and Irish government, have not rejected out of hand the UK government’s latest Brexit proposals related to the Irish border, even though they are described as being ‘problematic’.

AU retail sales is the domestic highlight this morning (11:30 AEST). After a poor July, when retail trade fell by 0.1%, we expect a modest rebound in August with the NAB cashless retail sales series pointing to a 0.3% gain (consensus: 0.5%).  This is a small rise given that the tax office has said that an extra $3.2b worth of net refunds had been paid in the 9 weeks to 3 September, relative to the previous year.   We are mindful of the uncertainty around our estimate, with the risk that sales could be stronger, although the Reserve Bank minutes reported that “liaison with retailers suggested that [the tax cuts] had yet to lift spending noticeably”.

The RBA’s Financial Stability Review comes out at the same time.  Governor Lowe in his speech on Tuesday highlighted three aspects of the FSR of particular interest:  (i) A risk event or shock could cause the sudden repricing of credit spreads, which are currently quite low; (ii) The banking system is well placed to withstand shocks, but Lowe warned that the tightening in lending standards may have, “swung a bit too far” and caused a slowdown in lending to small businesses; And (iii) Housing arrears have risen, but many households have a large savings buffer in their offset accounts and that mortgagees on average are 2.5 years ahead on their capital repayments, equivalent to 16% of household mortgage debt.

It’s US employment, where the consensus for non-farm payrolls is 148k (after +130k in August) and for an unchanged 3.7% unemployment rate and too unchanged 3.2% annual growth rate for average hourly earnings.

US trade data are also due (seen little changed near -$54bn) and in Canada the Ivey Purchasing Managers Index, last at 60.6. 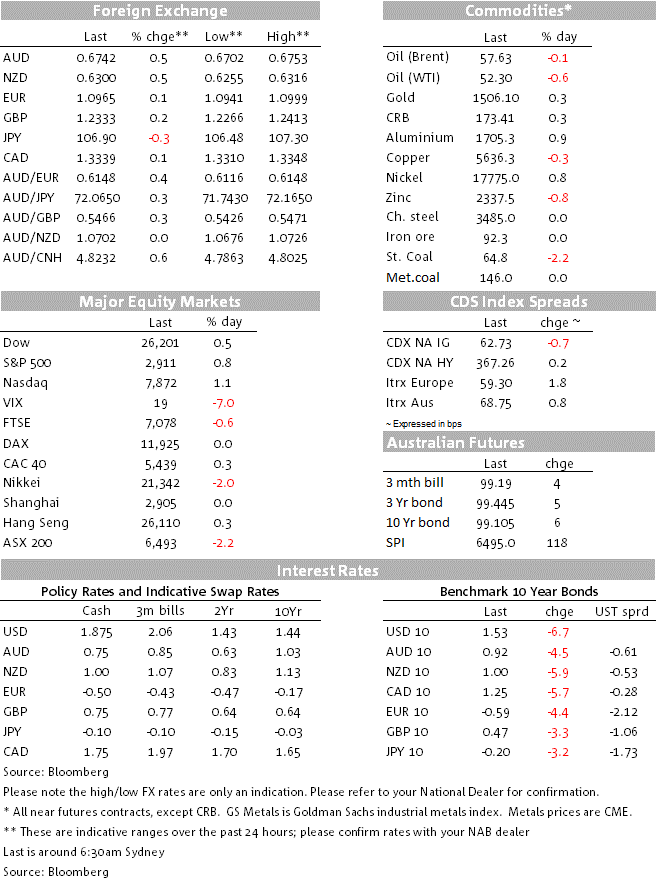 The US dollar continued to rise yesterday, after the hawkish comments from the Fed.

Growth slowing as base effects wash away; consumers continue to lag industry.