The US dollar is weaker today on the back of positive developments in other parts of the world.

Overview: walking on a dream

Markets had a dream run overnight with a trio of favourable geopolitical events: (1) Hong Kong has said it will formally withdraw the proposed extradition bill that sparked the initial wave of protests; (2) UK lawmakers have passed a bill to delay Brexit by 327 votes to 299, with debate moving to the House of Lords; and (3) A new Italian government has been formed with Conte back as PM and former EU economic and monetary affairs chair Gualtieri as FM. In the words of Empire of the Sun’s 2008 hit, markets are “walking on a dream”.

Improved risk sentiment has seen broad-based declines in the USD with the DXY -0.5% to 98.46. The biggest mover was GBP +1.3% to 1.2253 as markets price out the risk of a near-term no-deal Brexit. The offshore Yuan rallied with USD/CNH -0.5% 7.14, also helping to lift the AUD further after its initial boost from the on-consensus GDP print (AUD +0.6% to 0.6794). The other significant mover worth noting is the Loonie with USD/CAD -0.7% as the BoC failed be as dovish as markets expected and as WTI oil surged 3.8% to $55.98. In rates, it was a tale of two halves with European yields higher on improved sentiment (UK 10yr Gilt yields +8.6bps to 0.487%), while US yields were largely unchanged (US 10 year +1.2bps) with dovish Fed comments likely helping to contain moves. Equities also rose sharply with the S&P500 +1.1% to 2,938 with sizeable gains in IT and energy.

First to Hong Kong. Leader Carrie Lam has moved to formally withdraw the proposed extradition bill, the initial issue that sparked the current wave of protests. While it is an encouraging sign, it is too early to tell whether it will be enough to end the demonstrations. One of the protest leaders Joshua Wong said it was only addressing one of the five demands by protestors and that it was “too little too late”. Chinese press also signal a degree of caution with the Global Times noting “the move should not be seen as a cession by Lam that could lead to a slippery slope, and radical forces should not have any illusion of winning ground on matters related to the one country, two system principle that governs Hong Kong”. We would also caution drawing any parallels to the US-China trade dispute with no signs of a near-term deal on the horizon with strong rhetoric from both sides.

GBP has continued to surge, up some 1.3% to 1.2253 as markets price out the risks of a near-term no-deal Brexit. UK lawmakers overnight passed a Brexit extension (to 31 Jan 2020 if no agreement is reached by Oct 19) in the House of Commons by 327 votes to 299, with it now moving the House of Lords. PM Johnson attempted to call an early election, but this was rejected by Parliament with opposition parties wanting the Brexit extension to be fully legislated before heading to the polls – note under the Fixed Terms Parliament Act 2/3rds of MPs need to vote for an early election (he got 298, short of the 434 required). The possibility of a General Election though remains a near certainty, with a multitude of possible outcomes. Also in the UK BoE Governor Carney ruled out currency intervention to support sterling in the event of any collapse and also reiterated the BoE would not pre-commit to any policy response in the event of Brexit – though his preference is to ease if there were to be a no-deal.

Italian bonds continue to rally hard with 10yr BTP yields -6.5bps to 0.805%. A new Italian government has been formed with Conte back as PM in a coalition between Five star and the Democratic Party. Importantly for rates markets, the FM is going to be Roberto Gualtieri from the Democratic Party, a former chair of the European Parliament’s committee on economic and monetary affairs. With more positive sounds from the UK and improved Italian sentiment, most European government bond yields were higher. UK 10yr Gilt yields rose 8.6bps to 0.487%, while German 10yr Bunds rose 3.0bps to -0.68%. Comments by the ECB’s Lagarde had little impact – Lagarde stated “a highly accommodative policy is warranted for a prolonged period”.

US yields were little changed. While initially moving higher before the NY open, they unwound most of the moves with US 10yr yields +0.8bps to 1.47%. Dovish Fed commentary has kept alive the possibility of further US Fed rate cuts with the Fed’s Bullard (voter, dove) arguing “we should have a robust debate about moving 50 basis points at this meeting…It’d be better in my mind to go ahead and get realigned now”. The Fed’s Kaplan (non-voter, centrist) also played into this view and while he was waiting to see whether the weakness intensifies, he noted “if the Fed and policy makers waited to see that weakness in the consumer, that’s probably too late”.

In other FX moves the Loonie rose sharply with USD/CAD -0.8% to 1.3224. While the BoC kept rates on hold as expected, commentary was not as dovish as many had expected with the BoC concluding “the current degree of monetary policy stimulus remains appropriate”. Nevertheless, reading through the statement it was clear there were plenty of qualifiers and the likelihood of an October rate cut thus remains high – markets are around 50/50 on an October rate cut.

USD/CNH has moved lower, -0.5%  7.1664. Better sentiment out of Hong Kong has supported along with speculation of further RRR cuts. Yesterday the Caixin Services PMI for August rose more than expected to 52.1 against the 51.7 consensus and 51.6 previously. While beating at the headline and the strongest in three months, the index remains just below long-run average levels and well below the levels seen in early 2019.

Finally in Australia, Q2 GDP yesterday came in line with the consensus at 0.5% q/q and 1.4% y/y. While matching expectations, growth was well below the RBA’s 0.8% q/q expectation contained in its August SoMP. Details within the GDP report were also not encouraging with domestic demand barely growing. The dynamic of weak household consumption and declining dwelling investment will likely play out for some time. This ongoing challenge underscore the need for further monetary easing, with a move to some form of unconventional policy on the cards next year, particularly with the government seemingly reluctant to abandon its surplus objective to provide fiscal support.

Domestic focus will be on the Australian Trade Balance, then all focus on the US where we get ADP Employment and the Non-manufacturing ISM: 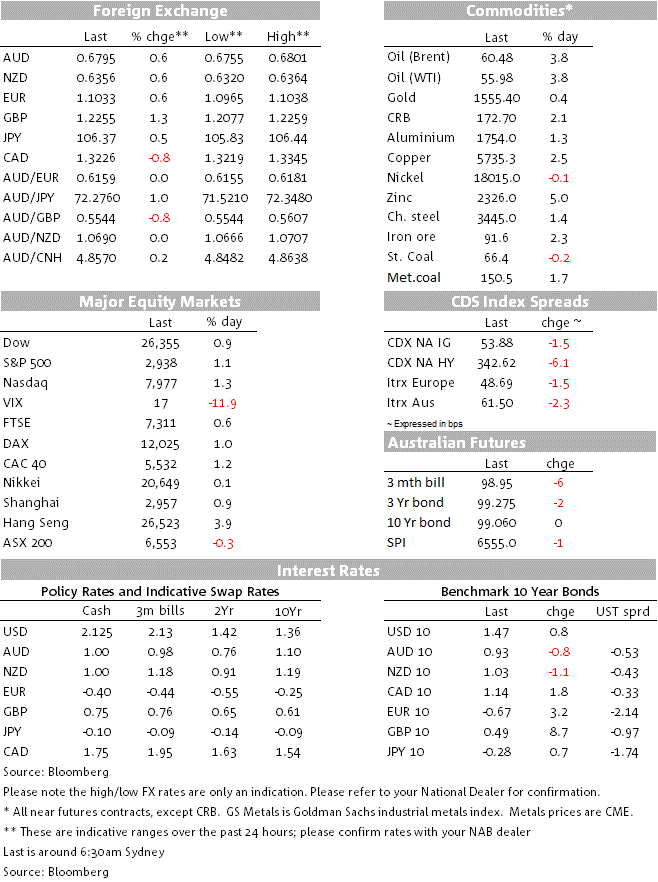