Shares climbed in the US on the hope Pfizer will have a vaccine ready by the end of the year.

This one’s optimistic,This one went to market

This one just came out of the swamp, This one dropped a payload – Radiohead

A bout of company deals alongside positive development in the vaccine front have triggered an optimistic start to the new week by US equities. The USD has lost some of its safe haven bid with NZD the outperformer while the AUD has lagged behind on speculation the RBA could be about to ease monetary policy further.

US equities have started the new week with decent gains following positive vaccine news over the weekend and a series of company deal announcement over the past 24 hours. On Sunday, Pfizer chief executive officer said his company could deploy a Covid-19 vaccine before the end of the year – Phase 3 results likely by end of October while AstraZeneca’s clinical trials for a vaccine are set to resume in the UK  after its recent hiccup ( US resumption has not yet been confirmed).

TikTok walked away from a sale proposal with Microsoft choosing a partnership option with Oracle instead. Terms of the proposal have not yet been made public, but Bloomberg suggests Oracle could take a stake of a newly formed US business becoming TikTok’s US technology partner and housing TikTok’s data in Oracle’s cloud servers. The deal needs to be ratified by the Committee on Foreign Investment in the US and then President Trump will make the final decision. This is expected to a be formality given the close ties between Oracle’s Ellison (“a tremendous guy”) and Trump.

That said, worth noting too that China also needs to approve the deal, but given the deal is not a sale, but rather a partnership, approval expectations are high. A number of other corporate deals have also been announced including high profile companies like Softbank, Gilead Sciences, Nvidia, Verizon and Alibaba.

So against this backdrop of deal making and vaccines hopes

The NASDAQ closed the day 1.87% higher while earlier in the session EU equities closed mixed but mostly higher.

The Stoxx Europe 600 Index ended Monday 0.2% after swinging between gains and losses during the session.

NZD is the G10 outperformer on a day where the USD is broadly weaker given the improvement in risk appetite. In addition to the improvement in risk appetite, NZD’s outperformance can probably be partly attributed to news that the NZ Government is looking at easing virus restrictions, although we suspect the AUDNZD underperformance played a bigger role on the flying kiwi amid selling pressures on the cross, more on that below. NZD now trades just above the 67c mark and is up 0.53% over the past 24 hours.

The NZ government extended current alert level restrictions for at least another week across the country, with a view towards allowing increased gathering sizes in Auckland from Wednesday next week (a move from alert level 2.5 to 2) and reducing the alert level from 2 to 1 for the rest of the country in a week’s time. The light at the end of the tunnel now looks more certain and the NZ economy can now begin to look at improvement in activity.

The AUD has been a modest achiever against a broadly softer USD, up 0.1% to 0.7287. The AUD’s lacklustre performance over the past 24 hours can be attributed to a couple AFR articles, seemingly well “sourced”, suggesting the RBA was considering further monetary policy easing by buying federal and state government bonds further along the yield curve to bring interest rates down, complemented with a cut in the cash rate from 0.25% to 0.10%. This saw selling pressure on the AUD and gains in the NZD, suggesting closing of long AUD/NZD positions might have been a factor.

GBP is close to the top of the G10 board

Up 0.44% and now trading at 1.2846. PM Johnson is aiming rewrite part of the Brexit divorce deal. In his first parliamentary debate on his Internal Market Bill he argued that the legislation is “essential” for guaranteeing the economic and political integrity of the UK. The PM is facing growing opposition from within his own party and it remains to be seen if the Bill will be passed within the hour. That said this is just a side show to the EU-UK trade negotiations which still have some way to run over coming weeks. GBP volatility seems like the only certainty.

JPY has also performed against the USD

(+0.44%) with USDJPY now trading at ¥105.71. Japanese Chief Cabinet Secretary Suga was elected leader of the ruling LDP and will replace PM Abe. Suga pledged to maintain Abe’s key policies, including ultra-easy monetary policy, more fiscal policy and bringing reform to areas where it is needed. Policy continuity might have been a factor in support for JPY.

Movements in core global yields have been rather subdued with 10y UST yields little changed at 0.6773%. Speculation around the possibility of further RBA easing has played into the outperformance of the 10y AU Bond futures, down 4,1bps in yield terms over the past 24hours. 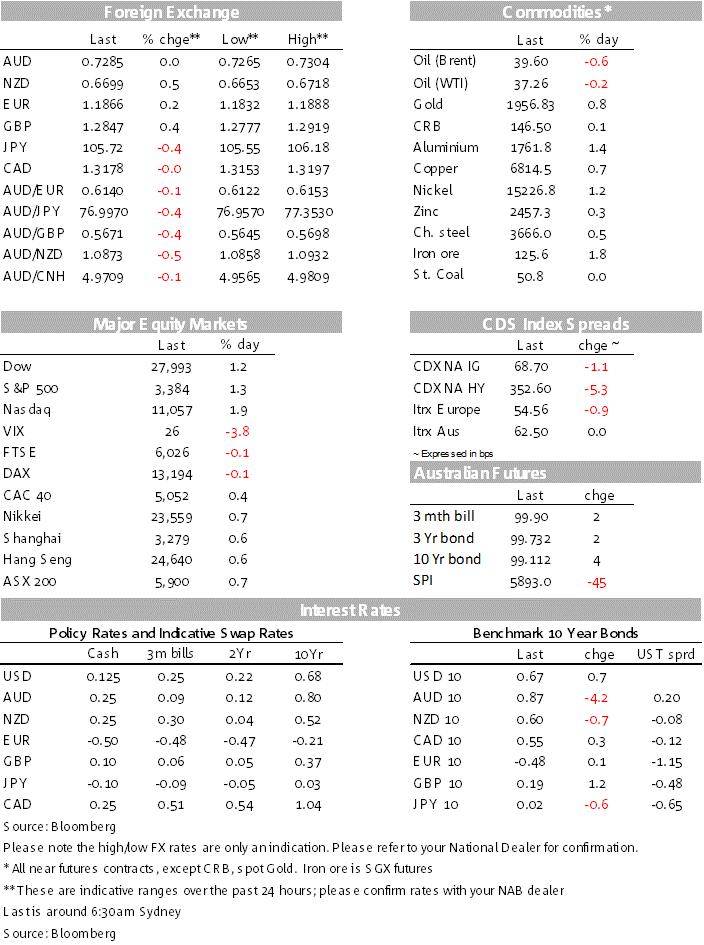