The US dollar lost a lot of ground last week as Congress argued over the shape and form of the next recovery package.

Overview: Up in the air

I’ve been up in the air, Out of my head

Stuck in a moment of emotion I’ve destroyed

Is this the end I feel? – Thirty Seconds to Mars

The negative lead from Asia, following China’s decision to close the US consulate in Chengdu, was compounded on Friday night amid mounting COVID-19 cases in the US and other parts of the world. EU and US Equities end lower on Friday and weaker on the week, the USD still can’t find any loving, underperforming against both safe haven and risk sensitive currencies. Gold on the other hand continues to shine trading above $1900, for the first time since 2011. AUD opens the new week softer (@ 0.793) as Victoria COVID-19 infections spike again on Sunday.

China’s announcement, during our Friday session, that it would close the US consulate in Chengdu in response to the US decision to shut China’s Consulate in Houston, weighed on sentiment and triggered a big sell-off in China’s equity market with the CSI 300 index falling 4.4% on the day. COVID-19 cases remain elevated in the US (more below) and despite some progress, Republican were unable to present a stimulus proposal on Friday.

So a negative lead from Asia, alongside rising concern over a stalling US recovery and lack of agreement  by Senate Republican was too much for equity markets. IT shares also came under added downward pressure following a collapse in Intel shares (-16%) after the company warned about another production delay to its new chipmaking process, saying that it was mulling outsourcing chip production.

Unlike recent spikes in risk aversion, this time the USD did not benefit from safe haven demand with both safe haven pairs such as JPY and CHF and risk sensitive currencies such as the AUD and NZD gaining ground on the big dollar on Friday. JPY was the big mover during our session on Friday breaking through key support around £106.70 on the China news and then overnight as 10y UST yields traded to an intraday low of 0.5545% (more below), USD/JPY briefly traded to a low of ¥105.69, before ending the week at ¥106.13.

The euro currency continued its recent strong run on Friday

Rising 0.5% to above 1.1650, its highest level since September 2018.  The union currency gained 2% over the week, with markets reacting positively to the agreement on the €750b EU Recovery Fund. On Friday night, the flash PMIs added to the positive sentiment, with both services and manufacturing sectors returning to growth in July.  The services PMIs in Germany and the Eurozone were much stronger-than-expected, although this part of the economy was hit much harder than manufacturing during the lockdowns.

AUD and NZD traded lower during our Friday session

Looking at the week

The FX theme was the broad USD weakness and ongoing EUR recovery. The Bloomberg USD index fell 0.4%, bringing its cumulative decline over the week to 1.3%.  It is near a 12-month low.  The resurgence in positivity towards the EUR is one factor behind the recent fall in the USD, although declining interest rate differentials (especially for real, i.e. inflation-adjusted, interest rates) have also weighed on the USD.

The market is also concern over the inability of US politician to find an agreement on the next round of stimulus ahead of the expiry of US unemployment benefits this Friday. Republican senators are set to reveal their draft fiscal stimulus bill today, with US Treasury Secretary Mnuchin saying that they would propose a cap on unemployment benefits of 70% of prior wage income (compared to a flat $600 extra payment).  The new fiscal stimulus bill, which needs agreement from Democrats, will include a proposed new round of cheques for $1,200 sent directly to certain households according to the FT.

Mnuchin also noted that  he expected Republicans could move very quickly with the Democrats to reach an agreement. But bipartisan talks can only begin once the Senate Bill is put forward, sounding optimistic Mnuchin added, “If there are issues that take longer, we’ll deal with those as well.”. But as the WSJ quotes, Senate Majority Leader Mitch McConnell (R., Ky.) sounded less optimistic, “Hopefully, we can come together behind some package we can agree on in the next few weeks,” Mr. McConnell said Friday

There was little reaction to the US PMIs

Which showed more modest improvements than expected, with the services sector remaining in contractionary territory.  The market tends to put more weight on the ISM surveys in the US, although the smaller-than-expected bounce in the services PMI is consistent with other high frequency indicators (including weekly jobless claims) that suggest the US recovery is showing signs of stalling amidst the resurgence in COVID-19 across multiple southern and western US states.

US new cases remain very high (new daily cases haven’t been below 60,000 in a fortnight) but are showing tentative signs of stabilising.  There are also concerns about a second wave in Spain, particularly in the region of Catalonia.  Catalonia’s regional government announced it would close all nightclubs for two weeks while the UK said it would require all visitors to Spain to self-isolate for 14 days on return.  Meanwhile, the Australian state of Victoria reported 459 new cases of COVID-19 on Saturday, its second-highest daily total.  Melbourne is almost half way through its 6-week lockdown.

Finally a word on commodities

It has been a glittering week for gold with the pressures metal outperforming on Friday and on the week. Gold traded ato an overnight high as 1,905 and closed at 1.900 ( 0.66%). It was Gold’s seventh weekly gain the highest weekly close ever andnext stop ios the all-time high at 1,920. 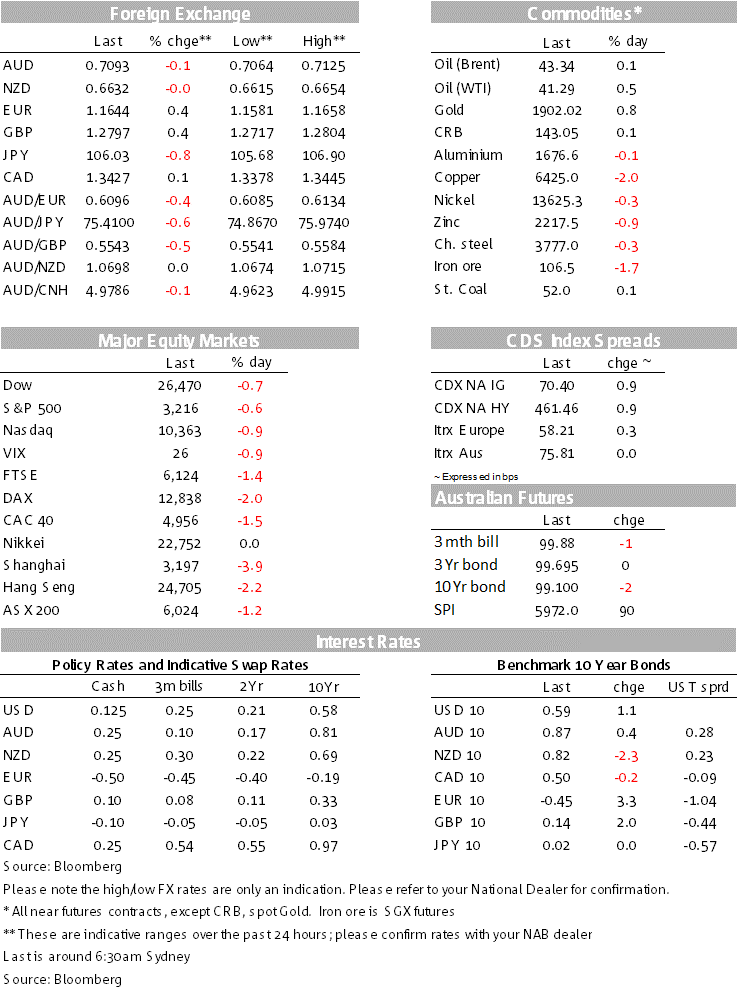 The global economy continues to recover from the impact of COVID-19. However, there is still a long way back with progress. In Australia, we have downgraded our forecasts due to the containment measures in Victoria.

The AUD/USD in July was a tale of two halves.

Jobs data is confusing right now. How much is it influenced by government stimulus activity?