Is Germany on the brink of a recession?

That is the question on the lips of the market after the German Manufacturing PMI disappointed, coming in at 41.4 and the weakest in 10 years. More worryingly for the outlook, the weakness in the manufacturing sector is now starting to be being felt in the services sector. EUR unsurprisingly was weaker overnight, down some -0.5% initially before clawing back losses to be -0.2% at 1.0997. Bonds rallied on the news with German 10yr Bund yields ‑6.0bps to -0.58% and UK Gilt yields -8.1bps to 0.544%. Moves in US yields were more subdued on net and while lower European rates did drag down US yields initially, US 10yr yields finished largely unchanged at 1.72%.

First to the PMIs

The German Manufacturing PMI came in at 41.4 against 44.0 expected and 43.5 prior. The 41.4 read is the weakest read in 10 years with the survey noting “slumping manufacturing orders led the decline” while the auto sector was highlighted as a particular source of weakness (see Markit report for details). The more concerning part of the report was that the larger services sector now appears to be feeling the chill from the manufacturing slowdown with the services PMI weakening to 52.5 against 54.3 expected and 54.8 prior. Given the weak PMIs, it is possible Germany may have entered a mild technical recession in Q3 – something the Bundesbank flagged as a risk in their latest monthly report. Despite this possibility, prospects of fiscal stimulus remain dim. As one German economist put it recently “the government should only act if there is clear evidence that we might be at the brink of a deep recession” and that “Anglo-Saxon” policy makers were wrong to believe that policies could sustain economic expansions indefinitely”. Outgoing ECB President Draghi for his part continues to advocate for greater use of fiscal policy, noting “the longer the weakness in manufacturing persists, the greater the risks that other sectors of the economy will be affected by the slowdown”.

Fed speak overnight leant to the dovish side, but also played into the view of the Fed not willing to take aggressive policy action. This notion, along with continued US data outperformance continues to support the USD – DXY was +0.2% overnight to 98.63 with little in the near term to drag it lower. The Fed’s Bullard (voter, dove) advocated for taking out more insurance, while the Fed’s Dally (non-voter) argued “monetary policy can and should offset” headwinds from slower global growth, geopolitical risks and trade. More interesting remarks came from former-Fed official Dudley who noted Powell is starting to “push back” on Trump’s constant criticism (note Dudley argued earlier in September that “officials face a choice: enable the Trump administration to continue down a disastrous path of trade war escalation, or send a clear signal that if the administration does so, the president, not the Fed, will bear the risks”) – a possible flag that the Fed will be very measured in addressing headwinds from trade tensions.

US repo markets continue to be more settled with the Fed taking only $65.8b of overnight compared to the cap of $75bn – the first undersubscribed repo since September 17. The Fed’s Williams noted that money markets had calmed down, but the Fed would continue to assess the implications for reserves and for the Fed’s Balance sheet. In order to keep repo markets settled, the Fed’s Bullard also advocated for a standing repo facility – arguing that its mere existence would stabilise trading,.

US data overnight was sparse with only the US PMI of note.

The overall composite rose to 51.0 from 50.7 and plays to the view of the US continuing to outperform the rest of the world. However, the details also revealed the services sector is starting to feel the chill from the manufacturing sector with the Services PMI coming in at 50.9 against 51.4 expected and 50.7 prior. Markit noted that there firms cited a soft path of client demand attributed to “less favourable underlying economic conditions” with inflows of new business the weakest since 2009 and that some companies had cut back hiring on staff in September.

There was little news on US-China trade, though headlines at the margin were supportive. Treasury Secretary Mnuchin said a Chinese trade delegation’s visit to US farms has been rescheduled, while the initial cancellation of Chinese farm visits was done at the request of the US in order to avoid a media circus and the impression of China meddling in domestic politics. It was also reported overnight that Chinese importers purchased 10 cargoes of US soybeans on Monday – equivalent to around 600,000 tonnes. We are unlikely to hear much more on trade for the next week given China’s focus will increasingly be on the October 1 70th Anniversary of the founding of the Peoples Republic of China.

GBP was under pressure overnight, -0.3% to 1.2435. PM Johnson is due to discuss Brexit on the sidelines of the UN this week, while Labour’s Corbyn said that his party would hold a second referendum on Brexit if it wins the general election.

The AUD was little changed overnight, +0.1% to 0.6773. The main driver of the AUD coming up will likely be a speech by RBA Governor Lowe who is speaking in Armidale on “An economic update”. We think Lowe will provide a strong signal that the RBA is ready to cut rates again, endorsing our view for a 25bp cut in October. Any comments on the scope for unconventional policy will also be critical for the market. An October rate cut is already 82% (20.5bp) priced in. As my colleague Alex Stanley notes, there’s scope for the market to bring forward pricing for an additional move to 0.5% and for terminal pricing to edge lower (currently 0.47%). We remain long the front end.  A dovish RBA Governor and continued global rally could see 3yrs rally further towards the early August high of 99.41. 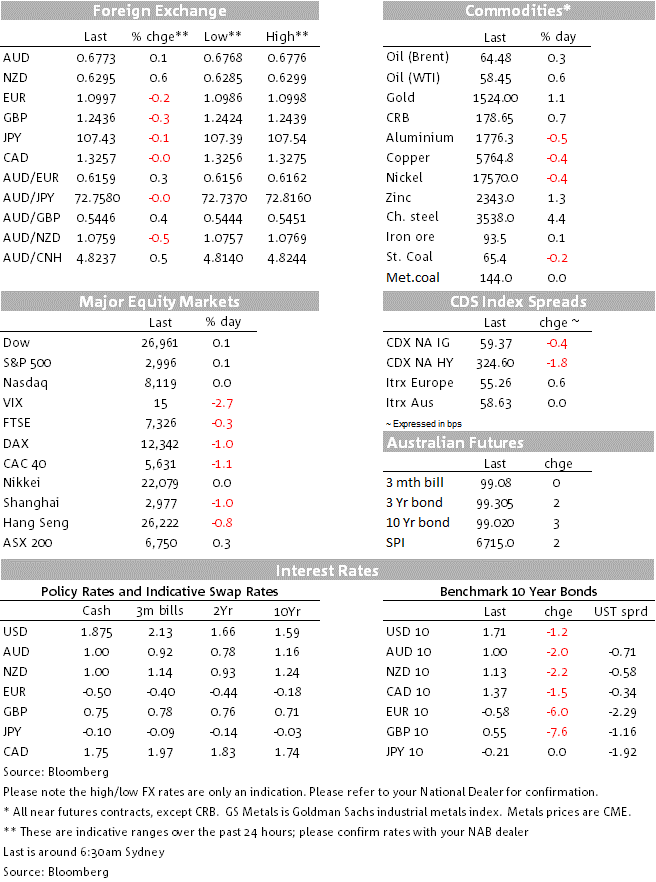