Taking finger limes to the world

Remember the Chinese gooseberry? Not so much. Not until it turned into the kiwifruit and began turning up in fruit salads everywhere. Meet the man introducing ancient Australian bush tucker to global foodies as ‘lime caviar’. When Ian Douglas, QC, bought a hobby farm three decades ago, he wasn’t planning on playing a pivotal role in creating what could become a major industry. But at 81, a decade after giving up his day job, he’s on the cusp of helping turn finger limes into the Next Big Thing in foodie circles.

Don’t feel embarrassed if you have no idea what finger limes are; neither did Ian and his wife Margie until shortly before they decided to start growing them.

“We’d originally planned to grow avocados but never did,” Ian explains. “In 2002, Margie read an interview with an American chef working at the Sydney Opera House’s restaurant. He said the best two things about Australia were the women and the finger limes.

“As it turned out, we already had a finger lime tree on our property. We’d bought it years previously from a nursery but at the time neither we nor the sales assistant knew what it was.”

As the name suggests, finger limes are digit-shaped fruits. Lurking underneath their unprepossessing skins are spheres packed with tangy fruit juice. This photogenic ‘lime caviar’, rich in Vitamin C, folate and antioxidants, can be used in many of the same contexts as other citrus fruits: garnishes for drinks, on salads and desserts, or in marmalades and pickles.

Indigenous Australians ate the fruit and it attracted some interest from early settlers. However, its virtues have only been introduced to large farming circles in recent years.

“There had long been a tiny cottage industry which supplied a handful of restaurants,” Ian says. “Then, in the early 2000s, finger limes started receiving some media attention. Four or five farm owners, including Margie and I, decided to try to grow them on a large scale.”

The Douglas family admit they were making it up as they went along and encountered numerous challenges in the early years.

“It was – and still is – difficult to source quality trees,” Ian says. “It took us two years to get to the point where we had 300 to 400 planted. Then we had to wait four years for them to fruit.” 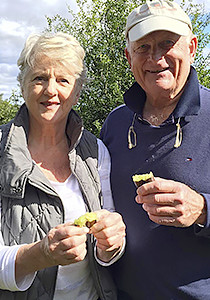 Fruit they eventually did but that just led to more issues. The biggest issue was that few knew what finger limes were.

“Margie made a lot of phone calls to chefs attempting to educate them,” Ian says. “Fortuitously, this was also around the time that social media marketing was taking off. Our daughter, Peta, was able to use it incredibly successfully to spread the word, not just locally but to people around the world.”

Ian and Margie, who named their business The Lime Caviar Company, also laboured to give what had been viewed as basic bush tucker a gourmet sheen.

“Look at what happened to kiwifruit when they changed the name from Chinese gooseberry,” Ian says. “The two pieces of advice I give to those looking to get into the industry are to buy their trees from a reputable supplier and to concentrate on marketing. Just growing good finger limes is not enough at this point; you also need to convince people to buy them.”

Finger lime farming not for the faint-hearted

Once the Douglas family had fired up the demand side of the equation, they ran into issues on the supply side. “There are a variety of finger limes you can grow,” Ian says. “The variety we initially sold didn’t travel well and ended up getting to buyers in a degraded state.”

After that problem was solved, Ian says he faced a disappointing relationship with a middleman. “Most growers were using agents or providores to get to market so we did too,” he explains. “But they were letting the finger limes sit in a warehouse for weeks, meaning they had a limited shelf life once they got to customers.”

Another hurdle was difficulties with customs. Unusually for a citrus fruit, finger limes don’t attract fruit flies. This, unfortunately, is not a fact universally recognised by food inspectors.

“We send fresh finger limes to the EU, Malaysia, Singapore and Hong Kong,” Ian says. “But we’re required to freeze them if we want to export to China, Japan, Korea, Thailand, New Zealand or the US. That involves four kilos of dry ice for every 10 kilos of product, which bumps up the freight costs and detracts from the flavour.”

Looking to Asia for growth

After a decade of lobbying, Ian is now hopeful the Australian government will soon start to work with its foreign counterparts to allow easier access to enormous markets such as China.

“A mature tree should produce, on average, 10 kilos of finger limes a year and we command close to $40 a kilo,” Ian says. “We’ve currently got 3,500 trees. With help from investors in Sydney and elsewhere, I hope to see a 20,000-tree venture launched sometime within the next two years.

“There are now several other farmers who grow and market finger limes as their primary source of income and the number is expanding. There’s increasing demand from all around the world.

“If the customs issues can be resolved, there’s no reason finger limes can’t provide a good living for many Australians and generate considerable export revenue.”

Purple is the new black: Why consumers can’t get enough of Bridestowe Estate lavender