Design failures: why Alessi has 60,000 fish hooks in its warehouse Stashed away at the Alessi warehouse in Crusinallo are tens of thousands of fish hooks – the result of a design project with Salvador Dali gone wrong.

“My grandfather Carlo stopped [my uncle] Alberto on this project because he was spending a lot of money but he didn’t stop it in time, because he’d already bought 60,000 hooks for salmon fishing that we still have in our warehouse,” recalled Luca Alessi, commercial director of Alessi in Asia-Pacific and the fourth generation of the family to work in the company.

It’s an example of how things don’t always go according to plan when companies are pushing at the limits of design.

Alessi is an Italian homewear design firm, but was asked to share insights into the process of design with the audience at the Business Forum, supported by NAB.

Luca Alessi explained the family has a “borderline theory” of design.

But Alessi said the line isn’t really visible. So mass production companies stay as far as possible from the line because it is too risky to invest a lot of money in a product that might not sell. “They bring to the market objects that are more and more similar and not innovative,” he said.

“Italian design companies like Alessi is to work as close as possible to this line so they bring innovation. Sometimes – many times unfortunately – we fall into the Non Possible,” he said. But the failures let the company learn where the line is and to keep trying for innovative designs.

Even the fish hooks have had their uses. “A few years ago we gave to every employee in Alessi one salmon hook as a sign that not all the flops are bad, because that artistic approach that we had then led the company to become the brand that it is today,” he said.

Why the Kooples does 12 collections a year 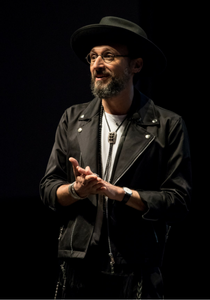 French label The Kooples was founded less than a decade ago by three brothers.

Its mixture of French chic and English quality tailoring has propelled the men’s and women’s fashion brand to rapid success. It was on a rapid growth path from the start, opening 22 stores in France in its first month and now sells EUR 230 million of stock a year In 36 countries.

Founders Alexandre Elicha and Nicholas Dreyfus said one of the reasons the label has grown so quickly is because it launches so many collections each year.

Rather than just doing four seasonal collections a year, the Kooples launches a new collection every month.

“The idea is to create desire, to capture new clients and to bring them to the store all the time,” Elicha explained.

Dreyfus adds: “They know that if they don’t come this month to buy this suit or this dress it will disappear.”

“With the 12 collections the main thing is to seduce.”

Each monthly collection is accompanied by a full marketing plan – including training staff on the new collection, press releases, a social media campaign and visual merchandising for windows and stores.

They learned the value of planning and preparation the hard way.

A few years ago the company launched a range of watches after putting a lot of effort into design and details like the strap.

How Zegna is responding to new customers

Family-owned Ermenegildo Zegna has made classic and timeless fabrics and suits for over a century.

Although its designs don’t change much from year to year (in fact, chairman Paulo Zegna’s said one of the company’s past mistakes was trying to be too “fashion-oriented”) the company does try to keep up with changing customer demands.

“Customers today can distinguish and look beyond what I call ‘the window effect’,” Zegna said. “They go beyond the aesthetic. They want to know what’s behind a product, where it comes from, who made it, why he made it in one way or in another.”

It’s one of the reasons the company invested in the Achill sheep farm in NSW to produce its own wool and to become the only company covers the entire production cycle of suit making – from growing the wool to owning retail stores. And it is why it takes such care of the environment and animal welfare.

“It allows us to really give the guarantee that every single stage in the full chain is covered by us,” Zegna said.

The changing world of imports: A view from the inside

Our data show a drop in retail sales in May, albeit from generally strong levels seen earlier in the year.