Insights from Dr Ben Bernanke from the World Business Forum

Dr Ben Bernanke, former Chairman of the US Federal Reserve, discussed his experience of the global financial crisis (GFC), his views on global growth, the stability of the financial system and where critical economies like China are heading. 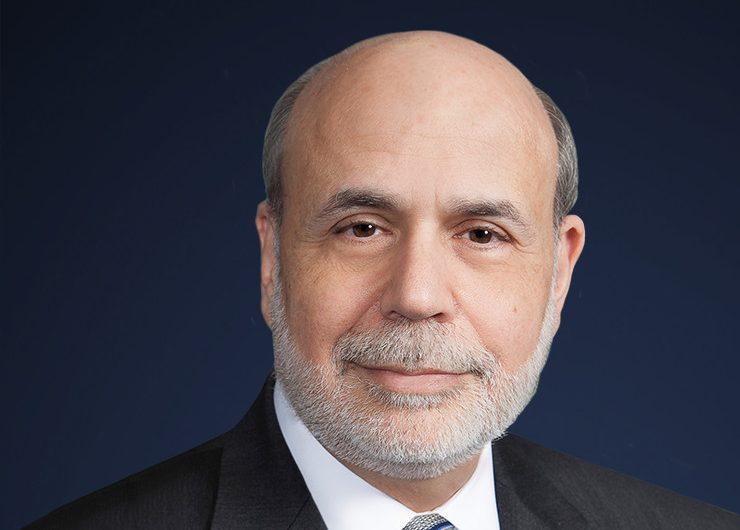 In conversation with Alan Oster, Group Chief Economist at NAB, and Michael Stutchbury, Editor in Chief of the Australian Financial Review, Dr Ben Bernanke, former Chairman of the US Federal Reserve, discussed his experience of the global financial crisis (GFC), his views on global growth, the stability of the financial system and where critical economies like China are heading.

The failure of Lehman was not a policy choice.

The Lehman weekend was a turning point in two ways: at that point the US economy and the financial system was exposed to serious financial panic and a strong preference for cash. After Lehman failed the panic escalated to a level more intense than anything I’ve seen in the US or around the world. The financial system was on the brink of sharp contraction of credit and availability of funding.

On the other hand, Lehman was a positive turning point. After that were able to go to Congress and ask for the necessary assistance that would help us stop the crisis.

The failure of Lehman was not a policy choice – it was the opposite. The general consensus at that time was that it was time to let a company fail and let market discipline work. We didn’t buy that. I believe in market discipline but in the midst of an intense crisis we knew a collapse would have tremendously negative effects on the broader system. Wetried to find a solution and brought several potential buyers together. But the firm was in the red and no one wanted to buy it. Unfortunately, because Lehman did not have enough collateral to secure the loans it needed, we had no tools to save it.

We need risk taking or we can’t create new industries or products.

Sometimes it goes bad, so there will always be upsets in the financial system. The trick is to make sure the system is sufficiently strong that even if it’s shocked it stays stable.

Within the business cycle there are fluctuations – some are associated with financial crises and some aren’t. We hope to continue to improve on our ability to respond. If the financial system can be made strong enough we have the tools to address garden-variety recessions.

The strongest recoveries have happened where there has been significant monetary policy expansion.

In advanced industrial economies, the US and UK were the most aggressive. Those are the two strongest recoveries. Europe only began the process this year and is the weakest. Japan is in the middle and is much more aggressive but they started more recently. So I am confident it has been effective.

The financial system is much stronger.

I don’t see pricing or risk build ups that threaten the stability and integrity of the system right now. There are examples of excessive risk taking and the best approach is to monitor it closely. Australia and the UK are good at using various prudential policies to address concerns. But I don’t see anything that looks like the tech stock bubble.

The question is not where asset prices should be. That is an investor issue. From a central bank point of view the issue is whether the system itself is at risk if stock markets fall, say 10%. Probably not because our banks and other key financial institutions are not that exposed to stock prices and the system is much stronger.

We can say the financial system is much more stable than it was. Supervision and oversight is better and there’s not much to indicate at this point that there are major risks to the stability of the system. Central bankers should strive to be boring. I’m hoping for a lot of boredom going forward. I’m hopeful we avoid big shocks. Boring is excellent. What I put aside is geopolitical shocks that could have major implications on the world economy.

Countries need to be able to use monetary policy to achieve their domestic objectives.

When asked about the impact of US monetary policy on the Australian dollar – that is, keeping it higher than commodity prices justify, Bernanke says that the US and Japan are setting monetary policy at a level to achieve domestic inflation objectives. In a floating exchange rate system a side effect is that the currencies of countries fall as a mechanism through which the monetary policy works. From the point of view of trading partners they are seeing a lower USD but they are seeing a stronger US market and a stronger global market – they partially offset each other.

Some slowing in China is inevitable but a hard landing is unlikely.

A slowing is both inevitable and desirable.China can no longer grow based on the traditional model of exports, heavy industry and construction – it has to change to a model based on domestic consumer spending, services and technology. As China becomes richer and more sophisticated and makes the transition it will grow more slowly but 6-7% is still remarkably high.

There are risks in the system – Chinese banks have expanded their credit and many loans are not very good, but I presume China will use its fiscal resources to do what needs to be done to keep the system safe. I don’t think a hard landing is probable.

Growth rates will be slower in industrial countries…but productivity makes it unpredictable.

Several factors will make growth slower in advanced industrial economies. Labour force demographics are a key issue. As populations get older boomers retire, and fewer workers means slower growth. This is even more extreme in Japan than in the US; in Japan the labour force is shrinking.

The big unknown is productivity growth. I am more optimistic than some. During and after the GFC credit markets were frozen so there was no money for start-ups and R&D and no venture capital. That has been changing. Productivity has been poor but it should get better.