Overview Soak Up The Sun

“Maybe something’s wrong with you; That makes you act the way you do; I’m, I’m gonna soak up the sun; I’m gonna tell everyone to lighten up”, Sheryl Crow 2002

A positive day for risk sentiment ahead of US Payrolls tonight on no new news. Equities are up with the S&P500 +1.8%, the USD is on the backfoot with DXY -0.7%, and commodity prices are generally higher. Yields in contrast are broadly steady with the US 10yr +0.2bps to 2.91%. The only possible driver your scribe could find is the ‘bad news is good news’ story given a weak ADP payrolls report, but importantly the other side of that equation being a  mooted Fed September pause is now less likely with Fed Vice Chair Brainard stating “it’s very hard to see the case for a pause”. That comment didn’t seem to weigh too heavily on markets, but certainly plays against the notion of a near-term pause.

Instead, the question for the Fed is really about the pace after July rather than pausing. Fed vice-Chair Brainard noted: “right now it’s very hard to see the case for a pause” and there is “a lot of work to do” to get inflation down. Brainard is supportive of two further 50bp increases at the June and July meetings, and thereafter another 50bp might be called for “if we don’t see the kind of deceleration in monthly prints ”. Brainard also repeated the Fed’s new mantra of “we’re certainly going to do what is necessary to bring inflation back down”. (see CNBC: Fed Vice Chair Lael Brainard says it’s ‘very hard to see the case’ for the Fed pausing rate hikes). The Fed’s Mester made similar comments, noting: “If by the September FOMC meeting, the monthly readings on inflation provide compelling evidence that inflation is moving down, then the pace of rate increases could slow”.

Ahead of payrolls tonight, ADP disappointed at 128k vs. 300k expected, along with a 45k downward revision to April . The detail of the release noted smaller firms (with less than 50 employees) had actually shed 91k jobs. Under a backdrop of a tight labor market and elevated inflation, monthly job gains are getting closer to pre-pandemic trends, while it appears small businesses are struggling to keep workers given the competition for workers. Meanwhile other data in the US was broadly inline with Jobless Claims at 200k against 210k expected.

Oil prices are up despite plans to increase supply with Brent +1.6% to $118. Yesterday the FT reported that Saudi Arabia has indicated to western allies that it is prepared to raise oil production should Russia’s output fall. Overnight, the outcome of the OPEC+ meeting was an uplift to the supply plan, with production set to lift by 648k barrels per day for July and August, larger than the previously scheduled 400k, a sign that Saudi Arabia has finally relented to pressure from the US to increase production. Some doubt that OPEC+ can deliver on the production increase and US crude stockpiles fell more than 5m barrels last week according to the EIA.

Broader commodity prices were also higher with copper prices are up over 5%, the most in two years, fuelled by optimism that the easing of lockdown restrictions in China will unleash demand, although that doesn’t seem a satisfactory explanation for the one-day move as the reopening of Shanghai has been well telegraphed. Broad-based strength in commodity prices is also partly due to a much weaker USD with the DXY -0.7%. The EUR, GBP, and CAD are all up about 0.8% overnight, while the gain for the AUD and NZD has been in the order of 1.4% and 1.2% respectively. The extent of the moves is somewhat surprising, though mostly reverses the USD strength we saw the previous day after the stronger than expected ISM figures.

The elevated US dollar is also starting to impact the US economy with Microsoft downgrading its earnings outlook on account of USD strength affecting its overseas earnings. The USD DXY has risen roughly 13% over the past year. Other US companies with offshore earnings are reporting similar themes. The S&P 500 Foreign Revenue Exposure Index has dropped around 17% so far this year, compared with the broad S&P 500 index’s 13% decline. Meanwhile, the S&P 500 U.S. Revenue Exposure Index, which includes companies more dependent on domestic sales, has lost just 7% (see WSJ: How a Strong Dollar Hits Microsoft, Other Big U.S. Companies). 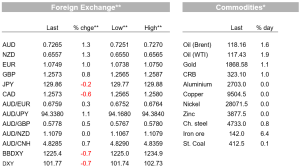 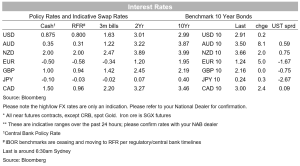