Rise in oil prices fuels inflationary concerns and the need for central banks to increase their hawkishness.

Overview The price you pay

US equities reversed gains from the previous day while European equities extended their recent decline. Rise in oil prices fuels inflationary concerns and need for central banks to increase their hawkishness. The OECD joins the downbeat chorus on the global economic outlook noting the “The world is set to pay a hefty price for Russia’s war against Ukraine”.  Core global bond yields have shifted higher with European sovereign yield leading the move while a soft 10y auction didn’t help US Treasuries. 10y UST move back above 3%, helping extend the recent move up in USD/JPY, now above ¥134, a new 20 year high. AUD starts the new day at 0.7192

Equity markets have continued their up and down trading pattern that began late in May, unable to establish a new up or down trend. Investors continue to be buffeted by differing news on the global outlook with the narrative overnight playing to inflationary concerns and lower growth.

Oil prices have accelerated their recent uptrend with both Brent and WTI up over 2% in the past 24 hours. Brent oil is up for the eight day in the past 10 and now trades just above $124, up $10 in the past fortnight. After some indication of a likely ease in inflationary pressures, the renewed uptick in oil and energy prices is stoking concerns central banks will be forced to increase their hawkishness. The move up in oil prices overnight was initially instigated by comments from the UAE Energy Minister suggesting that prices are far from peaking because Chinese demand hasn’t fully returned from the impact of the pandemic and ongoing under-investment in the industry. The minister also said that the UAE was in talks with Germany and other nations to export more gas, which offered some fleeting support to the EUR as the region looks to ways to wean itself off Russian energy. Ahead of the ECB tonight, the EUR approached 1.075 before easing back (now at 1.0117).

Later in the overnight session, oil prices got an additional boost on the back an EIA report showing crude inventories at the US’s biggest storage hub at Cushing fell 1.59m barrels last week. Then we also had comments from OPEC’s Secretary General, Mohammad Barkindo, noting that ‘with the exception of 2-3 members, all are maxed out’ on oil production and ‘The world needs to come to terms with this brutal fact’.

Stagflationary concerns were not helped by the latest economic outlook by the OECD. The organisation slashed the global growth outlook to 3% from the 4.5% estimated in December. The OECD also doubled its forecast for inflation among its members (which include the US, Australia, Japan, and Latin American and European nations) to 8.5%, its highest level since 1988 .  In a downbeat assessment to the global economic outlook, the OECD’s chief economist and deputy secretary-general, Laurence Boone wrote “The extent to which growth will be lower and inflation higher will depend on how the (Russia- Ukraine) war evolves, but it is clear the poorest will be hit hardest,”.

Looking at equities’ overnight performance, there was an initial optimism in the air following encouraging developments from Asia after new video game approvals encouraged the view that China is loosening a crackdown on tech firms, the Shanghai 300 index closed up 1% yesterday. In the end, concerns over the inflation and growth outlook overwhelmed sentiment with the Euro Stoxx 600 index closing 0.57% lower while in the US, the S&P 500 closed over 1% lower while the NASDAQ ended down by 0.73%. Unsurprisingly, energy was the only sector that managed to record gains on the day (up 0.15%) while all other 10 sectors in the S&P 500 ended the day in the red, materials and real estate down 2.10 and 2.43% respectively. Chipmakers were also under pressure after Intel said the current quarter wasn’t going as well as expected. Downward revision to forward earnings/revenues is becoming a theme, Intel fell more than 5% and the Philadelphia Semiconductor Index lost almost 2.5%.

The move up in oil prices didn’t help sentiment in the rates markets. Ahead of the ECB meeting tonight, European yields came under renewed upward pressure with yesterday’s decline in yields proving to be an anomaly rather that the start of a new trend. 10y Bunds now trade at 134.9%, up 6.1bps in the past 24 hours and up for the 7th day in the past eight. UST yields also moved higher in an almost parallel fashion with 10y UST yields up 5bps to 3.2089%. A soft UST auction didn’t help the mood with the $33bn 10y Note awarded at 3.030% vs 3.018% yield bidding deadline, the highest 10-year auction stop since November 2018.

Moving onto FX, the USD regained it mojo over the past 24 hours mildly performing against most currencies. The euro was the one exception, holding its own ahead of the ECB tonight while on the other end of the table, JPY was the big underperformer. The move up in UST yields plus recent BoJ comments reaffirming the Bank’s ultra-easy monetary policy has been the perfect combo for USD/JPY, the pair accelerated its recent ascendency and now trades at a new 20 year high of ¥134.23 with technical picture suggesting it still has more room to trade higher.

The AUD has remained rangebound trading around the 72c mark and now opens the new day at 0.7192. Inflationary concerns and the RBA need to speed up its expected rate hiking path has been a big theme  domesticall, Secretary to the Treasury Steven Kennedy yesterday noted Australian inflation is likely to breach 6% and potentially could go “well above” that level. Also yesterday, speaking to James Glynn, RBA board member Harper said “It’s clear that inflation is getting a grip” and but after Tuesday bigger than expected rate hike, Harper said. “We don’t want to give anybody the impression that this is going to get away from us.”

Against this backdrop and newly revealed RBA preference to quickly normalise policy – along with expected high inflation prints in Q2 and Q3 – NAB has revised up its cash rate profile. NAB expects additional 50bp hikes in July and August to take the cash rate to 1.85%, with a further 25bp November rise to 2.10% by year end. NAB sees the pace of hikes slowing in 2023, with two 25bp increases, taking the cash rate to 2.60%. 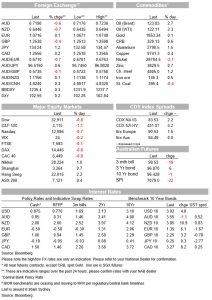