Markets Today: The day before the dots

Ahead of tomorrow’s FOMC meeting we have seen an increase in market volatility across Equity, Rates and FX.

Overview The Day Before You Came

Ahead of the FOMC meeting tomorrow, we have seen an increase in market volatility across Equity, rates and FX. A late rebound in tech stocks helped the NASDAQ close in positive territory, but it was not enough to prevent the S&P ending the day in the red. US Treasuries extend their sell-off amid expectations for a 0.75% Fed funds hike early tomorrow morning while 2y Gilts bucked the higher global rates trend. The USD remains in the ascendency with GBP and NOK the major underperformers over the past 24 hours. Last night Governor Lowe warned Australians to prepare for higher rates while the AUD lost more altitude overnight, starting the new day at 0.6871

The market is now fully pricing a 0.75% Fed funds rate hike with seemingly well sourced media articles guiding the move up in front end yields over the past 24 hours. Late Monday, both WSJ’s Nick Timiraos and CNBC’s Steve Liesman reported that the Fed will be considering a 75- point Fed Funds rate rise this week, and Liesman reckons they will deliver it. Timiraos’ report is interesting in so far as it came just 9 hours after continuing to an article saying the Fed was likely to go 50bps this week.  Timiraos writes “A string of troubling inflation reports in recent days is likely to lead Federal Reserve officials to consider surprising markets with a larger-than-expected 0.75-percentage-point interest-rate increase at their meeting this week”.  Meanwhile, ” Liesman said. “I know that Powell said the committee back in May was not actively considering it, but he also said that they were looking at the economy, and I think the economy has changed to the point in my reporting, such at this point, I’d be dialling in to 75 if I were a betting man at this point, not at 50.“ .

A 100bps rate hike has also been mooted by some market participants to stamp the rise in US inflation with JPM chief economist, Michael Feroli, arguing such a call was not trivial. The market now prices a Fed fund rate hike of 0.75% by tomorrow moving another -74bps by the end of July and 61bps in September, taking the funds rate to 2.916% by September 21. That said by bring forward these rate hikes, the market is now also pricing a rate cut by the end of 2023 and 50bps rate cuts in Q1 2024.

10y UST yields rose as much as 11bps to an 11-year high of 3.47% while the two-year yields hit 3.44%, a level last seen in 2007. The US PPI May report released overnight did little to dampen US inflationary concerns, PPI final demand increased 0.8% from April and 10.8% from a year earlier. Meanwhile, the May NFIB index of small business activity and sentiment dipped trivially to 93.1 from 93.2, very close to the consensus, 93.0.

The move in yields has not been limited to UST with core European yields also edging higher, although notably 2y Gilts bucked the trend, easing 1.5bps to 2.080%. The BoE also meets this week with the market pricing 50% chance the Bank will lift the cash rate by 50bps. NAB reckons the BoE will stick with a 25bps hike with guidance leaning increasingly towards a pause, see our preview here. Germany’s 10-year rate rose 12bps to 1.74% while, for a change, peripheral spreads to Germany have been relatively steady. ECB GC member Schnabel said “how we ultimately react to risks of fragmentation will firmly depend on the situation we are facing”, signalling that a new crisis tool is unlikely to be presented until it is considered necessary.

Sticking with the UK, overnight the April labour market report was a mixed bag, with strong payrolls figures but an unexpected lift in the unemployment rate to 3.8%.   Average earnings ex bonuses rose a healthy 4.2% y/y but plunged by 3.4% y/y when measured in real terms, the worst in two decades. The latter favours the BoE view that the real incomes squeeze will be ‘the cure’ in bringing inflation down.

Moving onto FX, the USD has remained in the ascendency, stronger in index terms and gaining ground against most G10 pairs. The DXY index is trading at a fresh 20-year high of 105.492 while in G10 NOK and GBP are the big underperformers, down 1.19% and 1.15% respectively. NOK’s underperformance was not helped by a decline in oil prices ( Brent -1.17%, WTI -1.85%), following comments from Bharat Ramamurti, deputy director of the National Economic Council. Speaking to Bloomberg Television, Ramamurti said “There’s a real issue here with the level of production by the oil companies and the profits that they are making,”. Democratic Senator Ron Wyden is planning on proposing as much as 42% federal taxes on companies that record a profit margin better than 10%, according to people briefed on the proposal.

Cable’s decline sub 1.20 is not just explained by the lag in UK Gilts yield’s rise, concerns over the government intentions to override parts of Brexit deal are also a headwind for the currency. The EU is expected to respond in more detail to the UK bill proposal on Wednesday.

The AUD has extended its steady decline over recent days and starts the new day at 0.6871, 20 bps higher from its overnight low. Speaking on the 7:30 ABC programme last night, Governor Lowe sounded a bit more hawkish warning Australia needs to prepare for higher rates. The Governor stressed that the RBA “will do what’s necessary” to bring inflation back down to its 2-3% target, noting that Inflation could accelerate to as much as 7% by year’s end and is unlikely to begin slowing until the first quarter of 2023 . Repeating recent remarks, the Governor added that that it would be “reasonable” to expect the cash rate to climb to 2.5% at some point. “How fast we get to 2.5%, indeed whether we get to 2.5%, is going to be determined by events.”

Yesterday the BoJ ramped up its bond buying activity in order to keep yields suppressed and even bought longer dated 30-year JGBs are they were showing signs of dislocation . The central bank bought 2.2 trillion yen (USD16.3b) of bonds in the operation, a record amount of bond purchasing in a single day, underlying the BoJ’s commitment, for now, in maintaining its aggressive policy stance. This policy continues to undermine the yen and USD/JPY has been hovering close to the 135 mark. 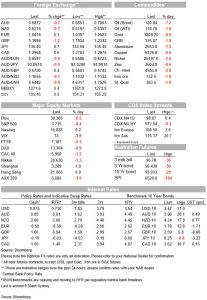 Brent oil prices are down 17% since 14 June and have the potential to drive some welcome relief on headline inflation prints.

AMW: How will central banks respond to recession risks?