MT: Gas will trickle, Draghi will go, ECB will hike

Draghi’s government looks set to fall after three key parties failed to support him in a confidence vote which could complicate the ECB plans to deliver details on its new anti-fragmentation tool.

US equities added to yesterday’s gains although with some caution after Google warned it was reviewing its headcount (after the bell Tesla shares jumped following earnings beat). In contrast, European shares retreated with Italian equities leading the decline, Draghi’s coalition government looks set to fall, potentially sending Italy into months of political uncertainty, complicating ECB plans on its fragmentation tool. Putin says Nord Stream will restart, but at curtailed capacity, limited supply still forces EU to plan for gas consumption cuts. After a volatile session 10y UST end the day 1bps higher at 3.03% while ahead of the ECB Italian 10y BTPS sell off and the euro trades lower, dragging other EU pairs lower. AUD starts the new day sub 69c.

It has been a night of mixed fortunes for US and European equities. The S&P 500 recorded back-to-back gains for the first time in almost two weeks, closing the day 0.59% higher while the NASDAQ gained 1.58%. Tech and consumer discretionary sectors advanced with Netflix’s result, (after the bell yesterday), which were better than feared, supporting the notion the US consumer remain resilience. Before the close, shares retreated from overnight highs after Google said a two-week pause in hiring was needed to allow the company to review headcount needs and “align on a new set of prioritized Staffing Requests for the next three months.”. This follows layoffs or hiring slowdowns at other big tech firms including Tesla and Apple as companies brace for a possible recession. Ford said it plans to cut as many as 8,000 jobs in the coming weeks. After the bell Tesla shares jumped on better than expected earnings ( 2Q adj. eps $2.27, est. $1.83)  reflecting progress in getting production back on track. Alcoa also gained on better-than-anticipated earnings.

In contrast, ahead of the ECB meeting tonight, European shares retreated with Italian equities leading the decline. The Stoxx 600 index closed 0.2% lower while Italy’s FTSE MIB fell 1.60%, Draghi’s government looks set to fall after three key parties failed to support him in a confidence vote. Amid rising economic uncertainty, Draghi won a confidence vote late on Wednesday (95 senators voting in favour, and 28 against), but the result had little significance as the center-right League and Forza Italia, as well as the Five Star Movement, did not take part. The premier insisted that without broad support he couldn’t govern and implement the much-needed reform. A collapse of the coalition government would send Italy into months of political uncertainty with a new election coming sometime during the fall. Italy’s political uncertainty complicates the ECB plans to deliver details on its new anti-fragmentation tool, especially regarding the conditions for the tool to be triggered. In theory the tool should be triggered when peripheral bonds come under unwarranted pressure, but if they sell-off because of irresponsible or unruly governments, arguments for the ECB to intervene become less justified. A big sell off in Italian bonds could be destabilising for the Union, but ECB intervention in this scenario could be regarded supporting irresponsible governments.
Italian bond yields rose during the European session closing 6bps higher at 3.374%, and the 10y BTPS-Bunds spread closed at around 213bps. But after the Italian the news transpired after the close futures indicate the spread has now jumped closer to 230bps, near recent multi-year highs.  Likewise, futures on Italy’s equity market are off more than 4%.   After a strong run over the past few days, the political uncertainty has seen the EUR come under pressure overnight, down 0.5% to back below 1.02. Meanwhile, in the US, after volatile session, 10y UST yields ended the day 1bps higher at 3.265, although this was after they traded down to an intraday low of 2.941%.
Sticking with Europe, late yesterday Russia President Putin said that Nord Stream gas flows would restart this week (good news!!) but the flow could be as low as 20% capacity (not so good after all!). Gazprom has blamed technical issues around a broken turbine for the restricted gas flows, but most suspect Putin wants to keep the pressure on Europe, by not providing enough supply for countries to refill storage facilities ahead of winter. If Putin delivers, this would avoid the worst-case scenario of a complete cut-off and imminent EU recession, but still leaves Europe in very difficult position. The expected 20% supply might be enough to meet short term demand, but won’t allow Europe to build up stocks for winter and of course it also leaves the Union at the mercy of Putin’s next move. LNG gas prices in the Ducth Hub ended the day a little bit higher ( +0.4% ), but still at very elevated levels of €155.38.

EU President Ursula von der Leyen, meanwhile, said a full cutoff of gas is a “likely scenario.” The European Union proposed that the bloc cut its natural gas consumption by 15% over the next eight months. Germany is at risk of losing 4.8% of economic output if Russia shuts down supplies of natural gas to the country, the International Monetary Fund warned.

Looking at FX in more detail, the move lower in the euro weighed on other EU currencies with NOK and SEK giving back some of yesterday’s gains, down around 0.5% while NZD and AUD showed some resilience, aided by the rebound in US equity sentiment . The kiwi actually managed to eke out small gains against the USD, up 0.08% to 0.6239 while the AUD ease 0.14% relative to levels this time yesterday. Looking at the intraday chart the aussie traded down to a low of 0.6873 early this morning and now it starts the new day at 0.6887.

On economic news, UK headline inflation continued to rise, hitting 9.4% in June, slightly higher than expected.  The Bank of England expects headline inflation to reach 11% later this year after energy companies increase prices.  There wasn’t much reaction in either the GBP or UK rates, with the inflation numbers coming close to expectations and investors more focused on developments in Europe over the next 48 hours. The GBP is down around 0.2%, to 1.1970, overnight.

Meanwhile, bucking the trend of upside global inflation surprises, Canada’s headline CPI came in much lower than expected, at 8.1% y/y (8.4% exp.), still its highest level in almost 40 years.  The average of the Bank of Canada’s three core inflation measures pushed up to 5% y/y, close to market expectations.  The market reaction was short lived, with an initial fall in Canadian short-term rates quickly reversed and the CAD recovering most of its initial sell-off, now little changed on the day.

US existing home sales surprised to the downside and falling 5.4% to a 5.12m in June. This was the fifth consecutive month of decline which are now down 14.2% over the past year with expectation for further decline over coming months amid an increase in supply and elevated mortgage rates.
Coming Up 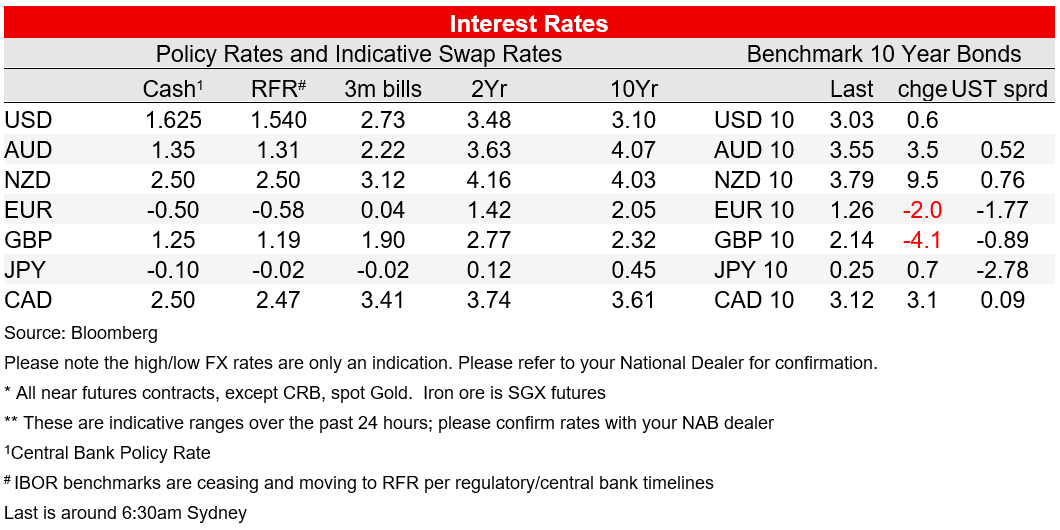