Markets Today: Markets out of steam on inflation day

Risk sentiment takes a turn for the worse with the first S&P down day in nine.

US stocks are having their first bad hair day after 8 consecutive up-days, the S&P coming into the last hour of NYSE trade -0.5% and the NASDAQ -0.7%. Bond yields have exhibited more bull flattening pressure, but with the earlier 6+ bps fall in 10-year Treasures checked by a less-than-stellar 10-year bond auction, while currencies are behaving in  fashion consistent with a risk-off market tone, with CHF and JPY both 0.3% firmer and AUD and NZD +/- 0.5% weaker. US CPI is today’s main attraction.

There are a few distinct moving parts to Tuesday’s aggregate decline in US stocks. Prices were lower out of the gate and have struggled to go better since then, with defensives doing better but financials down 1% and IT -0.6%, the latter led by Tesla (-8% in the morning, -11% now) following a ‘yes’ majority response to Elon Musk’s tweet asking whether he should sell-down 10% of his holdings and pay some capital gains tax as a result. Bank losses are consistent with the latest (bull) flattening in the US yield curve, where 10s are off 6bp and 2s down 3bp. 10s are though up a basis or point so from their lows, after the 10-year Treasury auction cleared more than 1bp above its pre-action level and the bid-cover ratio of 2.35x was the lowest since November 2020.

One factor that may have driven early-day weakness – Tesla aside – was the Fed’s latest Financial Stability Report (FSR) published after Monday’s market close so the first opportunity US investors had to respond. This warned of elevated asset prices and their susceptibility (read: “perilous lunges for risky assets”) to any weakening in the US economy, as well as contagion risk from the travails of China’s property sector (plus too, from stablecoins, though not other crypto-currencies). In short, a sense from the Fed that asset pics are currently priced for perfection.  There were shades of former Fed chair Alan Greenspan’s famous December 1996 ‘irrational exuberance’ remarks here, though let’s remember the US stock market didn’t peak until 18 months after he made those comments.

Also weighing on the financial sector – beyond the further flattening of the US yield curve with its negative connotation for bank earnings – was the report that Fed Governor Brainard had been interviewed by President Biden for the Fed chair job – as well as incumbent Jay Powell – with Politico reporting that Biden planned to make a decision by Thanksgiving (November 25). The hot money is still on Powell being re-appointed, but in which case Brainard seems certain to get the role of supervisor of the financial system, in which respect she has in the past been critical of what she regards as a too- lenient Fed attitude toward banking supervision and regulation. From a monetary policy perspective, whether it’s a reappointed Powell or Brainard in the chair shouldn’t  make a whole heap of difference – they are equally dovish in our view and both mandate-constrained, but the prospect of a tougher regulatory environment for banks (and which could still occur if Brainard gets the chair’s role) is reason  for investors to be worries about what that could mean for banks.

US data releases overnight included PPI, coming in exactly as expected in annual terms (unchanged at 8.6% for headline and 6.8% ex-food and energy) while the NFIB survey was weaker than expected at 98.2 down from 99.1 and 99.5 expected, with no sign that falling covid case numbers in the US have as yet had any positive influence on small business optimism.  The slippage was driven by the expectations component reflecting  businesses view on the economy, their own sales and profits. Difficulty in hiring labour is again mentioned and partly because of this, firms’ capex plans are rising and the one positive element of the report. In Europe, the German ZEW survey showed a bigger than expected fall in Current Conditions to 12.5 from 21.6, but expectations up to 25.9 from 21.0.

In FX markets, AUD and NZD have both lost ground overnight, in moves consistent rising worries about China’s slowdown and the earnings contained in the Fed’s FSR as well as the broader risk tone. Strength in the JPY (+0.4%) and CHF (+0.3%) have hed down the USD where the DXY is currently -0.1%. JPY strength , explicable in terms of lower US yields and weaker stock, including the Nikkei yesterday, has been a standout feature of G10 in the past week (+1%) with gains accelerating following the break below Y113.25 yesterday – the bottom of the range that has prevailed since mid-October.

Latest AUD slippage come despite yesterday’s NAB Business survey showing Business Conditions up 6pts to +11 and Confidence up 11 points to +21, alongside the reopening of NSW and Victoria. NSW drove the gains in conditions, coming out of lockdown earlier in the month. Business conditions improved across trading conditions, employment, and profitability. Looking forward, confidence bounced further out of lockdown lows to return to strongly positive territory. The gain in confidence in October was led by Victoria in anticipation of easing restrictions in the state from late October. On the prices side, retail prices slowed a little in October relative to the very strong reads of recent months, but upstream, the purchase costs series was very strong at 2.7%, to its highest since 2008. 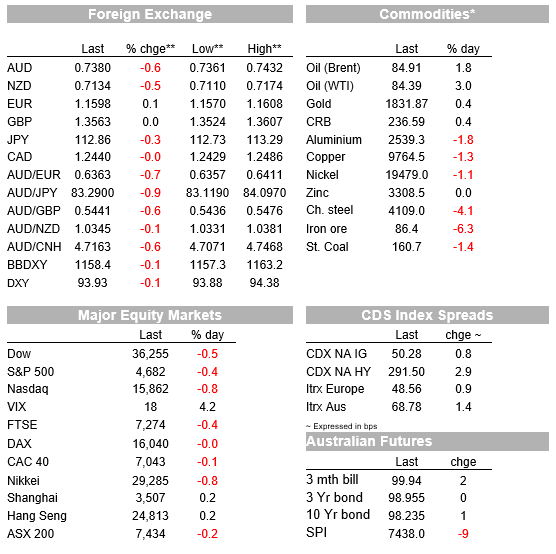 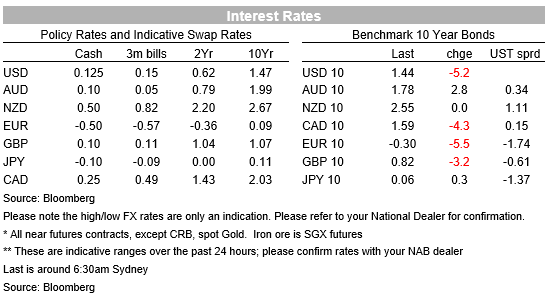