Overview Don’t Stop ‘Til You Get Enough

Keep on with the force don’t stop, Don’t stop ’til you get enough – Michael Jackson

US Q2 GDP was the data release to watch overnight and while the print missed expectations, a healthier US consumer that seemingly can’t get enough was the bright spot and carried the day. Equities liked the US consumer spending voracity while sentiment has also been helped by the perception the Fed is no rush to taper. The UST curve bear steepened driven by higher break evens  and corporate issuance while the USD is broadly weaker. NZD is at the top of the leader board, now above 70c while AUD has lagged and continues to flirt with a move above 74c.

The US economy expanded at a 6.5% rate in Q2, well below the consensus, 8.4%. Consumer spending ( 11.8% in the quarter) and business fixed investment spending (equipment 13% in Q2)  where the positive drivers during the quarter while net exports (as expected, -0.4% GDP detraction) and inventories (not expected, -1.1% GDP detraction) were the detractors during the quarter . The inventory decline came from a reduction in stocks due to strong demand against a backdrop of supply bottle necks.

Overall, the miss in the US GDP print was deemed to be not as bad as the headline might suggest. The US economy expanded at still an extraordinary pace, the cash up consumer has come to the party spending big as the economy reopens, while the big downward surprise from inventories is expected to turn into a tailwind over coming quarters. Another positive note was the fact that now the US economy is 0.8% above pre Covid levels

In other economic data, initial jobless claims were higher than expected, although seasonal adjustment issues appear to be distorting this data at present, while European economic confidence hit a record high in July.

After an initial downward blip on the US GDP release, US equity futures reversed course as the details revealed one of the biggest gains in consumer spending in more than half a century. Ignoring the incredible Q1-21 personal consumption print of 41.4%, the Q2 gain of 11.8% was the highest since the 14.1% print in Q4-1952. Sentiment over the past 24 hours or so has also been supported by the post FOMC assessment that the Fed is unlikely to taper any time soon while rate hikes are still a long way off. A Jackson Hole, even 22 September taper announcement now look unlikely given the Fed’s statement that it wishes to assess more data at ‘upcoming meetings’ (plural). An early 2022 actual taper though still seen as the consensus view. Importantly too and as noted by my colleague Gavin Friend, as time goes on and as the Fed remains confident higher inflation will drop back, Fed Cahir Powell is given airtime to talk about the foggy concept of maximum employment. Each time he does it seems like he manages to persuade a few more of his desires to take time in getting as many back into the labour force as possible as long as inflation remains no threat.

US equities indices jumped at the open and comfortably retained the initial gains at the close. The S&P 500 closed 0.42% higher, led by cyclical sectors, the Dow was +0.44% and the NASDAQ gained 0.11%. Earlier in the session, European equity indices also   closed with gains across the board with the Stoxx600 index up 0.46%.

Yesterday’s rebound in Chinese equities after the recent regulatory induced sell-off provided a positive lead to the solid performance in risk asset overnight.   Yesterday’s news of a video conference between Chinese regulators and global banks and investors, reportedly to address concerns that other industries would be targeted, has seemingly helped lift market sentiment. This has been followed by a front-page editorial in the Economic Daily, amongst other state media commentary, stressing the recent crackdown was not aimed at restricting the development of certain industries.

The Chinese CSI300 index rose 1.9% yesterday, after it had fallen almost 7% earlier in the week.  That said, overnight price action suggest many investors remain cautious with US listed Chinese stocks resuming their decline on Thursday. Speculation of Didi intentions to go private lifted US listed Chinese shares, but that move has been partially reversed after Didi denied the news, posting on its official Weibo account that it would not be taking itself private.

The US 10-year rate has bounced back from its fall after yesterday’s FOMC meeting.  It is back at 1.27%, 4bps higher than yesterday’s close, amidst a broader curve steepening move, the 30y bond is also higher, by + 2.6bps to 1.92%.   Corporate issuance, including a multi-tranche offering from Apple, contributed to the curve steepening pressure while a look at break evens and real yields suggest the overnight moves have been driven by an increase in inflation expectations. The 10y BEI is up 2bps to 2.42% while the US 10-year real yield, at -1.15% is little changed and close to its near its all-time low.

Moving onto FX, the USD has been under downward pressure since yesterday morning’s Fed meeting, with the general consensus now that the Fed won’t make a tapering announcement until late this yea.  The Bloomberg DXY index is down 0.4% and now trading at a one-month low, with ultra-low US real yields and positive risk appetite weighing down on the USD.

The NZD has outperformed overnight and is back above the 0.70 cent mark (+0.9% over the past 24 hours). Notably as well the kiwi is stronger in the crosses, after briefly trading above 1.06 on Wednesday, the AUDNZD now trade at 1.0552. Indeed, the AUD while still outperforming the USD over the past 24hours, it is a notable lagger, up “only” 0.3% against the USD . The pair now trades just below the 74c mark not helped by a new high in Covid-19 case numbers in NSW yesterday (239), further entrenching expectations for an extended lockdown.  The RBA is expected to reverse its plan to taper its bond buying in September, with some economists even arguing that it will announce an increase to its weekly bond buying pace in light of the expected hit to growth from the lockdowns.  Iron ore prices have also remain under pressure, down 6% overnight following confirmation China has raised tariffs on some steel materials, and removed rebates on cold-rolled products, as authorities ramp up efforts to overhaul the sector and tame a surge in prices. 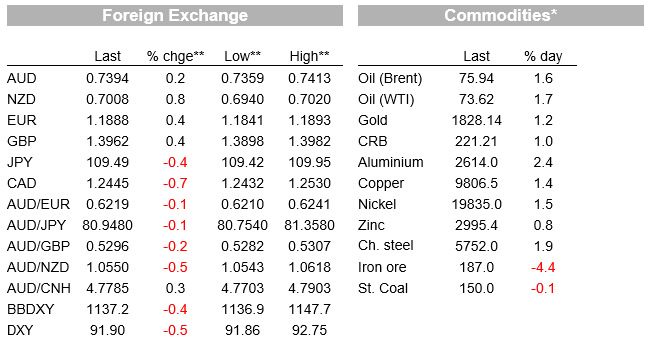 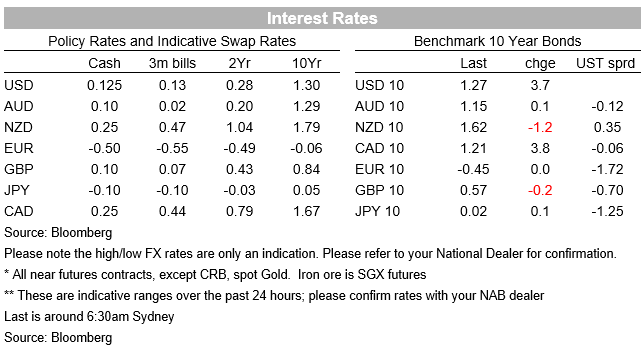