Markets Today: Russia turns off gas for Poland and Bulgaria

The World Bank has warned the war in Ukraine is set to cause the “largest commodity shock” since the 1970s (referencing the 1973 oil embargo).

Overview Rock and a Hard Place

US Treasury yield have fallen back further overnight in bull steepening fashion (2s currently -10bps, 10s -5bps) driven not so much by the incoming US news flow as building global growth concerns from increasing resignation to the likelihood of no early end to either the conflict in Ukraine or China’s Covid -Zero policy, where the fear that Beijing is about to join Shanghai in lockdown is palpable. Oil and gas prices are both back of a tear on news that Russia is to cut off gas supplies to Poland this month over its refusal to pay in rubles, and Russia has just said the same to Bulgaria (to start later today).  The US dollar, propelled higher mostly by rising US Treasury yields in recent weeks, is now being driven up by safe haven considerations and where US stocks have closed with losses of between 2.5% and 4%, with further falls in prospect in futures trading today after Alphabet slumped more than 6% following a ‘miss’ on its Q1 earnings reported after the bell.   When one door shuts (on the USD) another one opens, so it would seem.  AUD is weaker on USD strength, more than giving back its small rally back above 0.7200 during out local time one, but is faring much less badly than many other G10 currencies, thanks in part to USD/CNH not rising back up through 6.60 overnight, plus firmer energy prices.

The vast majority (~80%) of US S&P500 companies reporting quarterly earnings continue to beat consensus Wall Street estimates, yet it is the ‘misses’ from some of the more high profile/household names that are having the bigger impact on the overall stock market performance and amid deepening concerns that corporate earnings, however strong now, cannot usurp the stiffening (global) economic headwinds stemming primarily from the ongoing war in Ukraine and China’s Covid-Zero policy. Two such household names are General Electric and Tesla, GE’s stock plunging more than 10% Tuesday after providing guidance that earnings would likely be towards the lower end of its forecast range for this year, citing supply chain disruptions, including from lockdowns in China, and the war in Ukraine. Tesla slumped more than 12% with investors seemingly wary of Elon Musk’s likely need to sell a chunk of his shares to fund his Twitter purchase. Post the NYSE close, Alphabet has lost about more than 6% after a miss on its earnings, while Microsoft is down over 4% even though it beat its street estimate on both its quarterly EPS and revenue numbers.

Losses for the NASDAQ accelerated into the close prior to Alphabet and Microsoft’s earning report to finish down 4%, versus -2.8% for the S&P500 where energy (up just 0.04%) is the only sub-sector not in the red and where a 5% fall in Consumer Discretionaries has led the way down. On the latter, the expectations component on the Conference Board’s Consumer Confidence survey, though up marginally at 77.2 in April from 76.7 in March, remains mired at a 9-year low.  Other US data out overnight included a 8.6% fall in New Home Sales, well below the 0.6% expected and only partly because of  (modest) upward revision to February, a clear reflection of the impact of the sharp rise in (30-year) mortgage rates this year and where squinting though the (extreme) month-to-month noise are clearly trending downwards since the start of the year. We also had march Durable Goods Orders, up 0.8% in headline terms close to the 1.0% consensus, and an +1.1% ex transport above the 0.6% estimate, as too was the non-defence ex-aircraft core measure at 1.0% vs. 0.5% expected.

Higher oil and gas prices overnight stem from Polish media reporting that Russian gas flows through the Yamal pipeline have been halted. A refusal to settle gas trads in rubles is said to the reason. Russia currently provides about 55% of Poland’s annual demand. Poland has long been weaning itself off Russian gas, having built a pipeline from Norway and has built an LNG terminal in the Baltic, where it will get supplies from Qatar, the US and Lithuania. It said back in March that it would be independent of Russian gas in 6 months (its long-term gas contract with Russia’s Gazprom expires at the end of 2022). Five hours after this (post close) comes the headline that Bulgaria say Gazprom is to halt gas supplies from April 27 (i.e. today). The benchmark TTF front month European gas contract was as much as 13% higher, before closing about 5%. Crude oil prices meanwhile are up over $3 for both the WTI and Brent contracts, to $101.90 and $105.40 respectively.

Other commodity prices are mixed , with ally -0.8% but copper +0.9%, while iron ore futures are up for the second day running though still only partially reversing Mondays’ sharp (7%) fall. Helpful here are the realisation that China will have to resort to still more ‘old school’ commodity intensive infrastructure spending to try and offset the hit to the economy from ongoing lockdowns that may shortly extend to Beijing.  On this and apropos today’s song title, the more limited efficacy (and faster half-life in terms of ongoing immunity) of China’s vaccines, plus the number of elderly (80+) year-olds not to have bene vaccinated, seemingly condemns China to an ongoing Covid-zero policy until or unless mRNA vaccines (or therapeutics) are rolled out en masse.

On a related note the war in Ukraine is set to cause the “largest commodity shock” since the 1970s – referencing the 1973 oil embargo – the World Bank has warned. In a new forecast, it said disruption caused by the conflict would contribute to huge price rises for goods ranging from natural gas to wheat and cotton. The increase in prices “is starting to have very large economic and humanitarian effects”, Peter Nagle, a co-author of the report, told the BBC. He said “households across the world are feeling the cost of living crisis”.  “We’re particularly worried about the poorest households since they spend a larger share of income on food and energy, so they’re particularly vulnerable to this price spike,” the senior economist at the World Bank added.

Latest commodity prices developments look to have partially shielded the AUD from the worse of USD strength – as too stability in USD/CNH, though it has still lost nearly 0.8% in the last 24 hours and where the very poor end to the NYSE day and now pressure from Alphabet/Microsoft has it ending the NY day on the lows (0.7123). JPY meanwhile is getting some relief  from the fall back in US Treasury yields, unlike GBP and EUR which have both been friendless since our market went home Tuesday.  The DXY USD index has added another 0.6% to 102.35, now not far off its 103 high seen in the early days of the pandemic. 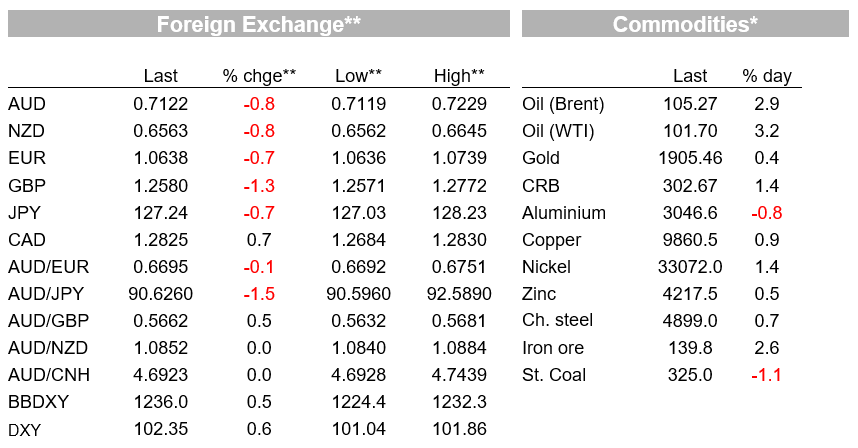 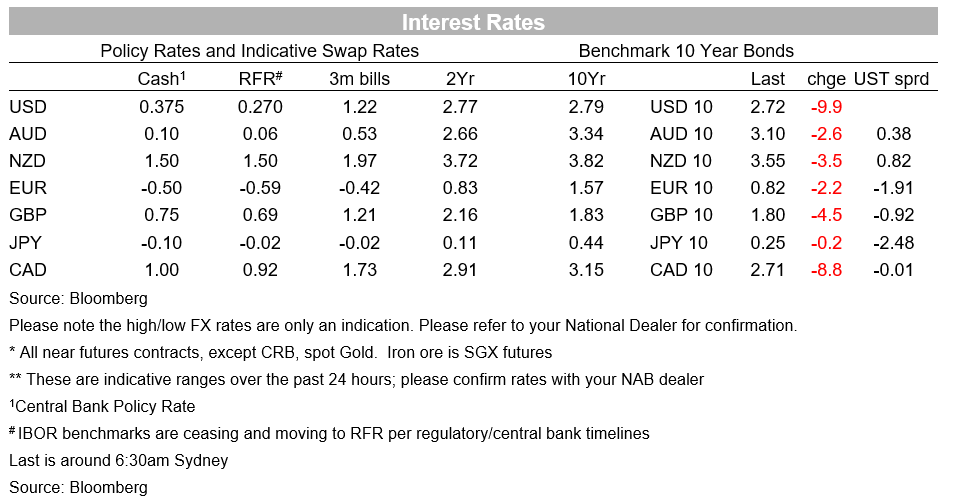