Overview Where Do We Go?

Risk assets reversed their post-FOMC gains. US equities fell, the dollar surged back to pre-FOMC levels, yields were higher and curves steeper. With no obvious news flow to explain the sharp reversal, it seems instead that the relief of Powell indicating 75bp moves were likely a step too far gave way to a renewed focus on high inflation and a challenging growth outlook. The pound and gilts underperformed as the BoE met expectations for a 25bp rate rise but painted a grim picture of the outlook.

US equities sharply reversed yesterday’s moves. The S&P500 closed 3.6% lower with all sectors in the red and losses led by consumer discretionary and tech. the index at one point down as much as 4.5%. The Nasdaq was 5.0% lower. The euro stoxx 50 was off a comparatively mild 0.8%. US yields were higher and the curve steepened. The 10yr gained 10bps, moving back above 3% and sitting around 3.04% after getting as high as 3.1% before some late pull back. The 2yr was 6bps higher at 2.70, still well below its levels around 2.81 ahead of the FOMC meeting. Most of the move at the 10yr came in real rates, with break evens little changed in the past 24 hours.

Currency markets too reversed course from yesterday. The dollar rose, up more the ¾% against each of its G10 peers. The DXY was 1.0% higher. The AUD was 2.0% lower, mirroring its outperformance yesterday in reverse. The AUD fell from an intraday high of 0.7266 to now be around 0.7112 after dipping as low as 0.7077. It is back to its levels in our time zone on Wednesday. The dollar gained 0.8% against the yen. The euro was off 0.8%, while the pound underperformed, down 2.1% on the reaction to the BoE (more below).

The main event overnight was of course the BoE. The Bank raised its Bank Rate by 0.25% to 1.0%. Markets had prices some risk of a larger 50bp move, and 3 of 9 members voted in favour of 50bps. The market reaction seemingly reflected the sombre picture painted by the forecasts and the absence of conviction on a need for future rate increases. “Most members of the Committee judged that some degree of further tightening in monetary policy might still be appropriate in the coming months.” The ‘most members’ reflecting the two members disagreed with guiding for future rate increases. The upshot is a Bank raising rates into a slowing economy as a carefully calibrated and necessary response in pursuit of sustainable, at-target inflation in the medium-term, even as grim reading in the outlook path is driven by imported goods and energy price dynamics and the real income shock.

Inflation is now forecast to peak at over 10% this year, as higher energy prices eventually make it through to household bills after OfGem price cap lifts in April and October. The BoE warns that the operation of the price cap means “consumer price inflation is likely to peak later in the United Kingdom than in many other economies, and may therefore fall back later. ” Inflation is expected to fall back to a little above 2% in 2-years time and to 1.3% in 3 years time. Those projections were conditioned on the market path, with below target inflation at the 3-year horizon a clear sign the BoE saw market pricing as overly aggressive.  In Governor Bailey’s words, the growth projections showed a ‘very sharp slowdown,’ with the unemployment rate expected to rise to 5.5% in three years time after falling slightly further in the near term.

UK yields fell sharply following the meeting. 10yr yields fell around 13bps to 1.81% and the 2yr was off 16bps to 1.80% following the announcement. They clawed their way back alongside the global push higher in yields but continued to lag other moves. The UK 10yr ending up little changed at 1.96% compared to the German counterpart’s 8bp rise, back above 1% at 1.04. The pound was down 2.1% against the dollar.

In other news, OPEC+ stuck to its previously planned increase in output of 432k barrels per day for June, as expected.  Many analysts expect actual production to lag those numbers as most members struggle with capacity constraints. Brent oil was up 0.8%.

The Caixin Services PMI fell to 36.2 in April from 42 previously, outpacing expectations for a fall to 40 and its lowest since February 2020. The number underscores the extent of activity disruption in China as authorities grapple with containing the spread of Omicron. 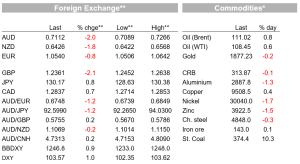 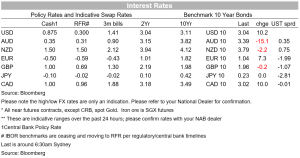 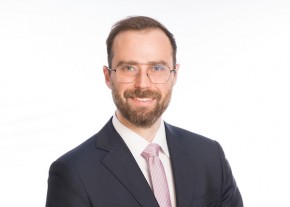