In sharp contrast to US equity market performance, Chinese and Hong Kong stock market had a happy Friday and recorded decent gains on the week, the Hang Seng up 3% on the day and more than 4% on the week (Shanghai 300 +2% on the day and 2.2% on week). Here, Friday’s unexpectedly large cut to the 5-year Loan Prime Rate, -15bps , to 4.45% against a -5bps consensus, was a key driver. The LPR is ostensibly a market-determined rate but the influence of the PBoC had been evident ahead of the announcement, with various measures aimed at reducing bank’s funding costs (including the recently enacted RRR cut) preceding the announcement.

The 5-year rate effectively sets mortgage rates for home buyers, while the decision to keep the 1-year LPR at 3.70% means in effect that corporate borrowing rates are unchanged. Monetary policy easing measures thus continue to be very targeted, perhaps with one eye towards not aggravating incentives for capital flight (in which respect the RMB was stronger out of the LPR announcements, USD/CNH dropping below 6.70, its lowest in two weeks).

US bond markets rallied across the curve on Friday , the 2-year extending Thursday’s yield decline with a 2.6bps drop, leaving them unchanged on the week, while 10s fell by 5.7bps putting them just under 14bps down on the week. 10s are now 42bps off their 3.20% 9 May high. Aussie 10s fell by 10bps on the week

Notable Fed speak on Friday came from St Louis Fed President James Bullard , the FOMC’s resident uber-hawk, who repeated in a Fox Business interview that the central bank should front-load an aggressive series of interest-rate hikes to push rates to 3.5% at year’s end, but which he now says if successful would push down inflation and could lead to policy easing in 2023 or 2024. “The more we can front-load and the more we can get inflation and inflation expectations under control, the better off we will be. In out years – ‘23 and ‘24 – we could be lowering the policy rate because we got inflation under control” Bullard said. He reiterated his support for 50bps rate rises in June and July, but asked about a 75 basis-point hike, Bullard said that couldn’t be ruled out as an option.

From the ECB side, Governing Council member Ignazio Visco told Bloomberg TV on Friday “We can move gradually, raising interest rates in the coming months,” While June is too early as that is when the ECB will end net bond purchases, “we will move after that — after that, means perhaps July.”

Also speaking Friday, BoJ Governor Haruhiko Kuroda said 2% Inflation in Japan Is unlikely to last.  “Prices are moving exactly as we have predicted,” said Kuroda, speaking to reporters in Bonn, Germany Friday where he had been attending the Group of Seven finance chief meetings. “We’d said before that given the likely disappearance of the effect of mobile phone fee hikes and the impact of energy prices, inflation is likely to reach around 2%”.  Right now it’s appropriate to maintain monetary easing, including the negative interest rate,” he said. “A rise in prices is unlikely to be sustained when it’s triggered by a rise in commodity prices and worsening trade factors.”

FX Markets had a fairly quiet Friday, lacking fresh fundamental influences, where the USD recovered a little of its mojo following Thursday’s fall of more than 1% in DXY terms. It gained 0.4% Friday though this still left it 1.4% lower on the week (ditto the broader BBDXY). AUD had a fresh flirtation with sub-0.70 levels but the low was 0.7002 and the pair subsequently spent some time bove 0.7050 before ending the week at 0.7040 (1.4% up). The firmer CNH looks to have provided  degree of support during the local time zone.

NZD turned in the best G10 performance Friday (-0.2%) followed by GBP, the latter +0.1%, drawing a  little support from much better than expected April retail sales. These were up 1.4% whereas, being the month that the 53% jump in household utility prices hit following the earlier announced lifting of the price cap by energy regulator, it expected retail sales would fall by 0.3%. These are volume, not value figures, making the 1.4% rise all the more surprising. UK money markets remain fully priced for a 25bps Bank rate rise in June and ascribe about a one-third chance to a 50bps move.

Finally in commodities, It was a good day and week for iron ore (up 6% Friday and 5.6% on the week), seemingly buoyed by optimism toward stepped-up China infrastructure spending. Price were more mixed elsewhere Friday though on the week LMEX posted a 4% gain and thermal coal was up over 6%. In the circumstances, one might have expected the AUD to have been uniformly stronger on the crosses, whereas in fact its performance was mixed (e.g. up versus CAD and JPY but down against the NZD, GBP and CHF). 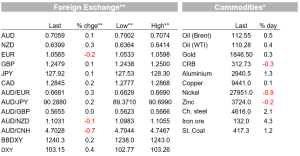 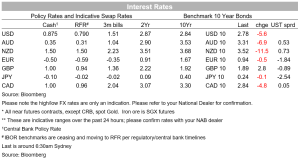 AMW: How will central banks respond to recession risks?