Markets Today: A bad end to a solid month

Markets turned a little sour at the end of the week.

Overview: A pub with no beer

“Then the stockman rides up with his dry dusty throat; He breasts up to the bar and pulls a wad from his coat; But the smile on his face quickly turns to a sneer; As the barman says sadly the pub’s got no beer”, Slim Dusty (1957)

So fierce has the rebound in activity been in the UK since the easing of lockdown restrictions that pubs are facing a beer shortage on the May Day holiday weekend. That rebound is also prompting questions over the appropriateness of monetary policy on both sides of the Atlantic with the BoE expected to taper asset purchases at the upcoming May or June meeting. The Feds Kaplan (non-voter) is also eying an earlier tapering for the US, noting he had upgraded his forecasts and now sees the unemployment rate falling to 4.0% by the end of the year – pretty much where the Fed sees full employment. If such a scenario plays out, the appropriateness of current policy settings will continue to be tested with US Payrolls key to that debate. Chair Powell has previously noted it would take a string of months of job creation of about a million a month to achieve the substantial progress required to justify tapering QE given (note payrolls are currently 8.4m below pre-pandemic levels). A much “hotter” number would likely see more Fed officials break with Powell.

As for Friday’s moves, in equities and FX it appears to be mostly driven by month-end flows. The S&P500 fell -0.7%, though over the past week the S&P500 was flat and is up some 5.2% over the month of April. Will the old adage of “sell in May” and go aware play out this year is the question in the short-term. The fact equities weren’t able to extend the past week despite a record 87% of S&P500 companies beating earnings estimates suggests a lot of the good news has been priced. With more talk over valuations and asset tapering emerging, there is some evidence investors are being cautious. EPFR data for the week to Wednesday notes investors moved $57.3bn into cash, which also coincided with relatively low flows into equity mutual funds of $10.5bn. Other analysts note that S&P500 is currently 14% above its 200-day moving average and close to the 15% level which for some technicians suggests overextended gains. Underneath the headline index, 95% of S&P500 companies have traded above their 200-day moving average for 18 separate days, a rare feat with the prior record being 9 days back in September 2009.

The Fed’s Kaplan also notes that he is seeing “excesses and imbalances in financial markets” and is part of the reason why is advocating for a discussion on tapering “at the earliest opportunity” (see Reuters for Kaplan’s remarks ). The main overarching rationale remains on the pace of the recovery which he sees as being much faster than he previously expected and now forecasts unemployment at 4% by year’s end. If that scenario plays out, it is also conceivable rate rises may start earlier with Kaplan stating the Fed may need to raise rates next year. Former NY-Fed President Dudley also notes if the Fed is going to be late in tightening, then that will generate lags in responding to inflation pressures which would require more aggressive tightening later – nominating interest rates may need to rise to at least 3.5% and perhaps even above 4%!

Rates markets were little moved by Kaplan’s remarks with the US 10 Treasury yields down -0.8bps to 1.62%. It is worth noting though over the past week, a clear tilt has occurred to higher rates/inflation pricing with the US 10yr yield up 6bps, entirely reflected in the implied inflation breakeven which rose 6.5bps to 2.41% with the 10yr real yield broadly unchanged at -0.78%. Inflation fears are clearly lifting with several anecdotal reports of consumer goods manufacturers passing on costs to retailers – the w/e FT noted Nestle, Unilever, Reckitt Benckiser had raised prices in Q1, while Proctor & Gamble and Kimberly-Clark have announced “mid to high single-digit” price increases starting later in the year (see FT: Global brands prepare to hit customers with higher prices). Despite those price rises, central banks are still likely to see them as not being maintained.

US data was very strong with the Chicago PMI lifting to its highest level since December 1983 to 72.1 against 65.0 expected. The prices paid series in the Chicago PMI also skyrocketed to a 41yr high with reports of raw material shortages and transportation problems. The Core PCE Deflator also came in one-tenth more than expected at 0.4% m/m v. 0.3% expected, though in this it was driven by the volatile “financial services charges and fees” component which rose 13.0% m/m and added some 0.1 points to the core deflator. PCE data also included the strong income figures which were boosted by the stimulus with personal income +21.1% m/m (consensus 20.0%), while spending rose only by 4.3% m/m and suggestive of higher consumer spending in Q2 in what could be a mammoth quarter for GDP on both sides of the Atlantic (as Europe eases lockdown restrictions). A lift in the Employment Cost Index to 0.9% q/q vs 0.7% expected, also has some asking whether wages pressures are lifting.

In contrast, European GDP data confirmed the recession with Q1 GDP -0.6% q/q vs -0.8% expected. With the vaccination programme back on track in the region and restrictions likely to ease, Q2 is expected to be much better. Markets are likely to continue to pivot towards a European re-opening trade, while Biden’s stimulus agenda looks like it will continue to be pushed back with the eventual envelope likely a lot lower given Democratic Senator Manchin’s ongoing push back. In a w/e interview, Manchin noted “ Now we’re in a situation we don’t have that urgency (unlike COVID-19 relief), that time sensitivity, that ‘We gotta do this. We gotta do infrastructure.’ Infrastructure should have been done 10, 20 years ago. It’s not like a do-or-die right now” and has previously said he is opposed to using budget reconciliation and bypassing filibusters again out of fears of the precedent it would set for future administrations (see USA Today interview for details).

Virus/vaccine news remains favourable for developed markets and continues to allow markets to price the other side of the recovery despite the woes being seen elsewhere, namely in India. US has now fully vaccinated 39.8% of its adult population – that 40% benchmark is widely seen by scientist as key in the fight against COVID with Israel showing a precipitous drop in new daily cases once this benchmark was seen. Across the Atlantic, the UK may be the first country to reach herd immunity according to the ONS. In England, an estimated 7 in 10 adults or 68.3% of the adult population  would have tested positive for antibodies against the coronavirus on a blood test in the week ending 11 April 2021, suggesting they had the infection in the past or have been vaccinated. Meanwhile the UK is now calling up people as young as 40 to be vaccinated.

Domestic focus will be on the RBA this week with the Board Meeting on Tuesday and SoMP forecasts on Friday. Deputy Governor Debelle is also speaking on Thursday on ‘Monetary Policy during Covid’. Details below:

Offshore it’s a crowded calendar with the main highlights being US Payrolls, US ISMs, Bank of England, Norges Bank:

Domestically House Prices for April are out along with ANZ Job Ads. Offshore it is very quiet outside of the US given May Day Labour public holidays in many countries. Asia takes an even longer May Day Holiday with China out until Friday. The main piece of offshore data is the US Manufacturing ISM. Details below: 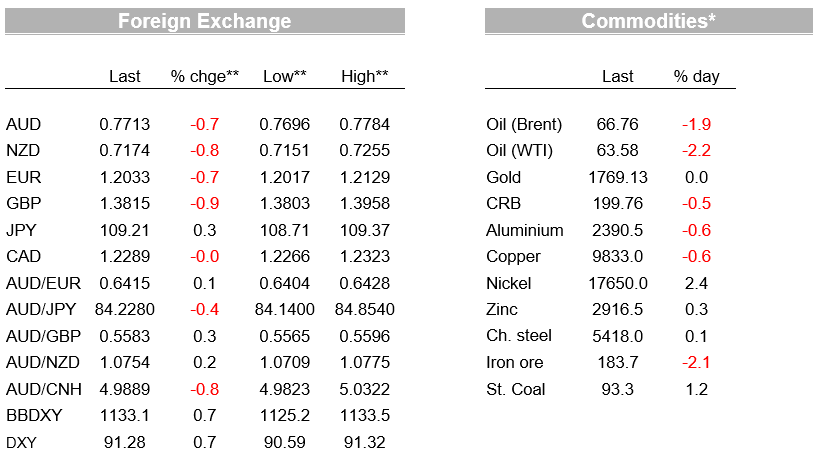 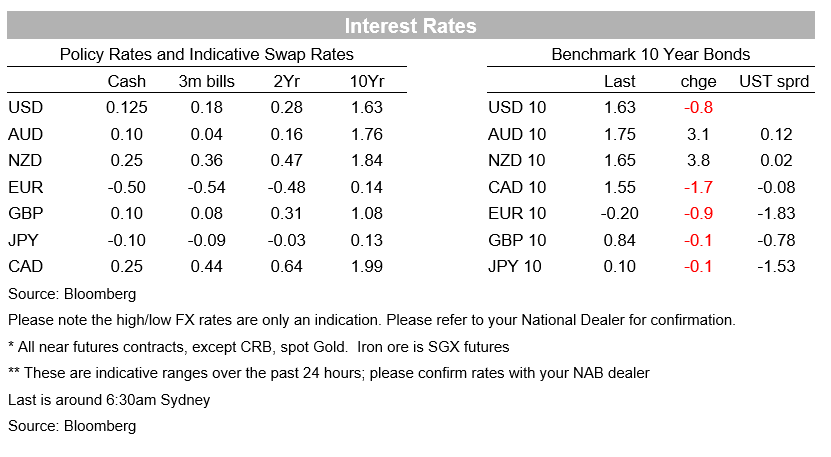 The AUD failed to benefit from the generally weaker USD, in contrast to all other major currencies which rose during the last week of July. From mid-month, a very sharp fall-back in iron ore prices, albeit a commodity with a very fickle and sometimes non-existent short term relationship with the AUD, drew attention