Overview Walking on a dream

“Walking on a dream; How can I explain; Talking to myself; Will I see again?”, Empire of the Sun 2008

The antipodean central banks are taking an optimistic view of the recovery with the RBA pushing ahead with its tapering of asset purchases (despite the protracted Sydney lockdown) and the RBNZ has as good as said the central bank will lift rates in August. US equities are also with the S&P500 +0.8% to hit a new record high with investors continuing to take signal from strong corporate earnings with 88% of S&P500 names reporting positive earnings surprises for Q2. Cyclical names such as mall owner Simon Property (+2.5%) reported sales back at pre-pandemic levels. FX and bond markets though are keeping to a more caution tone given the delta variant outbreak, particularly in Asia with USD/Yen -0.2% and EUR/CHF -0.2. The AUD (+0.4%) and NZD (+0.6%) outperformed on the above central bank news, though importantly gains were not extended overnight. US yields were little moved (US 10yr -0.7bps to 1.17%), though yields have fallen for three consecutive days. Highlighting delta concerns, in China 31 provincial regions are warning against travel, while Chinese regulatory action has flared again, this time online gaming, termed “opium for the mind” .

First to delta concerns in China. The Chinese press are reporting 31 provincial level regions are warning against unnecessary travel, suggesting that residents stay at home in light of the outbreaks from the delta variant. Wuhan has begun city-wide testing in an eerie echo to the original COVID-19 outbreak. While China’s resolve to control outbreaks has been well illustrated, markets will continue to watch the outbreak given the high transmissibility of the delta variant. There are also concerns China’s domestic vaccines are less effective against the Delta variant. Yesterday China reported 61 new locally transmitted cases. In contrast in the US, the rise in delta cases is not leading to tougher restrictions. Instead many parts of the US are using a carrot/stick approach to lift vaccination rates further (note 60.6% of US adults are fully vaccinated) with New York City set to implement vaccine green passes where people would have to show proof of vaccination for indoor activities, such as dining, gyms and events. The new policy will be implemented on August 16. The lack of new restrictions in the US should enable the recovery seen in the earnings season to continue.

Oil prices (Brent -0.5% to $72.51) are trading on the soft side given delta concerns in China. One analyst from China raised the possibility of a 5% wipe-out of demand through this round of infection. Reduced travel is evident as flights are being cancelled, as is cross-regional trucking activity. FX markets are also showing a slight safe haven bid with USD/YEN -0.2% and EUR/CHF -0.2% , while the broader USD index was little changed. The Antipodean currencies top the G10 leader board with NZD +0.6% and AUD +0.4% after updates from the RBNZ and RBA yesterday (see below for details). Notably though both currencies have not extended gains further, suggesting a degree of caution remains.

As for the antipodean central banks, they are taking an optimistic view on the outlook. The RBNZ gave greater signal to an August rate hike in commentary to a statement that it would tighten mortgage lending standards further by restricting the amount of lending banks can do above an LVR of 80% to 10% of all new owner-occupied loans, down from 20% at present (that change in policy will come in from 1 October). In the commentary the RBNZ admitted that house prices were above their sustainable level, acknowledging that low interest rates were a factor. Governor Orr noted that the OCR and the Bank’s financial stability tools “need to be mutually supportive” and the MPC “needs to think about when and how [not if] we would return interest rates to more normal levels ” and that “our next opportunity…is the 18 August Monetary Policy Statement”. (see RBNZ Statement for details).

NZ markets reacted to the hawkish signal and yesterday OIS pricing for the August meeting rose 6bps to 0.47%, taking the probability of a 25bps hike for that meeting to 88% and the market is back to pricing just over two 25bps hikes for the three remaining meetings this year. This fed through into short-term swaps yields, with the 2-year rate closing up 7bps to 1.12%, its highest level since pre-COVID. Global rates were held down by global forces and, with little change in the 10-year rate, there was a significant flattening of the curve.

Meanwhile, across the ditch the RBA surprised markets by sticking to its taper plans of reducing purchases to $4bn from $5bn a week starting from early September, despite the protracted lockdown in Sydney. Instead the RBA remained optimistic, noting that “the economy bounces back quickly. [and that] Prior to the current virus outbreaks, the Australian economy had considerable momentum…” . While Q3 GDP was expected to decline due to the lockdowns, the RBA has lifted its 2022 forecasts to “a little over 4 per cent” from the 3½% forecast in the May SoMP, incorporating a strong rebound from the lockdowns. The post-Meeting Statement overall read optimistically and one gets the feeling that if it wasn’t for the lockdowns it would have been read as somewhat hawkish. The RBA also lowered its unemployment rate forecasts by a quarter point to 4¼% by the end of 2022 (from 4½% in the May SoMP). Importantly, the unemployment rate is forecast to fall further to 4% by the end of 2023 with core inflation at 2¼% and thus within the RBA’s 2-3% inflation target.

Thus for the RBA should the flow of economic data surprise to the upside on the other side of the lockdowns, a 2023 hike remains a possibility. There is no change to the RBA’s criteria for starting rate normalisation, namely actual inflation being sustainably within the 2-3% band. Under the baseline scenario underlying inflation gets to 2 ¼% by the end of 2023. There was no forecast on wages growth given (this will be provided in Friday’s SMP and may be the difference between the forecast for 2-3% inflation and sustainable 2-3% inflation), with the RBA previously indicating that inflation sustainably at target requires wages growth at 3% plus. NAB’s view is that the first hike will occur in early 2024. We acknowledge the risk of on an earlier move in late 2023, if the economy continues to surprise to the upside, though we do not see a large risk of a move as early as 2022.

US Fed officials were also out overnight with both Fed Governor Bowman and San Francisco Fed President Daly in the camp of needing to see more progress on the labour market, joining Governor Brainard. Meanwhile Fed Governor Waller earlier this week said two more reports of employment gains would see him backing taper at the September FOMC meeting. We hear from Fed Vice-Chair Clarida later tonight.

Retail sales are the pick domestically, though more focus will be on employment data across the Ditch given expectations of the RBNZ hiking rates in August. Offshore China is in firm focus given the delta variant outbreak and growth concerns. In the US the Fed’s Clarida will be watched closely on tapering hints, as will ADP Payrolls and the ISM Services Index. Details below: 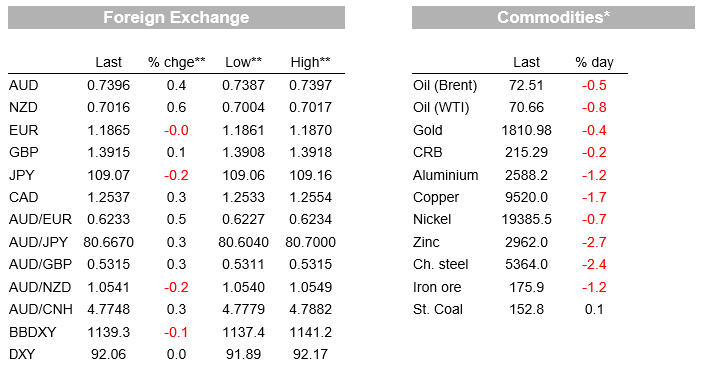 Markets Today: And back to recession fears