US markets being out for the Labor Day holiday hasn’t prevented global equity markets forging ahead. The US dollar has recouped a little of its (further) losses seen post last Friday’s US payrolls report and since AUD and NZD have been the two biggest beneficiaries of USD slippage of late, no great surprise they have lost a little more than most other currencies overnight.

US markets being out for the Labor Day holiday hasn’t prevented global equity markets forging ahead, new record highs being posted for the Eurostoxx 50 and indeed the MSCI World Index, and following strong gains for the Nikkei and Shanghai’s CSI 300 yesterday. The US dollar has recouped a little of its (further) losses seen post last Friday’s US payrolls report, for no obvious news reason, and since AUD and NZD have been the two biggest beneficiaries of USD slippage of late, no great surprise they have lost a little more than most other currencies overnight. AUD/USD is off a third of a percent on last Friday’s New York close to 0.7436 but still pretty much where we left it yesterday evening. Rightly or wrongly, all eyes locally today on whether the RBA will proceed with its earlier-announced plans to taper its weekly bond purchases from $5bn to $4bn per week. Latest China trade data also due.

News flow of relevance to markets has been quite limited so far in the new week, and with US markets out – albeit the S&P 500 futures contract has managed a 0.2% gain US 10-year Note futures are down about an eighth of a point – European markets have been left to fend for themselves. Eurostoxx 50 making a new record high implies no evident fear of the ECB dialling back on the pace of bond purchases in Q4 after it meets on Thursday . This is even though it is the diminished prospects for an imminent slowdown in the pace at which the Fed’s printing presses are running that has been a major factor buoying risk asst markets since Friday’s softer than expected US employment figures.

Possibly helping Eurozone stock markets overnight was the reported jump in Germany Factory Goods Orders in July of 3.4% , marking a second successive strong monthly gain and against expectations for a fall. The number was though flattered a by a jump in (foreign) demand for ships, and domestic orders were down -2.5% – though the latter after an out-sized 9.8% jump in June. In recent months, the link between total factory orders and industrial production has been broken by supply constraints, meaning that production can’t keep up with demand. This is likely to again show up in tonight’s industrial production figures, expected to be up just 0.8% on the month after falling 1.3% in June.

European bond market were mostly stronger overnight, with 10 year benchmark bond yields down anywhere between 0.5 and 2.5bps even though implied US yields are a touch higher based on futures. In FX, the DXY USD index is about 0.2% stronger, most of those gains occurring during our time zone. Ditto the modest fall-back in the AUD, currently -0.3% on Friday’s New York close.

Weakness in iron ore prices – Dalian futures off 3.6% – might have had a small hand in AUD slippage, though the fact the NZD lost the same amount as the AUD suggests otherwise (the kiwi still suffering on a day where there was positive news on further easing of lockdown restrictions outside Auckland, with the spread of the Delta Covid-19 strain apparently coming under control.

Yesterday, we had some rhetoric from Chinese state-owned newspaper The Global Times, reporting that authorities are mulling supports to ensure iron ore supply, including significantly increasing domestic output and promoting overseas projects to reduce reliance on imports ‘from countries such as Australia’, amid rising tensions. This was on the same day that Treasurer Frydenberg gave a speech on Australia’s trade relationship with China, where one of main messages was that the government will encourage firms to diversify the markets they operate in on the premise that companies should expect more, not less, trade tension with China.

Elsewhere is commodities, oil was off about 40 cents per barrel for both WTI and Brent crude, falls which followed news that Saudi Arabia wa cutting prices for Asian buyers – while copper and aluminium were both stronger and gold off $4.5 to $1,823. 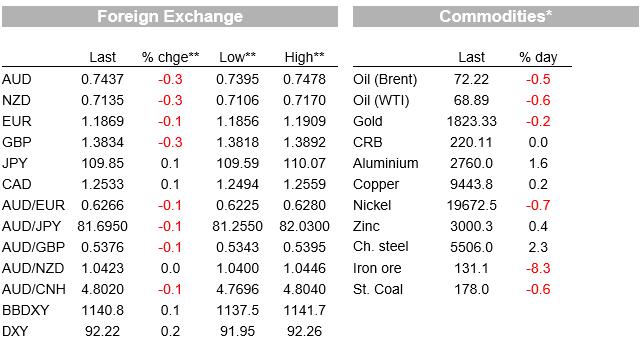 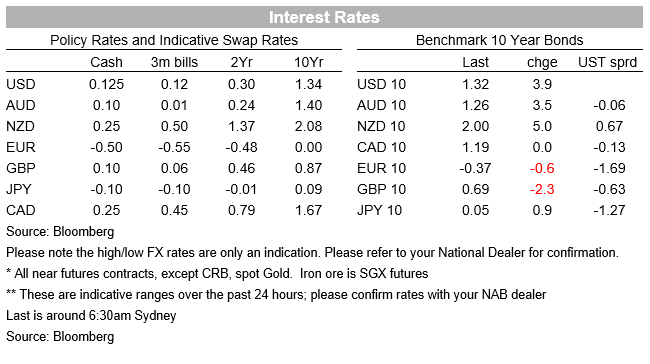