The rise in energy prices is fuelling concerns that the transitory lift in inflation seen in the wake of the pandemic may prove to be longer lasting.

Energy prices continue to rise. WTI oil hit its highest level since 2014 with an intra-day high of $82.18 to settle up +1.5% to 80.5. The rise in energy prices is fuelling concerns that the transitory lift in inflation seen in the wake of the pandemic may prove to be longer lasting. The BoE appears to be the first to have blinked with BoE Governor Bailey in a newspaper interview noting “… we have got to in a sense prevent the thing [inflation] becoming permanently embedded because that would obviously be very damaging “, while his MPC colleague Saunders said it was “appropriate” markets have brought forward pricing which now sees 50% chance of a 15bps hike in November. At least one major bank (BofA) has moved forward its call for a BoE rate hike to December from February 2022. Yield were unsurprisingly higher on the mix of higher oil prices and hawkish rhetoric with UK 10yr Gilt yields +3.0bps along with German 10yr Bund yields. Note US bond markets were closed overnight due to the Columbus Day holiday.

Equities were mixed with the Eurostoxx50 flat, but the S&P500 has fallen by 0.7% with eight out of eleven sub-sectors in the red. The S&P500 has now fallen 3.8% since its peak in early September. Although there was little economic data overnight, a late headline of China’s President Xi targeting ties between Chinese financial institutions and private firms appears to have extended the initial weakness in equities, a reminder of the ongoing regulatory crackdown in China that looks to be spilling over the real economy according to the PMIs
Focus for equities at least is likely to shift to the Q3 earnings season which kicks off in earnest on Wednesday. In investors’ minds will be how firms are faring given supply-chain disruptions, labour shortages and surging energy prices – the banks are the first to report with JP-Morgan on Wednesday, then BofA, Morgan Stanley and Citigroup on Thursday, followed by Goldmans on Friday.

In FX the biggest mover was USD/JPY which has jumped 1%, to above the 113 mark, driven by a widening yield differential with the US and which has also helped the Nikkei outperform +1.6%. The USD was higher with the broad BBDXY +0.3% with both EUR and GBP down marginally (-0.1%) despite the hawkish words from the BoE. The AUD notably outperformed +0.6% as the economy re-opens and no doubt buoyed by higher energy prices. Energy prices are acting to support Australia’s terms of trade, as well as potentially pushing back green initiatives, the ESG push had been sighted by some analysts for why commodity currencies had underperformed over recent months – though this is likely to have been marginal in your scribe’s opinion.

Also adding to the AUD’s favour are reports of China unloading Australian coal that had been stranded.  Coal supply in China has become increasingly tight and yesterday coal futures in China jumped over 10%, to a new record, after reports that heavy flooding in the Shanxi province had knocked out 60 of the 682 coal mines in the region (which accounts for around 30% of the country’s supply). Analysts think the energy shortage in China will significantly affect industrial power usage later this year, potentially leading to knock-on effects to demand for industrial commodities and activity.  Inflation is also set to spike higher, with economists looking for Chinese PPI inflation to ramp up to 10.5% y/y when the data is released on Thursday. Other commodity prices have also heled up relatively well despite ongoing worries over China’s property sector given Evergrande’s woes are spilling over to other listed property developers. Copper prices were up almost 2% overnight while iron ore futures gained 3.5%.

In Australia, NSW started its phased reopening yesterday, having surpassed the state government’s 70% threshold for fully vaccinated adults last week.  The second phase of its reopening plan, after the vaccination rate exceeds 80%, is likely to be either next week or the one after.  Victoria is likely to start reopening later this month. The AFR is also reporting NSW is looking to increase migration relatively quickly once border restrictions ease which should start to occur once the 80% vaccination threshold is reached – see AFR: Australia needs ‘explosive’ surge of 2 million migrants. The potential easing of border restrictions has important implications for anecdotes of skills shortages which had the potential to spillover to higher wages growth.

The NAB Business Survey dominates domestically, while offshore there will be interest in the UK labour market data around wages, and in the US we have three Fed speakers as well as JOLTS and the NFIB. Details below: 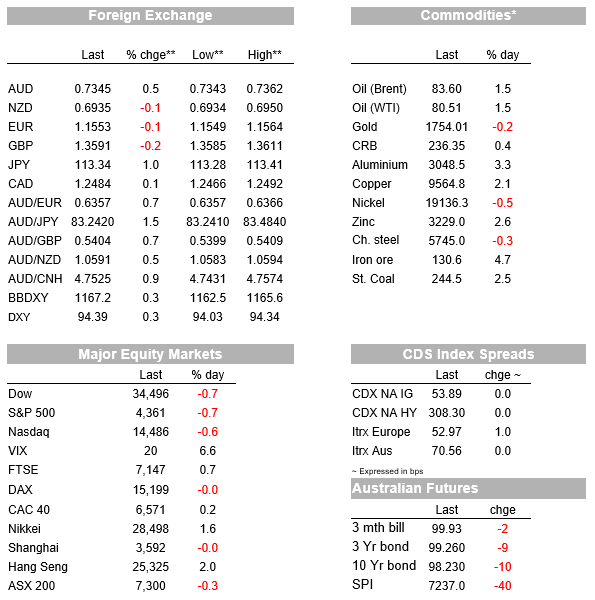 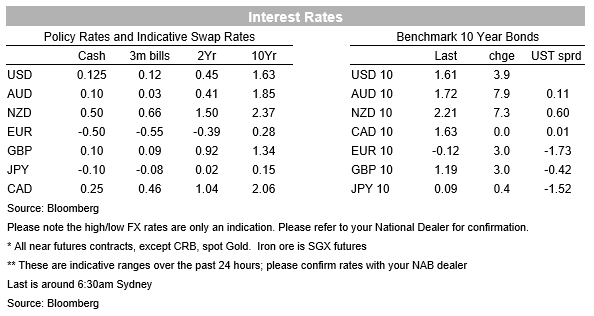