Markets Today: Everyone seems happy to kick the can

Risk asset have enjoyed a solid rebound overnight following news that the US Senate had reached an agreement to extend the debt ceiling through early December.

Well it’s been building up inside of me, for oh I don’t know how long
I don’t know why, but I keep thinking something’s bound to go wrong
But she looks in my eyes and makes me realize and she says “don’t worry, baby” – The Beach Boys

Risk asset have enjoyed a solid rebound overnight following news that the US Senate had reached an agreement to extend the debt ceiling through early December. A pull back in gas prices in the UK and Europe have also eased concerns over a potential energy crunch. UST yields have climbed before payrolls tonight while the USD is a tad softer with pro growth currencies outperforming. AUD leading the G10 gains, now at 0.7314 and testing resistance levels

US equities have extended the rebound that began on the latter part of yesterday’s session helped along by confirmation the US Congress has reached a debt ceiling deal averting the imminent risk of a US government default . A decline in UK and European gas prices after yesterday’s soothing words from President Putin noting that “Moscow was a reliable supplier that always fulfills all its obligations”  also helped sentiment with major European equity indices ending the day with gains over and 1% and 2%. The Stoxx 600 Europe Index climbed 1.6%, the most since July 21.

The S&P 500 has closed the day up 1.05% while the NASDAQ was 1.11%. Consumer discretionary and material sectors have led the S&P 500 gains up over around 1.5% to 1.75% while utilities where the lonely underperformers down 0.47%. A look at the intraday charts reveals most of the gains were achieved at the start of the overnight reflecting yesterday’s Putin news and increasing prospect of a debt ceiling deal during our APAC session yesterday.

After some wrangling, Senate Majority Leader Chuck Schumer confirmed overnight that the US Senate  has “reached agreement to extend the debt ceiling through early December, and it’s our hope that we can get this done as soon as today,” . News reports have suggested a vote may not happen today as Republicans were struggling to get the 10 GOP votes needed, noting that “ a painful “birthing process” was need to make it happen. The Senate is expected to lift the debt limit by $480 billion, allowing for federal borrowing until December 3, when funding for the federal government is also due to end. So this is essentially a kicking can exercise, but hopefully it allows for a resolution to the infrastructure and social spending plan, before a new debt ceiling agreement takes place.

Ahead of China’s reopening metal prices are also enjoying a nice rebound with copper leading the charge, up 2.66% while the LMEX index is up 1.94%. Natural Gas prices have ease from very elevated levels with UK and Dutch futures off around 10%, although they remain at very elevated levels. Of note the improvement in risk appetite has also boosted oil prices, up over 1%.
climbing towards its recent 3½-month high, up 5bps to 1.57%.   In Europe, the fall in gas prices have filtered through to lower breakeven inflation expectations, seeing bond yields in the region stable-to-slightly-lower overnight.  The German 10-year is down 0.5bps, to -0.18%, while the UK 10-year rate is up just 1bp, to 1.07%, despite more hawkish comments from Bank of England officials.

New BoE Chief Economist Huw Pill told a parliamentary committee that high inflation was set to be longer lasting than originally thought and the “balance of risks is currently shifting towards great concerns about the inflation outlook.”   The market prices an 80% chance of a 15bps rate hike by the Bank of England in December, with a further ~60bps priced in for 2022.  Some investors are sceptical the BoE should be considering hiking into a growth-negative supply shock, although the MPC may be  keen to re-establish its inflation-fighting credentials at a time when longer-term inflation expectations are their highest levels in more than a decade (the 5y5y forward inflation swap is at a 12-year high).

The USD has lost a bit of ground as the improvement in risk appetite favours pro- growth currencies with safe-haven pairs the underperformers. Main USD indices are down around 0.1% (DXY now at 94.07) while in G10 the AUD has the led charge, up 0.6% and now trades at 0.7315. Since the latter part of September, the AUD has made several failed attempts to break above the 0.7315 level on a sustain basis. Overnight the AUD had a decent go at breaking higher, printing on overnight high of 0.7324, China is back from holidays today and focus may return to Evergrande’s struggles as well as any offsetting policy measures. Yesterday, PBoC Governonr Gang vow to continue measures to monopolistic behaviour among internet platform companies and strengthen the protection of consumer privacy and data security. China’s regulatory curb as well as US-China trade relationship are the other ongoing topics to watch.

ECB Lane commentary may have played a part on the Euro’s inability to perform overnight. Speaking at an online conference, the ECB Chief Economist  said that “The red zone for everyone is if inflation became persistent at a number that’s immoderately above the inflation target — that’s a very far distance from where the euro area is,” . Lane also added that there are “solid reasons” to believe that a lot of the spike in inflation is related to the reopening of the economy and that there’s a significant transitory element to it.

On this score it is worth noting that ECB minutes from the Bank’s last monetary policy meeting , released last night, also showed divisions re-emerging on inflation, with some members, presumably from the traditionally hawkish Northern European countries, arguing the ECB’s baseline inflation projection for 2023 was too low and the risks around inflation were to the upside

Economic data haven’t been market moving but, for the record, US initial jobless claims fell back to near their post-Covid lows while German industrial production was very weak in August, hampered by weakness in auto production and more generalised supply shortages 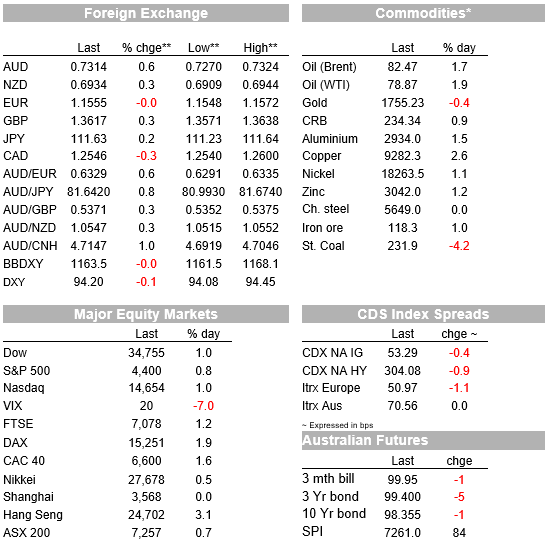 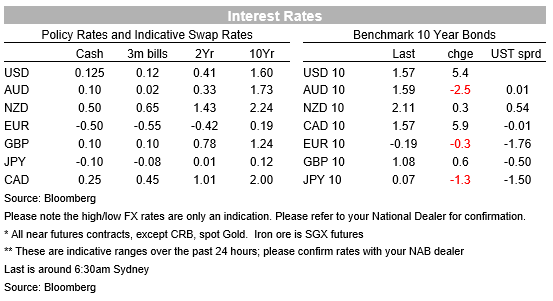