The FOMC minutes gave away more than expected with the Fed suggesting it might be appropriate at some point to discuss a plan to adjust the pace of asset purchases if the economic recovery continues.

Overview: When you say nothing at all

“Without saying a word, you can light up the dark; Try as I may I can never explain; What I hear when you don’t say a thing”, Ronan Keating 1999

A massive night for market moves with two broad themes interplaying. The first seen in APAC was the bloodbath in the cryptocurrency space, which appears to be spilling over to sentiment in tech stocks – Bitcoin was down 30% at one point and is currently trading down -9.1%. Reflective of that dynamic the S&P500 at one point was down -1.6%, but has pared losses to be down ‑0.3% on the day with crypto moves not being seen as systemic. The second and more important theme is whether the lift seen in US inflation will prove more durable with the key implication being the possibility of the Fed needing to normalise policy sooner and perhaps more aggressively. The FOMC Minutes played into that view with “a number of participants ” suggesting it may be time to start discussing a tapering plan “in upcoming meetings”, while “some” also cited upside risks to the inflation outlook. Market reaction to the Minutes was swift with both yields and the USD smartly higher, while equities were little changed and then rallied back in the hour of power. The US 10yr yield is up 3.6bps with a revealing dynamic of the implied inflation breakeven falling (-5.5bps to 2.49%) and real yields rising (+8.8bps to -0.83%). Meanwhile in FX, it was a story of broad USD strength (BBDXY +0.5%) with AUD (-0.9%) and NZD (-1.1%) underperforming, whacked again by the turn in risk sentiment along with a sharp falls in commodity prices.

First up to the Minutes. The key takeaways for your scribe were: (1) a sizeable minority in the FOMC see the need to start talking about tapering asset purchases at upcoming meetings (“A number of participants suggested that if the economy continued to make rapid progress toward the Committee’s goals, it might be appropriate at some point in upcoming meetings to begin discussing a plan for adjusting the pace of asset purchases”); (2) a sizeable minority also thinks the supply chain pressures lifting inflation could extend beyond this year (“A number of participants remarked that supply chain bottlenecks and input shortages may not be resolved quickly and, if so, these factors could put upward pressure on prices beyond this year”); and (3) a minority think inflation could surprise to the upside (“Some participants mentioned upside risks around the inflation outlook that could arise if temporary factors influencing inflation turned out to be more persistent than expected”).

It is worth noting that the FOMC Minutes predate the latest CPI and payroll/earnings numbers, so the fears of the minority on the FOMC are likely to have become a little more acute since the April meeting. The Fed’s Bullard earlier this week also noted the need to look at inflation expectations to monitor the risk inflation expectations become de-anchored on the high side given the rise in inflation – if this were to occur Bullard notes the FOMC “would have to get more active in trying to reassure markets”. Overall there was not much in the Minutes to reassure investors of the risk of the Fed needing to move earlier than their guidance suggests, meaning markets will continue to be very sensitive to upcoming inflation prints, and as Bullard notes markets should also be paying close attention to inflation expectations as well.

As noted above, yields moved higher post the Minutes, with the US 10yr +3.4bps to 1.67%. While the move in nominals keeps yields within their two month trading range, the dynamic being reflected in breakevens is perhaps more revealing with the implied inflation breakeven down -5.5bps to 2.49% with real yields lifting 8.8bps to -0.83%.

Commodity prices have come under pressure overnight amidst the broader risk-off sentiment and as China’s State Council warned about commodity prices, calling for stricter market oversight of commodity markets. Copper prices fell over 3% and oil lost 2%, with the latter having been as much as 5% lower at one point. Still, the pullback in commodity prices overnight needs to be seen in the context of the sharp runup this year (the Bloomberg Commodity Price index is still +17% year-to-date, even after this modest correction).

The USD has increased 0.5%, in index terms, overnight, effectively reversing the previous day’s decline. Around half of the USD’s overnight appreciation has come since the release of the Fed minutes. Even after its overnight rebound, which is typical on risk-off days, the USD is still trading near multi-year lows.

Commodity currencies have predictably underperformed. Both the AUD (-0.9%) and NZD (-1.1%) are at the bottom of the G10 leader board, with commodities the obvious driver given NOK is also down around 1%. The CAD is down a lesser 0.5% with a higher-than-expected CPI release seeing it fare better than other commodity currencies.  Canadian headline inflation was higher than expected, at 0.5% m/m in April (+0.2% expected), while core inflation increased to 2.1%, its highest level since 2012 and consistent with the Bank of Canada meeting its inflation target.

Bitcoin is back in the headlines after some wild moves over the past 24 hours.  Bitcoin fell from around $44,000 this time yesterday to as low as $30,000 – an eyewatering 31% single day decline – before recovering to around $38,000. It’s always hard to pin down the exact drivers but sentiment this past week looks to have undermined by Elon Musk’s about-turn on bitcoin, as well as the threat of regulatory intervention with Chinese banking and payment industry bodies issuing a statement warning financial institutions not to conduct virtual currency related business, including trading or exchanging fiat currency for cryptocurrency.

Closer to home, the economic data remains very solid. Consumer sentiment yesterday remained near its highest level since 2010 while unemployment expectations fell to their lowest level since February 2011 (a time when the unemployment rate was hovering around 4.9-5.0%). Australian wage growth was also stronger than expected although it remains relatively subdued, at just 1.5% y/y.

Employment data is the focus domestically where NAB sees upside risks to the consensus. Offshore NZ has their Budget, while in the US the usual Jobless Claims and the Philly Fed Manufacturing Survey are out. Details below: 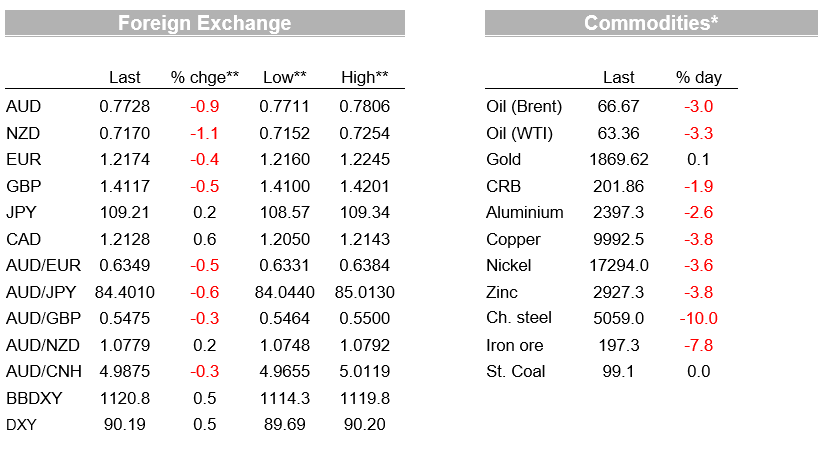 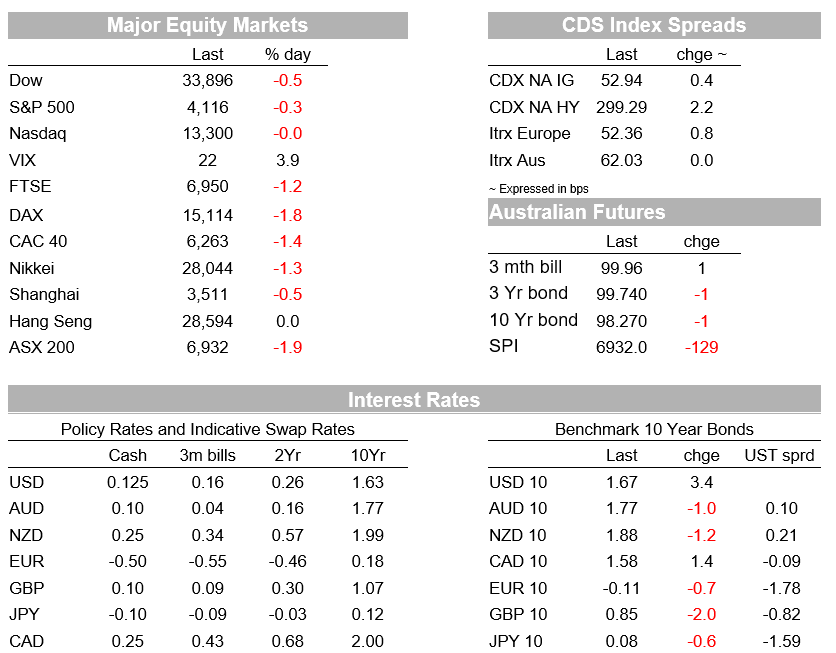 Markets Today: The crawl back is done, reflation takes over

Markets Today: The crawl back is done, reflation takes over

Bond yields are back to where they were before the FOMC meeting, says NABs David de Garis, with the focus now back on the reflation trade.

Digitalisation is enabling more aspects of our world to connect.