US equities have remained resilient and oblivious to the volatility seen in rates markets amid increasing concerns over higher inflation and the prospect of Fed funds rate hikes coming sooner than expected.

You’re simply the best,Better than all the rest
Better than anyone, Anyone I ever met – Tina Turner

October was simply the best for US equities. After a soft start, all three main US equity indices closed in the green on Friday, recording the best month of the year.  Front end yields have remained volatile with inflation related data printing new record highs in the US and Europe. After initially moving higher, 10y UST yields ended the day 2bps lower at 1.55% while the 5y30y curve flattened for a fourth day in a row. The USD was broadly stronger on Friday with the Euro giving back its post ECB gains while the AUD stayed above 75c, the best G10 performer on the week. China’s official PMI, released on Sunday, printed below expectations, and could set the tone at the start of the new week.

US equities have remained resilient and oblivious to the volatility seen in rates markets amid increasing concerns over higher inflation and the prospect of Fed funds rate hikes coming sooner than expected. After initially trading lower, all three main US equities indices managed to end Friday with modest gains and in the process recording the best performance month so far this year. The Dow rose 0.25%, the S&P gained 0.19% and the Nasdaq climb 0.33%. The NASDAQ was the best performer on the week, up 2.7% while our APAC region was the underperformer with the Hang Seng, down 2.87%, our S&P/ASX200 -1.24% and China’s CSI 300 -1.03%.

Apple (-1.8%) and Amazon (-2.2%) were the notable underperformers on Friday with both companies reporting revenues below analyst expectations. Supply chain disruption and rising input cost was a theme while there were also winners with Ford, ExxonMobil and Chevron performing well after reporting better than expected results.

Higher inflation remains a major theme in markets although US equities continue to show resilience, performing well notwithstanding the rise in front end yields as the market brings forward rate hike expectations. Arguably Europe may be showing a higher degree of sensitivity with main regional indices having a mixed performance on Friday.

The US core PCE deflator rose 0.2%mom in September, in line with expectations taking the yoy reading to 3.3%, the lowest since March. This is a small reprieve ahead what is expected to be a new wave of price pressures, with used cars, hotel rooms and airline tickets prices all seen rising over the last few months of the year. Meanwhile the US employment costs index jumped by 1.3%, well above the consensus, 0.9%. This was the biggest quarterly rise in 31 years driven by the biggest surge in wages since Q3 1982, up 1.5%. If labour supply does indeed rebounds in Q4, following the end of generous unemployment benefits, the return of schools and the decline in US Covid-19 cases, then wage pressures should ease, but if they don’t then the tightening in the US labour market will be judged as more permanent and it will likely force the Fed’s hand into hiking sometime next year.

Meanwhile in Europe, the October CPI shot past expectations equalling its all-time high at 4.1%, up from 3.4% in the previous month. Although energy prices accounted for the biggest chunk of inflation, underlying prices were also higher core CPI pushed up from 1.9% to 2.1%, above the 1.9% expected, fueling market inflation concerns and rate rise expectations.

Indeed the market continues to bring forward the expected timing of ECB rate hikes following President Lagarde’s ‘half hearted’ pushback against market pricing on Thursday night, with now 20bps of hikes priced in by the end of 2022 and 60bps by the end of 2023.  The German 5-year rate was 5bps higher on Friday, hitting its highest level in 2½-years, at -0.39%, while Italy’s 10-year yield pushed another 12bps higher, with the market anticipating less ECB bond buying support ahead.  10y BTPS climbed 17bps on the week.

10y UST yields climbed to an intraday high of 1.6172%, with the strong wages data initially aiding the move up, but later in the session the back end of curve came under pressure with month end buying playing a hand while the bringing forward of Fed funds rate hikes also weighed on medium to long term growth expectations. 10y UST yields ended the week at 1.55%, down 2.6bps  on the day and 8bps lower on the week.  The 2y rate climbed 4.4bps on the week while the 5y30y flattening extended for a fourth day, the curve started the week at 91bps and closed the week at 74bps

In Australia, the RBA again decided against enforcing its Yield Curve Control (YCC) policy on Friday, with the April 2024 bond jumping another 24bps, after gaining 33bps on Thursday and closing the week at 0.7325%.  Given the RBA’s lack of commitment NAB updated its monetary policy call, bringing forward hikes to mid-2023, seeing YCC ending on Tuesday and QE ending in February. The market prices an almost 40% chance of an RBA rate hike at the February 2022 meeting a cash rate of 0.9345% in years’ time.  The volatility wasn’t confined to the Australian short end, with the 10-year rate increasing a massive 24bps, to a 2½-year high of 2.09%, before reversing that move during Friday night futures trading.

US Treasury changes on the week

Moving onto FX markets the USD had a solid end to the week, it began rising on Friday during our APAC session but then the move accelerated post the ECI record print, month end flow also seemingly supporting the greenback.  After gaining close to a 1% gain post the ECB meeting on Thursday, the euro gave back all of is gains closing the week at 1.1557 and along with the NOK ending the week as the biggest G10 underperformers. The AUD fell 0.34% on Friday closing the week at 0.7518%, yet it still managed to be the G10 performer on the week, up 0.7% in the past five days. That said, form a technical perspective it is notable that the AUD remains unable to climb above key resistance at the 200-day MA (0.7558). The AUD opens the new week at 0.7511, showing some weakness early this morning and likely reacting to the softer than expected China PMI prints on Sunday (more below). NZD starts the new week at 0.7159.

Commodities didn’t have a good Friday with most recording lower prices on the day. Copper fell 1.59%, aluminium was down 1.09% and iron ore fell 4.46%. USD strength a factor on Friday, but there was broad weakens evident in the weekly performance with iron ore the underdog on the week, down 10.39%.

Softer than expected official China PMI may set the tone for pro -growth currencies and commodities on Monday (AUD already showing some sensitivity). China official manufacturing PMI declined to 49.2 from 49.6 in October. That was below expectations for a 49.7 outcome, meanwhile the non-manufacturing gauge, which measures activity in the construction and services sectors, softened to 52.4 from 53.2 in September, below the consensus forecast of 53. Power shortages and surging commodity prices weighed on manufacturing, while strict Covid controls put a brake on holiday spending.

In other weekend news, Japan’s LDP party looks poised to comfortably retain its outright majority, against expectations of a much closer result. Early this morning local media suggest the LDP looks set to win as many as 253 seats while Komeito, its minority coalition partner was on track to retain its 29 seats. If so, this means the LDP will lose 23 seats, leaving the LDP with its slimmest majority since 2012, but still comfortably above the 233 seats needed to retain an outright majority. PM Kishida plans to raise wages, fight inequality and introduce a new fiscal stimulus plan to boost the economy and defence later this month. 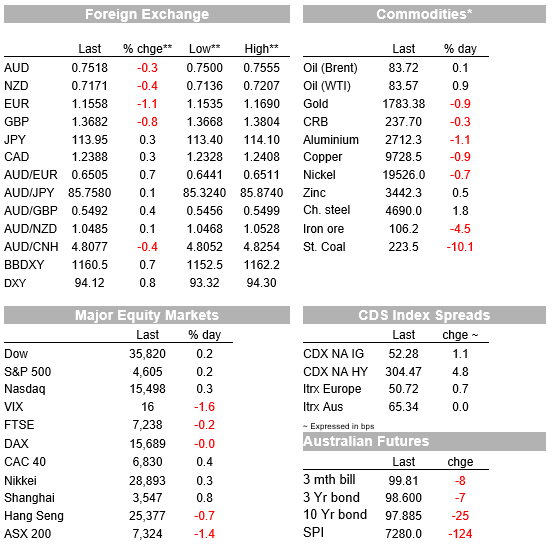