After what was a rocky week, market sentiment improved on Friday, with the S&P500 gaining more than 1% and the USD depreciating.  The NZD and AUD finished the week on a positive note, with the NZD closing around 0.6940 and the AUD around 0.7260.  In the week ahead, focus will turn to the all-important US nonfarm payrolls report on Friday.

It was a positive session on Friday for US equity markets, with decent gains across all the major indices (S&P500 +1.2%, NASDAQ +0.8%, Russell 2000 small cap index +1.7%).  Even after Friday’s rebound, the S&P500 was still down more than 2% on the week amidst investor worries about the potential hit to global growth from spiralling energy costs in Europe and China, which is helping to fuel an emerging stagflation narrative, and the recent hawkish tilts by the Fed and Bank of England.  Against this backdrop, energy stocks on the S&P500 have been the key outperformers (+3.3% on Friday and +5.8% on week) while Utilities, as big energy consumers, were the only sector in the red on Friday, albeit only slightly (-0.05%).

Helping to lift market sentiment on Friday was news from pharmaceutical company Merck that its Covid-19 treatment drug, molnupiravir, reduced the risk of hospitalization or death by 50% in phase 3 trials.  The drug, which is taken as a tablet, proved to be effective against all Covid variants, including delta, with US health expert Fauci describing the interim results as “very good news”.  The company said it intends to seek emergency-use authorisation from the FDA for its drug shortly and expects to produce 10 million courses of the drug this year.  To the extent that hospital (and ICU) capacity is a key constraint to countries removing (or needing to keep in place) Covid-related restrictions, the prospect of a drug that could potentially halve the risk of hospitalisation for those with mild or moderate symptoms would be a major positive.  Merck’s share price surged over 8% on the news with positive spill over into broader equity markets.

In economic data, the ISM manufacturing index was stronger than expected, at 61.1, one of its highest readings over the past 30 years.  New orders remained very high, at 66.7, while supply-chain issues were still prevalent with manufacturers reporting longer supplier delivery times and very elevated prices paid.  In Japan, the bellwether Tankan survey showed an unexpected increase in the large manufacturers index, up to 18 in Q3 from 14 in Q2, and its highest level since 2018.  Evidently, manufacturing activity remains very strong despite ongoing supply-chain issues and cost pressures.

On the inflation front, European headline CPI hit 3.4% y/y, its highest level since 2008, in part due to the recent surge in gas and energy prices in the region.  Core inflation, which hasn’t been above the ECB’s 2% target for almost 20 years, jumped to 1.9%, although there are question marks around how enduing this increase will be.  Key on that front will be what happens to wages, which ECB President Lagarde has said the ECB would “look very attentively” at.  Investors are watching how wage negotiations play out in Germany as unions lift their demands this year, including IG Metall, the biggest union in the country, which is looking for a 4.5% pay increase for its workers.  The European 10-year inflation swap hit its highest level since 2013 on Friday, at 1.91%.  The increase in European inflation expectations stands in contrast to the US market, where inflation breakevens have been rangebound for the past three months, albeit at much higher levels than in Europe.  The US Core PCE deflator, the Fed’s preferred inflation measure, was 3.6% y/y in August, matching its highest level since the early 1990s.

Despite this inflationary undercurrent, bond yields were lower on Friday, with the US 10-year rate dropping 3bps, to 1.46%, and European 10-year rates lower by 3-5bps.  The US 10-year rate, which hit a 3½ month high of 1.565% on Tuesday night, was essentially unchanged last week.

In currencies, the USD was broadly weaker amidst the improvement in wider risk appetite.  The BBDXY index was down 0.4% on Friday, paring its gain on the week to 0.6%.  The NOK was well out in front of other currencies, gaining 1.4%, with other commodity currencies performing strongly as well (NZD +0.7%, AUD +0.4%, CAD +0.3%).  The AUD ended Friday around 0.7260, essentially unchanged on the week while the NZD rebounded to 0.6950, some 1% lower over the course of the week.

The outperformance of commodity currencies on Friday came against a backdrop of firmer commodity prices, with thermal coal making a new record high of $203.20, breaking its 2008 record high, Singapore-listed iron ore futures gaining around 3%, and copper up by more than 2%.  Brent crude oil ended the week just below $80, near a three-year high, ahead of tonight’s OPEC+ meeting at which the cartel is expected to approve a further increase in supply in November.

The White House delayed a scheduled vote on the $550b bipartisan infrastructure bill on Friday amidst infighting in the Democrat party.  Biden will now aim to pass both the infrastructure bill and the larger spending package together, according to the FT, although the price tag on the latter will need to significantly come down from the original $3.5tn to win support among centrist Democrats, such as West Virginia senator Manchin (who said last week he could only support a package worth $1.5tn).  Meanwhile, the debt ceiling limit continues to approach with no sign of a compromise solution yet.  Treasury bills maturing in mid to late October are trading 5-7bps higher than surrounding months, reflecting the risk of late payment if the debt ceiling limit is not resolved in time.

The focus offshore this week is the nonfarm payrolls report on Friday night, with several high frequency indicators suggesting downside risks to the consensus of 470k jobs (one indicator even points to a negative print). Should payrolls disappoint, it might cast doubt around whether the Fed makes a taper announcement in November. Expect more headlines around Evergrande, with Bloomberg reporting that the company has guaranteed a USD bond that matures today, with any non-payment potentially leading to a cross default on Evergrande’s debt obligations.  Unlike Evergrande’s USD coupons, which have a 30-day grace period before an event of default is deeded to have occurred, there is no grace period for late payment on this maturity except for 5 days for administrative issues.  Across the ditch, on Wednesday the universal consensus is that the RBNZ will raise the OCR by 25bps, to 0.5%, and signal more hikes to come.  As of Friday, the market was pricing an almost 90% chance of a 25bps hike.  News yesterday that most of Waikato would enter a snap five-day lockdown, after the discovery of two new cases in the region, is unlikely to shake this consensus since the RBNZ has been clear that lockdowns won’t necessarily prevent rate hikes and an October hike has been strongly signalled.

Domestically, the RBA meeting tomorrow should be a non-event, with the focus in Australia on the planned reopening in NSW from October 11th. 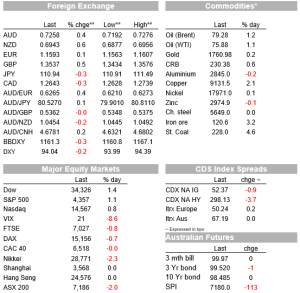 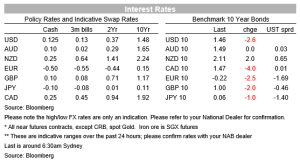