Overview All Mixed Up

The NASDAQ and S&P 500 have extended last week’s gains while the Dow and European equities start the new week with losses. A softer than expected US industrial production print weighed on the Dow while energy concerns and China’s growth outlook curb Europe’s enthusiasm. NZ and UK rates lead uptick in front end yields and the UST curve (twist) flattening continues with the 5s30s down 6bps to 85bps. The USD is little changed, NZD is a modest outperformer and the AUD is little changed.

The NASDQA (0.84%) and S&P 500 (0.34%) have extended last week gains while the Dow is down -0.10%. Big tech stocks have the led the gains with the NYSE FANG+ up close to 2% with a big miss in US industrial production weighing on the Dow.  US industrial production for September missed estimates of +0.2% m/m by a long way at -1.3%, with manufacturing output at -0.7% versus a +0.1% expected. The data is a reminder that although the US is less exposed to the energy crunch, supply bottle necks are still affecting its economy, particularly in sectors there is a shortage of workers, raw materials, and chips. US motor production fell 7.2 after a 3.2% slide in August. September was the sharpest drop since April.

Meanwhile in Europe, last week positive vibes have been somewhat forgotten with regional indices starting the new week with losses across the board. The Stoxx Europe 600 index fell 0.5% overnight reflecting concerns over China’s economic slowdown while energy supply issues remain a major concern.

Yesterday during our APAC session, China economic activity data for September and Q3 were mostly on the weaker side of expectations, with GDP growth of 4.9% y/y. The economy is struggling against a number of headwinds, including lockdown restrictions alongside its zero-tolerance for COVID19 outbreaks, a weaker property sector and the energy crunch which has seen widespread power cuts and factory closures. News that Beijing pushing ahead with plans for a property tax also weighed on sentiment yesterday.

Gas and Oil is Europe’s other worrywart. Oil prices printed another multiyear high during our session yesterday (Brent hit $86 per barrel and WTI almost at $84before easing during the overnight session (Brent now  -0.%7 @$84.26 and WTI 0.2% @$82.43). European gas prices had another rollercoaster ride, surging another 15% before falling back with oil prices drawing support given their substitute appeal. Bloomberg noted that Gazprom, Europe’s biggest supplier, doesn’t plan to send more gas via key transit routes through Ukraine next month and notwithstanding President Putin’s promise to do more, Russia will send only limited volume via Poland.

Meanwhile the oil supply story is not that much different with news overnight highlighting how OPEC and its allies fell to meet their output targets in September, reflecting the inability of some of its members to raise output to agreed volumes due to a lack of investment.

Against this supply driven inflationary backdrop front end yields have risen around the globe with UK and NZ rates leading the way . The NZ 2y rate climbed 4.2bps to 1.707% while 2y Gilts closed the day 13bps higher at 0.70%. Jason Wong, my BNZ colleague notes that a number of global investment banks have brought forward their call for UK rate hikes, now seeing a hike as soon as next month after BoE Governor Bailey said over the weekend that the central bank “will have to act” to prevent higher inflation expectations becoming more entrenched. The market is pricing over 100bps of hikes through the next year and the implied tightening is even greater allowing for the fact that the BoE has said that it would stop reinvesting bonds held under its QE programme once Bank Rate reaches 0.5%.

After reaching an overnight high of 1.6248%, 10y UST yields are now trading at 1.58%, little changed relative to Friday’s close,. After a small pause on Friday, the 30y UST Bond has reinitiated its decline, down another 2 bps to 2.02% with the net effect resulting in a continuation of the 5y30y curve flattening, down 6ps on the day and now at 86bps.

In contrast price action in FX land has been rather muted. The USD is little changed with both DXY and BBDXY still stuck close to the bottom of recent ranges. The AUD is also essentially unchanged at 0.7414, showing little reaction to the softer than expected China data yesterday.  Even more surprising GBP is down slightly to 1.3740 (-0.13%),  notwithstanding the repricing in the front end of the UK Gilts curves.

Meanwhile, NZD has been the best performer, up 0.24% to around 0.7090, a modest but explainable performance in the face of surging interest rates amid a much stronger than expected NZ Q3 inflation print. Annual headline inflation of 4.9% and an average of Statistics NZ core measures at 4.1%. The data provided further confirmation that monetary policy was excessively easy and the market rightly built in more rate hikes into the curve. The OIS market moved to price in a near-even chance of a 50bps increase in the OCR next month and built in about an extra 25bps hike by early next year.  An OCR of over 2% is now priced for the end of next year. 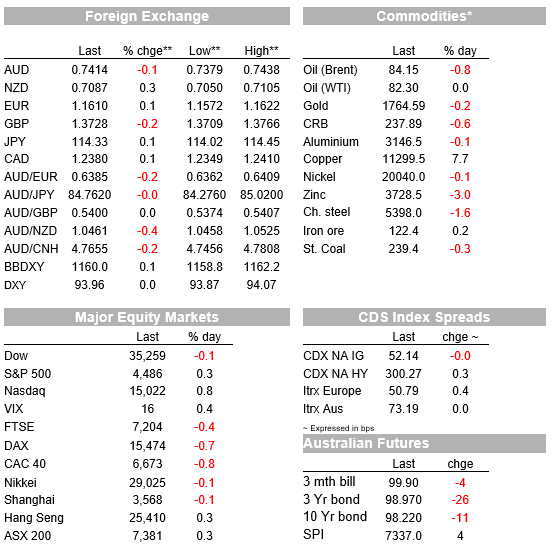 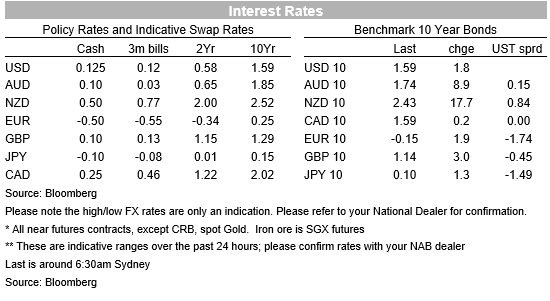