There’s been a swift move to bonds and safe haven currencies since the Fed’s message yesterday that it would take a couple of years at least for life to return to normal.

In trying to understand the forces driving US stock futures and share market indices across Asia lower – as well as a weaker AUD – some of us were talking ‘second waves’ regarding COVID-19 infection rates, quickly challenged by one of our colleagues across the Tasman who queried how you can talk of second waves when for many US States (and some big Emerging Market countries) there is no evidence that the initial infection waves had even begun to ease off.  We conceded the point. Certainly in the United States, ex-New York, case numbers remain high and are still accelerating in some states. Yesterday’s new infection numbers brought the total number of  US COVID19 cases to above two million, with a number of localised hotspots – 18 states are seeing an increase, including Arizona, Florida, Texas and parts of California. And globally, Wednesday’s new case load of 135,000 is the highest daily tally to date.

Whether the latest COVID-19 news is fanning concerns about fresh lockdowns with all that entails for economic activity, or (and perhaps more realistic, in the US at least) a more extended period of cautious consumer behaviour, it is doubtless a  factor behind the sharp falls in stocks where US indices have closed down 6.9% (Dow) 5.9% (S&P 500) and 5.3% (NASDAQ) following on from a 4.5% decline in the Eurostoxx 50.

Risk assets started sell off during Fed Chair Jay Powell’s post FOMC meeting press conference late on Wednesday, which contained some pretty dour messaging on how long economic recovery would take. He said he’s ‘not even thinking about thinking about’ raising rates and noted that the Fed has failed to hit its inflation target during 128 months of expansion pre-COVID19. The economic messaging weighed on the energy sector and the US yield curve flattening accompanying the ‘lower for even longer’ Fed mantra weighted on banks.  Financials (8%) and Energy (-9%) have been the worse two performing sectors in Thursday’s US session. Oil prices are off about $3.5 or 9%, not helped either by news from the EIA that US crude stockpiles had risen to 538 million barrels last week, according to Bloomberg the highest since 1982.

We should also add the scale of the recent equity market run-up and which by all accounts has been driven in large part by high participation from retail investors and which took some technical indicators such as Relative Strength Indices, off the charts . yesterday our chief AUD spot trader quoted someone describing himself as the world’s greatest day trader and who has offered some of his vast experience of trading stocks in recent weeks, to wit: “Buffett is an idiot….All I do is make money, this game is easy. Literally the easiest game I’ve ever played….All I do is print money”.  He followed this up with a quote from the venerable Jim Rogers that “A mania first carries out those that bet against it, and then those who bet with it”

Who knows whether this is just the ‘correction we had to have’ or the start of something more serious. Certainly though, we don’t doubt the ongoing power of central bank policy actions, from the Fed in particular, in continuing to place a floor under risk assets relative to the underlying economic fundamentals on which stock prices are supposed to be based.

The risk asset sell-off has inevitably been accompanied by some smart falls in benchmark bond yields, the US 10-year Treasury down 7bps to 0.65%, extending the dip from 0.80% to 0.72% in late NY trade on Wednesday.  We look to now be back into the middle of the 0.55-0.75% trading range that prevailed prior to last week’s sharp run up in yields globally and which saw the US 10-year as high as 0.95%.

It’s been very much a case of ‘the bigger they are the harder they fall’ with the AUD/USD down over 2% to around 0.6850 (it was above 0.7050 briefly on Wednesday afternoon in NY) and the more oil price sensitive NOK down over 3%. JPY (+0.25%) is the only G10 currency up against resurgent USD, where the Bloomberg BBDXY index is up 1.2% on the day. The EUR (-0.7%) and GBP (-1.1%) are in the middle of the pack, GBP failing to find much love from news that the UK government said it has agreed with the EU to an intensified timetable for negotiations on a free trade agreement, including weekly formal negotiating rounds.

On the data front

US initial jobless claims fell for the 10th consecutive week and were in line with market expectations at 1.54 million, though continuing claims at 20.9 million were almost a million higher than expected (20 million). US producer prices fell by 0.1% in ex-food and energy terms as expected to be 0.3% up on a year ago, down from 0.6% in April.

Nothing of note locally though NZ has the BusinessNZ May manufacturing PMI (last at 26.1)

Offshore this evening, there’s a UK date fest encompassing monthly GDP, industrial production, manufacturing production, construction output and trade figures (all for April and so all old news of course)

The US highlight is the preliminary June University of Michigan consumer sentiment survey, with sentiment seen improving to 75.0 from 72.3 (at its February, pre pandemic peak it was 101. 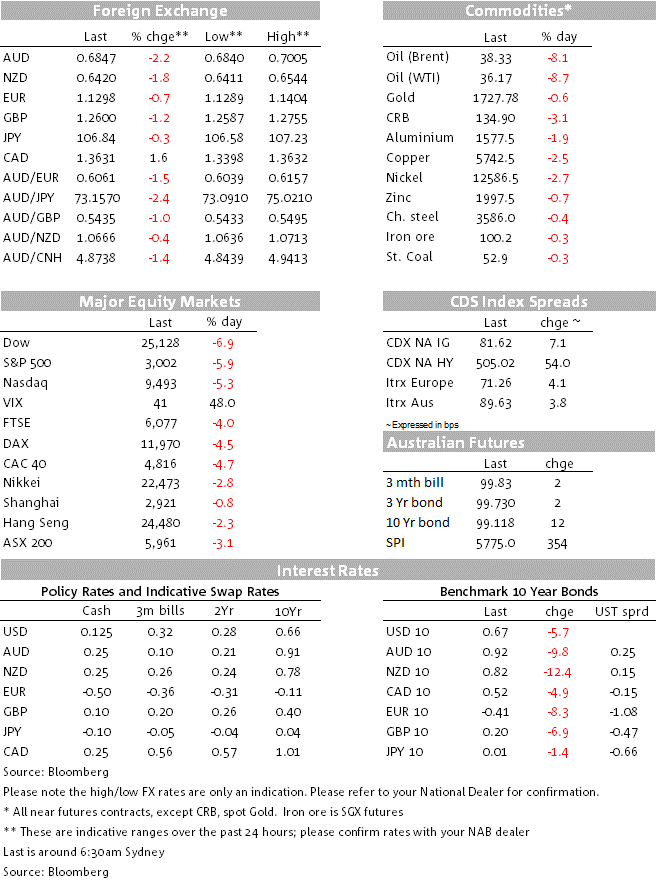