On another night when US Treasury yields continued to rise and in bear-steepening fashion, one might have expected to come in to find the USD firmer and stock market under pressure.  Far from it, in currencies at least, where the USD is flat to Friday’s New York close. And while the NASDAQ (-0.5%) and the broader defensive sectors have suffered under the weight of higher rates, this is as much to so with rotation back into cyclicals as higher risk free rates, evident in gains for the Dow Jones and Russell 2000. Within the S&Ps overall 0.3% fall, Energy (+3.4%) Financials (1.3%) Materials (0.8%) and Consumer Discretionaries (0.4%) have almost offset the downward pressure from falls in defensives and the highly interest rate sensitive technology sector. 10-year Treasuries hit a high of 1.51% before pulling back to 1.49%. Smaller rises seen across Europe.

Data wise, the only thing of note overnight has been August US Durable Goods Orders, up a bigger than expected 1.8% in headline terms led by orders for Boeing while core capital goods orders (non-defence ex-aircraft) were 0.5% against 0.4% expected, with July revised up from 0.3% to 0.6%. The trend here is very firmly up.

In what is a very busy week for Fed speakers, as is always the case post an FOMC meeting week, NY Fed President Williams and Fed Governor Brainard have both been out warning of the catastrophic consequences of failure by Congress to raise the debt ceiling, ahead of a Senate vote to take place later Monday that will always certainly fail to both raise the debt limit and avoid the risk of a government shutdown – the latter from this Friday when the government’s spending authority runs out after the Sept 30 fiscal year end. Doubtless Fed chair Powell and Treasury Secretary Yellen will have a lot more to say on this tonight when they both testify to a Senate banking committee.

On monetary policy matters, Williams’ comments looked to toe the party line, indicating that tapering QE may soon be warranted and that there is still a long way to go before reaching maximum sustainable employment, the condition for lift-off on rate hikes. Governor Brainard noted the uncertainty about the outlook. She said the impact of delta had been more disruptive than expected and could raise upside risks to inflation as supply constraints last longer, but overall she expected inflation to return to pre-virus dynamics. Chicago Fed President showed off his dovish credentials, worrying more that inflation might be too low in 2023 and 2024 than the possibility that inflation will be too high. In Q&A he told reporters he expected only one rate hike in 2023, followed by a very gentle incline.

In related Fed news, we have just heard that Dallas Fed President Bob Kaplan will step down on October 8, and earlier than Boston Fed President Eric Rosengren will retire at the end of this month. Both were called out in last week’s post-FOMC Powell Pres conference following revelations of active stock trading at the height of the pandemic  Of note here is that both Presidents have been seen to be at the hawkish end of the FOMC spectrum of late, with Rosengren due to rotate on to the FOMC voting roster in 2022.

Commodity currencies have been the outperformers in G10 FX led by AUD (+0.4%) then CAD (+0.2%), in the context of a USD which is overall little changed on where it went out in New York last Friday. GBP is also up +0.2% after what were construed as more hawkish comments from BoE Governor Andrew Bailey but which in reality seemed to be much less so as far as the near term outlook for BoE policy is concerned.  While re-iterating last week’s post-MPC meeting line that unwinding monetary stimulus should come via raising Bank Rate, that inflation was likely to rise to slightly above 4% and that underlying earnings growth was running at about 4%, Bailey went on to say monetary policy should not respond to supply shocks (‘monetary policy cannot boost the supply of chips or drivers’) and that tightening policy could hurt a weakening economy.

In truth, we would attribute AUD’s outperformance more to the revival of interest in the reflation/’living with covid’ re-opening trade, AUD having been the favoured whipping boy whenever doubts about the speed of global economic re-opening have risen to the surface in recent months. We also note that, notwithstanding the ongoing risks to commodity demand from the Evergrande saga and recent plunge in iron ore prices (since partially reversed) real time indicators of Australia’s terms of trade remain very close to record highs.

The main impact of higher Treasury yields on currencies has been to see USD/JPY make further upward progress, now banging against Y111.0 have pushed clear of the prior Y110.50 range top at the end of last week. Y111 will be a tough not to crack, bearing in mind the pair has spent only two days with time above this level so far this year (and with 10-year Treasury yield having been as high as 1.77%). The EUR has been little impacted by Sunday’s German federal election results, where week or months of negotiations lie ahead before a new Coalition government is formed. Most likely, but not certain, is a so called ‘traffic coalition’ of SPD (red), Greens and FDP (yellow), a combination which if confirmed is not seen leading to radical shifts in German economic or geopolitical polices (largely from the potentially offsetting influences of the left-leaning Greens and right-leaning FDP).

On commodities themselves, oil is the main mover (WTI +2%) while metals prices are narrowly mixed. Oil appears to be being sucked up in the draft of natural gas prices, the latter surging to a fresh seven-year high. Bloomberg cite the expiration of October options as adding momentum to a rally fuelled by escalating concerns about tight winter supplies. They say traders were closing out bearish positions ahead of the expiration of October options and futures this week. 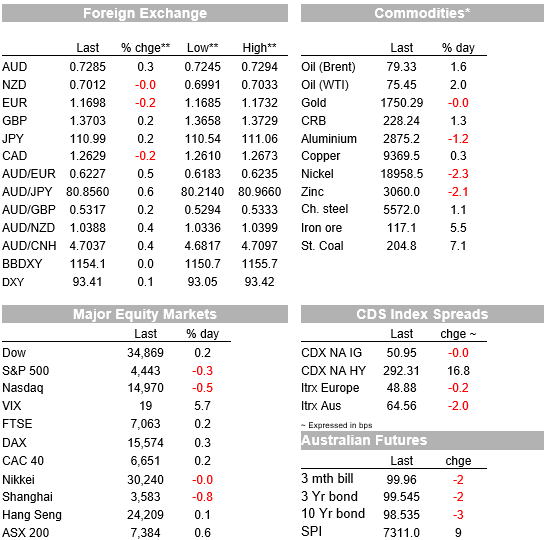