The RBA is focused on data not dates, says NAB’s Rodrigo Catril in today’s Morning Call. It’s data from the US and Germany that’s added caution to markets overnight, along with rising concerns about China.

No matter what you do I’m gonna take you down

US and European equities have ended the overnight session with losses across the board, although the NASDAQ is one exception recording a modest gain. Risk aversion is the theme but without a single catalyst as a culprit. Data has been softer than expected, turmoil in oil markets and China’s crackdown on publicly traded companies have not helped either while the move down in 10y UST yields is an additional consideration. The USD and JPY have benefited from a safe haven bid while the AUD and NZD have reversed yesterday’s gains.

After enjoying a holiday on Monday, US equity investors have begun their new trading week with a cautious tone amid several themes playing increasing in uncertainty. The S&P 500 has closed the Tuesday session down -0.20%, ending a seven-day winning streak. A look at the index’s sector performance reveals a preference for defensive stocks with Real Estate, Utilities, IT and Consumer Discretionary showing gains while cyclical sectors are all in the red. Energy -3.5%, Materials (-1.44%) and Financials (-1.55%). Meanwhile in Europe all major regional indices ended the day with loses between 0.8% to just under 1%. The Stoxx Europe 600 Index fell 0.5%, erasing initial gains of around 0.2%, like in the US cyclical sectors led the decline.

On major cause for the cautious tone in markets can be attributed to the softens in key US and German data releases. The US ISM Services index fell by more than expected in June to 60.1 from a record high level of 64.0 the previous month . Normally any ISM reading approaching 60 or above would be seen as strong, but there’s no denying something of  lower print in June running a little counter to the re-opened narrative for the US economy and its higher vaccination rate. Looking across the various components of the index, there were declines in all but the backlog of orders (labour supply issues? shortages of product?). Prices paid remained high at 79.5 from 80.6, but business activity down to 60.4 from 66.2, the softest since February this year (pre-opening in earnest) while employment dipped back below 50 to 49.3, the lowest since December, playing also to the (lack of) availability of labour issue.  Not an alarming report, but details play to the idea that there is a speed limit to the recovery (amid shortage of inputs and labour) alongside still elevated costs.

In a similar line, Germany’s factory orders unexpectedly slumped 3.7% m/m in May, driven by a 6.7% drop in foreign orders, with domestic orders up 0.9%. Disruptions in the auto sector from chip shortages look to have played a role in the data.

Another reason for cautiousness came from China with the country’s State Council releasing a statement yesterday signalling a clampdown on company data and offshore listings . China will apparently step up its regulatory oversight of companies trading in offshore markets and publicly traded firms will be held accountable for keeping their data secure. The move followed the listing of Didi in the US (China’s version of Uber), seeing its share price slump over 25% in the past couple of days. Investors will increasingly take a more cautious view when investing in Chinese companies.
Oil market dynamics have also played into the cautiousness in the air .  Yesterday news of a breakdown in OPEC+ talks  initially  triggered a rise in oil prices with Brent crude reaching an intraday high of $77.84 a barrel, but then as the market took a bit more time to assess the consequences of the collapse in the negotiation,  the conclusion is that the breakdown of talks could ultimately result in higher oil supplies. Brent ow trades at $74.83 while WTI is at $73.70.

Moving onto the US Treasury markets reaction to all the above-mentioned dynamics has triggered a bull flattening of the curve with the 10y Note leading the decline. Yesterday during our day, the 10y Note was trading at 1.44%, but the decline in Bunds following the release of Germany’s factory orders started a decline which was later exacerbated by the ISM release. 10y UST yields now trade at 1.3481%, a level not seen since late February this year. Notably as well, the 7.5bps decline over the past 24 hours has been led by a move lower in real yields ( -6bps) with only a small decline in breakeven (1.5bps to 2.33%).

The USD and JPY have benefited from safe haven demand with DXY and BBDXY USD indices up between 0.35% to 0.4% while USD/JPY is down 0.31% to ¥110.63. Yesterday the AUD almost touched 76c (0.7599) following RBA policy statement and commentary from Governor Lowe. The Bank didn’t extend yield curve control beyond the April 2024 bond and signalled a tapering of QE to $4b per week from $5b per week and more flexibility in that policy with another review in November. Forward guidance on future rate hikes was tweaked, with the Bank opening the door for upside scenarios to bring forward expected rate hikes earlier than 2024.

Furthermore, Governor Lowe downplayed wages as a factor that might drive policy decisions, highlighting that CPI inflation was more important. The market read the commentary on the hawkish side. With the real economy in no obvious need of emergency policy settings, a rogue CPI print or two could easily bring into view a policy tightening as soon as next year. Australian 3-year bond futures moved as much as 5bps after the announcement (implied yields higher), but that move has reversed overnight. The 10 year bond future is down about 6bps in yield terms from the NZ close, reflecting the move in Treasuries.

The risk off tone overnight has resulted in a complete reversal of the AUD gains post the RBA with the pair now languishing just below 75c at 0.7495. A similar pattern can be seen on NZD price action over the past 24 hours, the fall in risk appetite has trumped the bringing forward of RBNZ rate hike expectations, seeing the NZD trade a wide range of 0.6990-0.7104 overnight. Now at 0.7011.

Yesterday the NZ’s QSBO highlighted how overheated the NZ economy was , with record shortages in finding labour and massive jumps in cost and inflation indicators. A net 50% of retailers said that they had increased prices in Q2 and a net 64% expect to raise prices further. Along with the wealth of other economic data along similar lines, we brought forward our expectations for the first rate hike this cycle to November this year. Next week’s RBNZ policy review will be revealing. 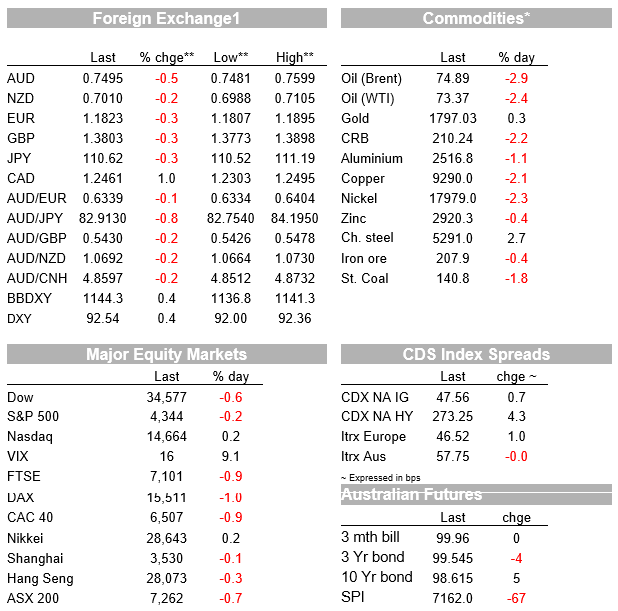 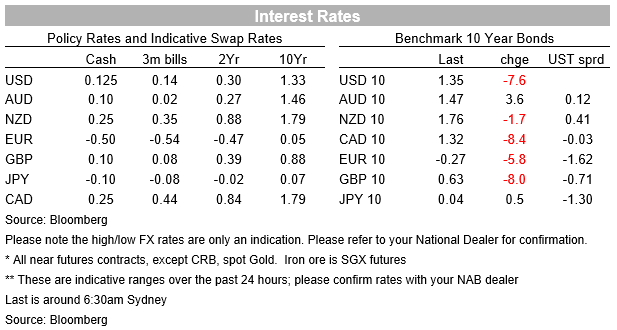