It was an early start to month-end on Friday, with the US and UK off on holiday today.

Lights will guide you home, And ignite your bones, And I will try to fix you – Coldplay

Intraday currency volatility was the standout feature of Friday’s financial markets. Month-end US dollar demand ahead of today’s May 31st US and UK holiday was palpable across all G10 currencies, but the USD gave back most of its earlier gains once the London 4pm fixing window closed. A heavy US data slate, including a rise in the core PCE deflator to above 3%, failed to make much impression on bond markets where US Treasury yields ended the data slightly lower, not too on equities where US indices finished Friday with very minor gains.

In the lead up to and during the 4pm London fix on Friday, every G10 currency weakened against the US, including falls of more than half a cent for the EUR, GBP and AUD (the latter to a low of 0.7677). Friday was effectively month-end for many given today’s US and UK public and market holidays. Quite why month-end demand or US dollar was as strong as it evidently was is not abundantly clear, though strong gains for all European stock indices this month, averaging 4-5% in contrast to US stocks and where the NASDAQ is off 1.5% MTD, will likely have necessitated fund manager sales of EUR, GBP, CHF, to maintain currency hedge ratios.

The recovery in all G10 currencies in afternoon New York trade – in full in the case of EUR/USD and almost fully in case of most other major currencies – was testament to the month-end specific nature of earlier losses, all the more so in so far as there wasn’t much going on in other asset classes to influence currency sentiment and flows earlier in the day.

That said, AUD/USD only recovered to 0.7712 so still off almost 0.5% on a day when commodity prices were mostly stronger – e.g. for all industrial  metals and gold – and risk sentiment was steady at elevated levels. The ‘down day’ (-0.45%) and week (-0.26%)  also came during a period where the Chinese Yuan continues to rise, USD/CNY some 1% lower on the week and to now well below the psychologically important 6.40 level, boosting Asian Emerging Market currencies in its wake (the ADXY index rose by 0.8% on the week). This further underscores Aussie’s fundamental undervaluation at current levels, which in terms of NAB’s short term fair value model now sits above 81 cents. Perhaps once the calendar turns over to June and we end what has historically been a month when the Aussie more often falls than falls, we will start to see more positive price action.

On the week, it was a very flat one for the USD in index turns, while the G10 scoreboard was topped and tailed by the NZD (+1%) and JPY (+0.8%), the former on the RBNZ’s signalling of rate rises next year in its Monetary Policy statement, and the JPY weak despite the fact US Treasury yields were actually slightly lower. Japan did announce an extension of its state of emergency and so related restrictions through June 20, so 5 weeks before the Olympics, but whether this is influencing the Yen or not is hard to say.

The highlight of a heavy calendar of US economic releases was the April core PCE deflator which rose to 3.1% from 1.9%, its highest annual rate since 1992 and a little above the 2.9% expected. The 0.7% monthly rise was below the equivalent CPI increase (0.9%) primarily because used care prices – up 10% last month  – have a smaller weight than in the CPI. Recall it was used car prices, airline fares and hotel room cost that were the biggest sources of the jump in CPI last month, and now too PCE deflators. Looking to the May numbers coming out in in June, there may still be base effects that will further boost annual CPI inflation (May 2020 core CPI was -0.1%) though perhaps less so or not at all for the PCE deflators (core was +0.2% last May). On the comforting side, and doubtless something Fed official will be playing up, 5-10 year inflation expectations in the final University of Michigan Consumer Sentiment Index came down to 3.0% from 3.1% in the preliminary release.

US Personal Incomes fell by a whopping 13.1% in April, but this was simply because the majority of the $1,400 covid stimulus cheques were paid in March stimulus. Personal spending in real terms was a bit softer than expected at -0.1% against the +0.2% consensus.  The Advance April goods trade deficit shrinking o $85.2bn from $90.6bn, well below the 92.0bn expected, on a combination of stronger capital goods exports and a modest fall in imports. Whether or not this is sustainable is unclear, but if it is, it will boost Q2 GDP.

Earlier Friday In Europe, European Commission May Eurozone confidence surveys showed either as or better than expected improvements in Economic Confidence (114.5 from 110.3) Industrial Confidence (11.5 from 2.1) and Services Confidence 11.3 from 2.1).

President Biden outlined his Budget plan for FY22, proposing $6 trillion of spending that would significantly boost discretionary spending and sharply raise taxes on corporates and high-income households (the Budget includes both his infrastructure-heavy American Jobs Plan and his American Families Plan the centre piece of which is the provision of pre-school kindergarten and paid parental and sick leave, all aimed at allowing greater labour force participation, by females especially. The proposed FY2022 fiscal deficit would be 7.8% of GDP, down from the current fiscal year estimate of 16.7%, which includes the substantial pandemic stimulus packages. The Budget will face some opposition in Congress, and it remains to be seen what the final outcome will look like, but suffice to say that the US economy will face a period of high fiscal deficits and rising debt levels for the foreseeable future, ensuring that twin deficit’ risk for the USD will remain  a feature of the market landscape for years to come.

In the bond market, Friday’s 3%+ US PCE deflator data didn’t do any harm to Treasuries where the 10-yar yield actually fell by 1bp to back just below 1.60%. The market was seemingly well-braced for this outcome after the spike in CPI earlier this month. European benchmark bond yields were also 1-2bps lower on Friday, the much bigger move coming in Australian government bonds where the implied yield on 10-year futures rose by 6bp to 1.63%. This after the brief flirtation with a negative AU-US yield gap earlier in the week, which evidently is not deemed sustainable.

US equities were in the green for most of Friday but gave back all their intra-day gains during the last ‘hour of power’ and in front of the three day weekend, reducing the one day gains to less than 0.1% for both the S&P00 and NASDAQ. The late NY day sell-off meant that European stocks had a more positive end to the week, e.g. the Euro Stoxx 50 index ending 0.78% higher (to be currently 3.9% up on the month).

Finally in commodities it was a positive day for most hard commodities – including almost all base metals and gold, though iron ore futures slipped by 0.3% and oil lost about 50 cents. A very positive week overall though including a 4% rise in the LMEX index of base metals while steaming coal and WTI crude were both up by more than 4%. 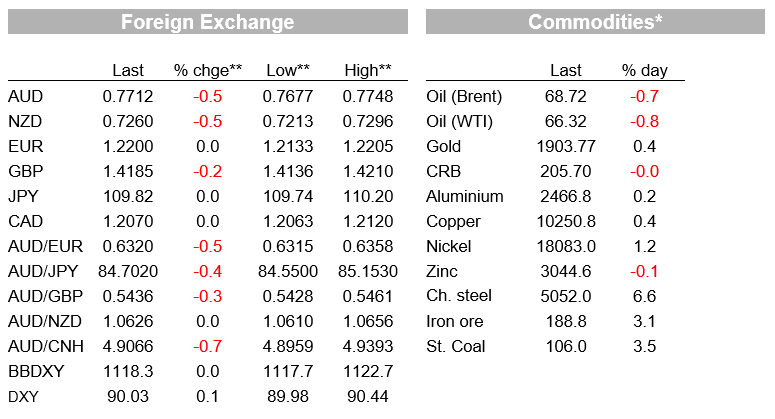 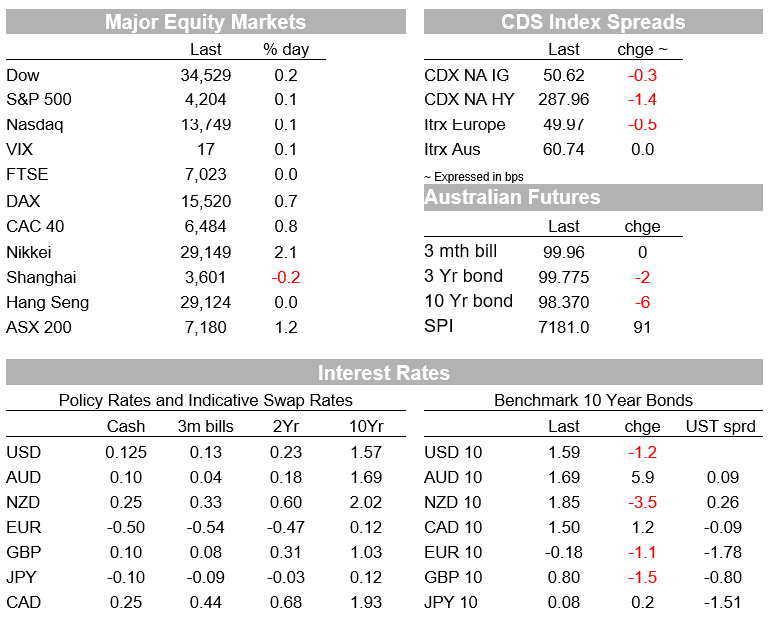