Overview Bang A Gong (Get It On)

Judging from the market reactions across bond, currencies and equities, we can conclude that Mr. Market did a remarkably good job of correctly anticipating what would be revealed out of the latest FOMC meeting, and that the Fed’s communication strategy deserves to be applauded, all the more so given some wildly differing views evident in the public utterances of Fed official in recent months. The S&P500 ends the day up 1%, almost exactly where it was pre-Fed, The DXY USD index is 0.2% up on pre-Fed levels and 10 year Treasury yields are about one basis point lower at 1.305%.  The 5/30yr Treasury cure is some 7bps flatter at 96.5bps, its flattest in well over a year. Stronger commodity prices have shielded commodity currencies (CAD, NOK, AUD) somewhat from mild USD strength, AUD/USD currently sitting not too far from where Australia left it last evening.

Going into the FOMC, the market’s antennas were most acutely attuned to what the 2022 ‘dot plot’ would show relative to June, whether the Statement itself or if not the ensuing press conference from chair Powell would tee up a formal announcement of whether QE was likely to commence, and also what, for the first time, the ‘dots’ would reveal for 2024.

In the Statement, the killer passage was that “the economy has made progress toward these (‘substantial further progress’) goals. If progress continues broadly as expected, the Committee judges that a moderation in the pace of asset purchases may soon be warranted”.  In the press conference and referencing the next (9 October) employment report, Powell said that “a reasonably good jobs report” would meet the taper test and that “I guess you could say the test on employment is all but met’.  Nothing specific on the expected pace of tapering, but in saying that tapering could conclude around mid-2022, then consensus expectations going into the FOMC for something in the order of a $15bn per month taper pace, most likely commencing in December an ending by July 2023, is not going to be moved by Powell’s comments.

The biggest market reactions since the local market shut shop yesterday have been in commodities, but these pre-date the Fed announcements. On the Singapore futures exchange, iron ore had recovered to around $100 at 4pm AEST Wednesday and is currently near $110, while both WTI and Brent crudes are up +/- $1.50. Helping here has been the latest IEA inventory report showing crude inventories falling last week to their lowest since October 2018. Base metals are smartly higher, both copper and aluminium by more than 3%. So for now, fears that Evergrande, and perhaps other China property developers’ woes will see sharply reduced demand for home building commodities (and where Australia would be most directly impacted) look to have eased somewhat.

Commodity price gains have helped CAD, AUD and NOK sit at the top of the G10 FX scoreboard  though all have given back a little of their pre-Fed gains in the context of the DXY index lifting from around 93.20 to 93.40 post-Fed. The JPY is the worst performing currency – nothing to do with the unchanged BoJ yesterday – but sill trading shy of Y110, while both the EUR and GBP are weaker, the latter in front of the BoE tonight and where there are now some doubts about whether they will continue to impart a hawkish time given latest UK economic developments (including the impact of tax rises yet to be felt – see Coming Up below).

Certainly yesterday’s news that some (unspecified) arrangement has been agreed between Evergrande and owners of a domestic bond on which coupon payments were due today had been reached, helped foster a view Evergrande is not going to be allowed to collapse in a heap, albeit the fate of the interest payments due on a US dollar bond today totalling about $83mn remains unknown. On the latter, Evergrande’s foreign bonds had been trading at around 30 cents in the dollar, so a lot is already discounted here regarding likely debt restructuring including (very) substantial haircuts. Large scale PBoC liquidity injections, adding around CNY100bn more than needed to meet maturities, also went some way toward allaying contagion fears from the property sector to broader Chinese markets.

In other overnight news, US existing home sales fell by 2% in August, in line with market expectations. Supply conditions remained tight, with only 2.6 months of supply at that sales rate and houses were only taking an average 17 days to sell compared to 22 days a year ago. Eurozone consumer confidence unexpectedly rose in September, running near the top of its historical range, perhaps driven by an easing of COVID19 restrictions. 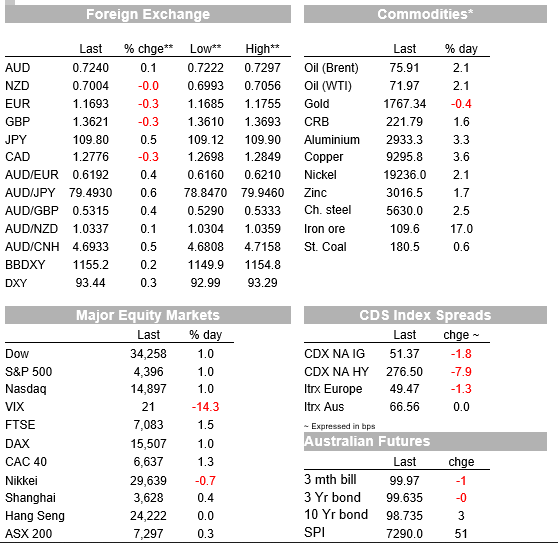 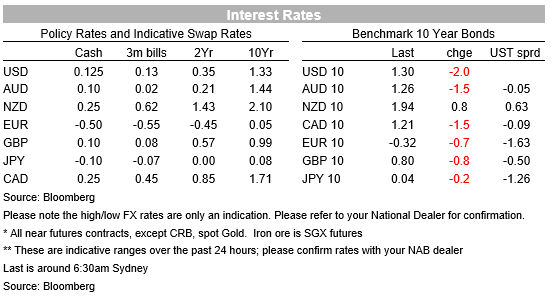