Oil is the standout mover, Brent +$4.50 and WTI crude +$4.60 on reports Saudi Arabia won’t be pumping any more oil

US stocks are down the best part of 1% following gains of +/-1% in Europe, despite comfortable beats on both revenue and profits from Goldman Sachs (Bank of America less so). Apple’s plans to slow hiring plans ahead of an ‘impending economic downturn’ are partly responsible, its stock down over 2%. This ahead of Netflix’ s earnings after Tuesday’s NYSE close. IBM has just reported and comfortably beaten its Q2 revenue estimate. Elsewhere, the USD is weaker across the board for no obvious ‘new news’ reason save perhaps that oil is up +/-5% after reports President Biden’s visit to Saudi Arabia in the hope of persuading the kingdom to pump more oil has fallen on deaf ears. AUD/USD is off its o/n highs but holding on to the 0.68 handle it recaptured during our time zone yesterday.  Benchmark bond yields are higher, in the US by 4-6bps.

Economic news has been limited since local markets left off yesterday and where the key release during our time zone was of course the NZ Q2 CPI, showing headline up to 7.3% from 6.9% against 7.1% expected and the RBNZ’s preferred ‘sectoral factor model’ estimate up to 4.8% from an upward revised 4.6% (from 4.2%) in Q1. The main data overnight has been the US NAHB (Homebuilders) survey which at 55 down from 67 (65 expected) is the weakest since 2015 if we ex-out the temporary crunch lower at the start of the pandemic. This is ahead of US Housing Starts tonight (see Coming Up below).

Looking across all markets, oil is the standout mover, Brent +$4.50 and WTI crude +$4.60 on reports Saudi Arabia won’t be pumping any more oil than otherwise following US President Biden’s visit. Oil is up much more than gas prices into the European market, where the TTF Netherlands benchmark is up less than 1% ahead of Thursday’s scheduled end to the NordStream 1 pipeline maintenance (but which could conceivably be delayed by a few days given the delay in transporting the now-fabled gas turbine from Canada to Germany).

Of note here is the story that Gazprom has declared a force majeure on at least three of its European gas buyers and including Germany. This may be ‘past tense’ in so far it relates to a period from around 14 June up to when NordStream 1 was shut down for a two-week annual maintenance on 11 July, when we know flows dropped by some 60%. Cold comfort though, and where we continue to find no strong reason why Russian President Putin will not be seen to be weaponising gas supplies into the EU, the only real question whether it is as early as this month or not until later in the year.

Latest covid-related news out of China remain discouraging , with new cases in Shanghai sitting above 500 on Sunday (519) after Saturday’s 580 and mass-testing occurring in nine districts as the financial hub seeks to stamp out infections. Meanwhile the gaming enclave of Macau extended its lockdown. There is some (ex-covid) positive news though, with reports late yesterday that the authorities were to sanction the growing consumer boycott on mortgage payments on uncompleted homes and urges (compel?) banks to increase lending to developers so they can complete unfinished housing projects. What this means for mounting debt problems in China down the road, already showing up in runs on smaller banks, is another matter of course.

Central bank speak has been (mercifully) thin on the ground so far this week, one exception being outgoing Bank of England MPC member (and hawk) Michael Saunders , who says in his view it is not unlikely that rates will rise to 2% or above (currently 1.25% after 5 hikes). He reminds us that his preference has been to tighten relatively quickly and rein in inflation expectations by ‘leaning into’ the risks, and also that that the UK has capacity issues from low workforce growth and demographic challenges (meaning low growth potential). The 2% or above call is hardly big news though with money markets already priced for just over 100bps of rises to Bank Rate over the next (August and September) meetings.

Meanwhile in the UK Tory party leadership context, as expected Tom Tugendhat has been  eliminated. That leaves Sunak (115 votes), Mordaunt (82), Truss (71) and Badenoch (58). Another one will drop out Tuesday, then another on Wednesday, leaving the final two, who will battle it out over the month of August, before some 200k Conservative Party members decide who will be leader and PM on or before 5 Sep.

Finally in FX the DXY USD index is down 0.6% and the broader Bloomberg BBDXY -0.4% (the former thanks largely to  0.6% rise in EUR/USD). GBP is top of the G10 leader board for no obvious reason, while NOK and CAD have outpaced gains for the AUD (+0.3) and NZD is softer (-0.2%) and where the oil price jump would seem to account for their outperformance. 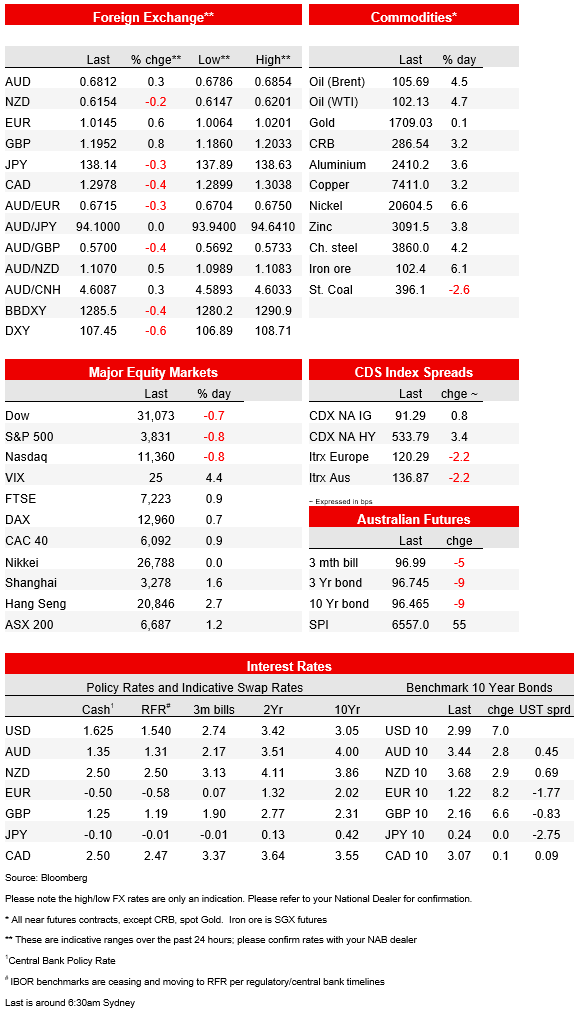 Markets Today: US jobs market too hot for the Fed?