Markets Today: PMIs to help show shape of the recovery

In a day that’s been light on news, markets have had a chance to take a more positive outlook, pushing equities higher and the US dollar lower.

Overview: Into the great wide open

Into the great wide open, Under them skies of blue

Out in the great wide open, A rebel without a clue –  Tom Petty & the Heartbreakers

After a soft opening, US equities recovered ending the day in positive territory. Tech stocks have led the charge with bad US virus news only a small temporary headwind before the close. UST yields are little changed and the USD is weaker across the board with NZD and AUD among the outperformers.

After a soft lead from Asia and a negative European open, US equities opened the new week with a negative tone, which saw the S&P 500 fall 0.60% in the first hour of trading. The downward move lost momentum shortly after with tech stocks leading the recovery. The NASDAQ index posted its seventh straight day of gains (+1.11%) with Adobe, Amazon.com and Square trading at all-time highs. The S&P 500 closed 0.65% and the Dow was 0.59%.

Late in the session

US investors were briefly spooked by comments from Texas Governor Greg Abbott noting the virus was spreading at unacceptable rate in the state. For now, however, investors remain focused on the states re opening strategies with monitors such as restaurant diners tracked by OpenTable and mobility track by Apple all pointing to an increase in US economic activity. Investors continue to see a high bar for the re-introduction of containment measures while White House economic advisor Larry Kudlow told CNBC on Monday that a “second wave” of coronavirus cases isn’t coming and that lawmakers will likely develop another stimulus package by the end of next month.

Wirecard shenanigan played a big factor for the sombre mood evident in the negative returns across main regional indices. Overnight, the German Company announced that €1.9bn that it had reported as assets probably don’t exist, deepening a scandal that has wiped out more than 80% of its market value in three trading days. The STX Europe 600 index closed the day down 0.76%.

The improvement in risk appetite evident in US equity markets has yet again been the big influence in currencies with the USD weaker across the board while risk sensitive currencies, such NZD and AUD have outperformed. After recording four consecutive days of gains, both the DXY and BBDXY indices have started the new week with negative returns. BBDXY is down 0.5% and DXY is -0.60% and now trading at 97.04.

The dire virus statistics over the weekend weighed on both the AUD and NZD at the open yesterday, but as it has been the case since the COVID-19 crisis began, both antipodean currencies continue to track the path of the S&P 500 futures. Early yesterday the AUD traded down to a low of 0.6805, but as the S&P 500 futures staged a recovery, the AUD began its ascendency trading to an overnight high of 0.6922, before settling at 0.6908 where it currently trades. The NZD followed a similar path, trading to a low of 0.6377 early yesterday morning, a high of 0.6494 a few hours ago and now it trades at 0.6480.

Global rates continue to show little of the optimism being reflected in equity markets.  There has been little change in US Treasury yields overnight, with the 10-year yield still sitting around 0.7%.  European government bond yields fell after German Finance Minister Scholz suggested that the government and the ECB were close to reaching a solution that would satisfy the German constitutional court and allow the Bundesbank to continue participating in the ECB’s QE programme.   Germany’s 10-year yield fell by 2bps, to -0.44%, while Italy’s 10-year yield fell 7bps to 1.29%, its lowest level since late-March.

New Bank of Canada Governor Tiff Macklem sounded a cautious tone in his first speech as Governor.  Macklem said “the recovery will likely be prolonged and bumpy, with the potential for setbacks along the way”, adding that it will be a “very long period” before the Bank would consider removing stimulus. Macklem said the policy rate in Canada was now at its effective lower bound (0.25%) and the Bank thought negative rates would lead to distortions. The CAD underperformed other commodity currencies overnight, rising a more modest 0.6% against the USD.

Oil prices have began the new week on a positive note with both Brent and WTI up 1.9% and gold is up 0.6% after testing a 7 year high. Ion ore was among the underperformers, down 1.3%. 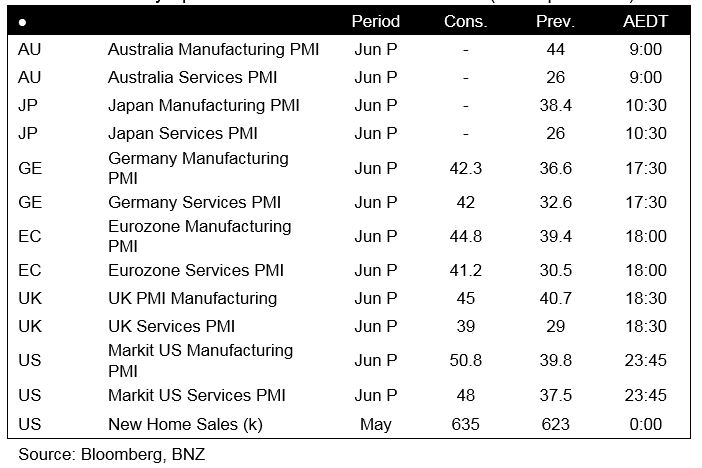 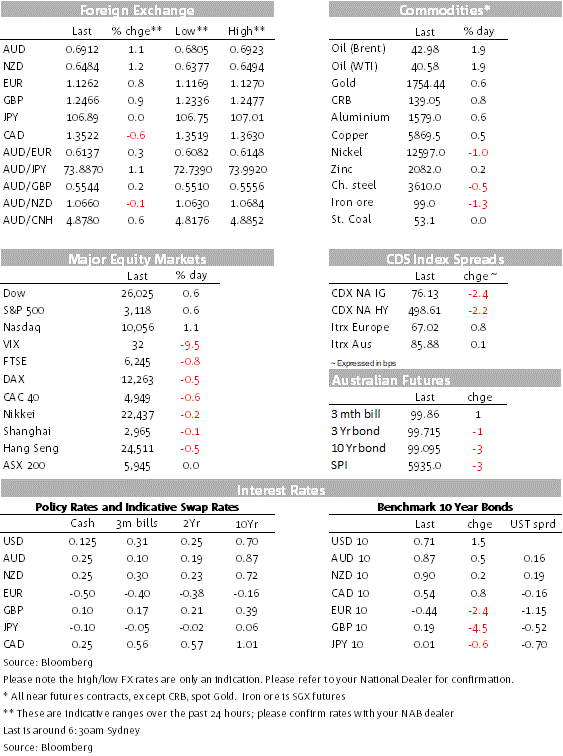