Markets Today: RBNZ talks it up, Europe talks it down

The RBNZ surprised many yesterday by indicating there could be an interest rate rise as soon as next year.

The overnight news flow has been light and equity markets are little changed. US equities closed in positive territory, reversing yesterday’s small losses while equities in Europe closed marginally in the red. After yesterday’s push up in NZ yields and the Kiwi, following a hawkish surprised by the RBNZ, a stronger USD overnight sees NZD lose some of its post-MPS gains. USD strength has been led by a pulldown on the euro amid ECB pushback on PEPP trimming. AUD is little changed.

The S&P 500 has closed the day up 0.19%, effectively reversing yesterday’s losses. A look at the index components shows cyclical sectors have led the gains with Energy and Consumer Discretionary up just under 1% with  Health Care (-0.56%) and Consumer Staples (-0.18%) the main underperformers.

Earlier in the session, European equities closed marginally in the red with mixed sectors performance. All major regional indices closed down between 0.1% and 0.2% with the Stoxx 600 was flat on the day. Retail and travel sectors gained on the day (over 1%) with Banks the underperformers (-1.1%) dragged down by Swedish lenders on the prospect of a new tax for banks to cover the costs of the pandemic.

Core yields are showing a contrasting dynamic.Longer dated UST yields have edged a little bit higher with the 10y Note up 2bps to 1.57% while the 30y Bond is up 1.5bps to  2.257%. Both key benchmark yields are currently trading close to their recent range lows. Meanwhile core yields in Europe have edged a little bit lower with both 10y German Bunds and Italian BTPS down ~4bps to -0.203% and 0.919% respectively.

10y Bunds are now down over 13bps in the past week as the market adjusts its view on the June ECB meeting. Expectations of a June tapering of bond purchases have been quashed as a few voting board members hose that view down.

Late yesterday ECB executive board member Panetta was the latest to join the dovish choir noting that “the conditions that we see today do not justify reducing the pace of purchases”, adding that he wanted to see a sustained increase in inflation pressures before tapering purchases . The latter comment has been interpreted as a significant departure from previous ECB guidance. In its last policy Statement the ECB noted that the Pandemic Emergency Purchase Programme (PEPP) was originally proposed to continue until at least the end of March 2022 and until it judges that the coronavirus crisis phase is over, so not specifically tied to inflation.

Panetta’s comments follow dovish comments by the Greek and French central bank governors and those of ECB President Lagarde at the end of last week, saying it was “far too early, and its actually unnecessary to debate longer-term issues”. The growing ECB voices pushing back on PEPP tapering expectation seems to reflect a high degree of sensitivity to the recent rise in EU yields and the Euro. But of course, the price action is also a reflection of the improvement in economic activity and success of vaccine roll out programmes. Setting the scene for a live policy discussion at the June policy meeting. See here form more on this topic from NAB’s Gavin Friend.

The move lower in EU yields following Panetta’s comments has been the main catalyst for the move lower in the Euro, down 0.47% to 1.2192%. SEK underperformance ( -0.66%) can also be attribute to the news over the potential of a new tax on banks.

Weakness in European currencies lifted the USD with reports also noting the broad USD strength has been helped by some earlier than usual month-end demand into the London 4pm fix, given the US and UK holiday on Monday.

USD gains have taken the edge off NZD strength seen after the RBNZ’s MPS . Yesterday NZ bonds and the Kiwi were centre stage after the RBNZ MPS. As widely expected, the RBNZ left all its policy settings unchanged and incorporated the stronger global backdrop, much stronger NZ labour market, easier fiscal policy from last week’s Budget and the higher inflationary pressure that is clearly evident.  All this made the Bank more confident in its forecasts such that it was prepared to re-publish an OCR track spanning the forecast period.

That said, the RBNZ surprised the market by re-introducing its forecasts for their Official Cash Rate (held steady at 0.25%) into their Monetary Policy statement, OCR forecasts pointing to a sequence of hikes from the third quarter of next year. The move to an implied tightening bias triggered a >1% rise in the NZD, reaching an overnight high of 0.7316 , NZD currently trades at 0.7282. Jason Wong, my BNZ colleague notes the 0.7315 level has been a previous level of resistance, back in January, so now it is back on the radar, ahead of the next resistance level at February’s high of 0.7465.

The move up in the kiwi helped the AUD trade to an overnight high of 0.7796, but the USD strength that followed has brought the AUD back down to 0.7743, essentially little changed over the past 24 hours.

The only other notable thing to note on currencies is USD/CNY breaking below 6.40 yesterday , after the PBoC’s reference rate fix didn’t imply any discomfort with CNY’s recent strength. USD/CNY went below 6.39 last night and has just settled above that figure. 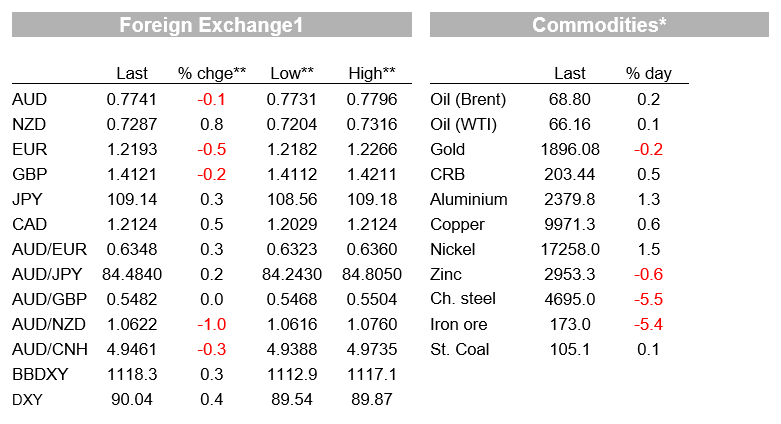 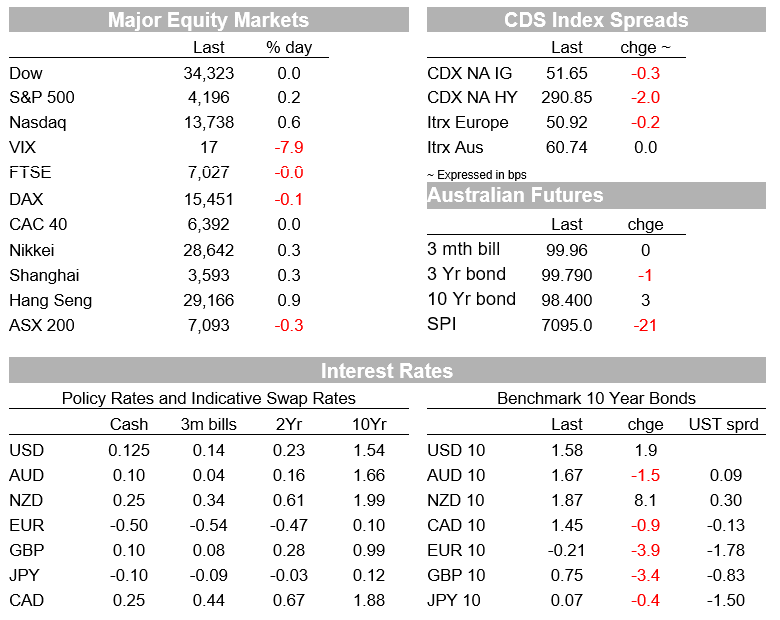 Markets Today: Heading for a choppy end to Q2

In month-on-month terms, our NAB Online Retail Sales Index contracted again in May.

Markets Today: Heading for a choppy end to Q2

US equity markets have begun the new week on the back foot with a clear lack of conviction.

The ongoing disruption of the pandemic and Russia and Ukraine conflict have highlighted the need for a different approach to global logistics.

It was a great day for US stocks on Friday, with two-thirds of the mid-month sell-off now retraced.