Markets Today: Signs of a China bounce-back adds to optimism

“Get to know the feeling of liberation and release; Hey now, hey now; Don’t dream it’s over”, Crowded House, 1986

Optimism continued on Friday with talk of further containment rollback, while leaked results of successful trials of Gilead’s Remdesivir and Roche looking to release antibody testing kits also helped. Equities surged with the S&P500 +2.7%, and risk-on currencies rallied sharply with the NZD +1.7%, AUD +1.3% and USD/NOK -0.9%. China’s industrial production for March also added to views that a strong bounce back could be likely following the lifting of containment measures – production +32.1% m/m after falling -24.9% in Feb. Yields though were more steady with US 10yr +1.5bps to 0.64%, even as the Fed continues to taper purchases. Oil continued to fall (WTI -8.1% to $18.27) as storage capacity nears and as Asian commodity traders fear a shortage of credit. Today all focus will be on the possible easing of NZ containment restrictions to level 3 (from level 4) and the path to even lower restrictions given NZ recorded just 9 new cases on Sunday – NZ also has Q1 CPI, though pre-dates COVID-19 impacts. There is no data for Australia today, though focus will also be on the possible easing of measures with no new cases were recorded in SA, ACT, NT and Perth on Sunday.

Cabinet is meeting today at 10.30am NZ time (8.30am AEST) to decide on whether to move to level 3 restrictions today. A move to level 3 would allow manufacturers, forestry workers, builders and schools for year 10 and below to open. While only a partial easing, a move to level 3 would open up the possibility of moving to level 2 restrictions in early May should the virus continue to track the right way – on Sunday NZ reported just 9 new cases and it is thought a two week period of cases below 10 a day could be enough for a move to level 2 which would than allow most businesses to open, schools to open and gatherings of 500 persons outdoor being allowed. The conversation in Australia is also turning to the possible easing of measures with elective surgery likely to be allowed on Tuesday and some councils in Sydney are re-opening beaches.

The talk of easing up on containment measures also continues. President Trump laid out a roadmap on Thursday, though on Friday and the weekend more or less told states to open immediately. Some US states are easing restrictions (including Vermont, Minnesota and Texas), while other states want more funding for widespread testing before easing measures. In that vein, although leaked successful trails of Gilead’s Remdesivir helped to drive equities higher, the more important development to rolling back containment measures is effective and quick testing. In that vein more companies are aiming to produce antibody tests with Roche the latest, saying it could produce tests in the order of high tens of millions by June. Currently the best antibody tests have a success rate of around 70%, though it is not clear what the accuracy level of the Roche test is apart from meeting internal high accuracy standards (see Reuters for details). Also in the US, agreement on an additional $310bn for small-business looks more likely after a meeting between Treasury Secretary Mnuchin and leading Democrats. There is also talk of a $500bn fund for state and local governments to be in the next rescue package.

Although Q1 GDP fell 9.8% q/q and was -6.8% y/y – the first quarterly fall since the series began in 1992, monthly activity indicators bounced. Industrial production in particular rose sharply, up 32.1% m/m after Feb’s -24.9%. Retail though lagged, up just 0.2% m/m and fixed asset investment rose and will continue to be supported by a pipeline of infrastructure work that is lifting. The lack of a bounce in retail though does suggest consumers are lagging the recovery in production – pointing to perhaps lingering effects from the pandemic on consumption. However, anecdotes for April are suggestive of a strong bounce with LVMH reporting very strong growth in April to the extent that their y/y sales in China are now in the green. Another important update to this will be Kering (Gucci’s owner) who is reporting on Tuesday. Chinese regulators have also been assisting smaller companies by asking lenders to give smaller companies debt reprieves from Jan 25 to June 30 – total forbearance so far amounts to around 700bn yuan or $99bn). Forbearance has also been granted on housing loans and other personal debt.

While yields were little moved, the Fed has further tapered purchases to $15bn from $30bn – recall the program began at 75bn a day but has been gradually reduced. So far the Fed has purchased close to 1.3 trillion of treasuries. The announcement saw yields rise very slightly with US 10yr yields +1.5bps to 0.64% and the curve beer steepening. The Fed’s actions in corporate bond markets continues to see credit supported. Ford issued $8bn even though it lost its investment grade rating on March 25; the Fed’s buying of fallen angles clearly helping.

Oil prices touched a fresh 18-year low, with WTI going sub USD18 per barrel, with significant excess supply conditions weighing on sentiment. The near-term May contract trades at a significant discount – some $7 to June – with concerns about storage capacity being reached. Brent crude is closer to USD28, not facing the same downward pressure on the near-term contract. Commodity traders in Asia also reporting tight credit conditions with bankers reporting to be increasingly reluctant to lend 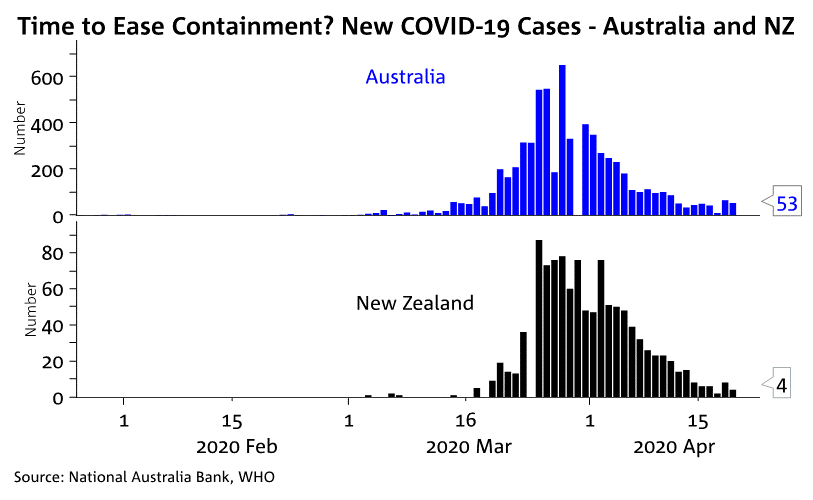 Focus remains on the probability of countries starting to ease up on containment measures. Across the Ditch, NZ is set to decide today whether to ease restrictions to level 3 (from level 4), while a more significant move to level 2 by early May could be occur given the track of new infections. In Australia, while PM Morrison has said we will have to wait until mid-May for a review, some easing of restrictions will occur this week with elective surgery expected to be given the green light on Tuesday and some beaches are re-opening in Sydney.

Domestically it is a busy week. The RBA Minutes are on Tuesday, along with a speech by Governor Lowe on “Economic and Financial Update”. The ABS is also unveiling a suite of higher frequency indicators including a Payrolls measure on Tuesday, flash retail sales for March on Wednesday and a preliminary measure of the trade balance on Thursday.

NZ has Q1 CPI today, though mostly pre-dates COVID-19’s disinflationary impacts . The PBoC also meets today where a rate cut is widely expected. Data heats up on Thursday with the flash PMIs including for Europe and the US, while US Jobless Claims will continue to get scrutiny given they have risen by 20m over the past 4 weeks. Earnings season also continues with IBM (Monday), Netflix (Tuesday) and Kering (Gucci’s owner, Tuesday). 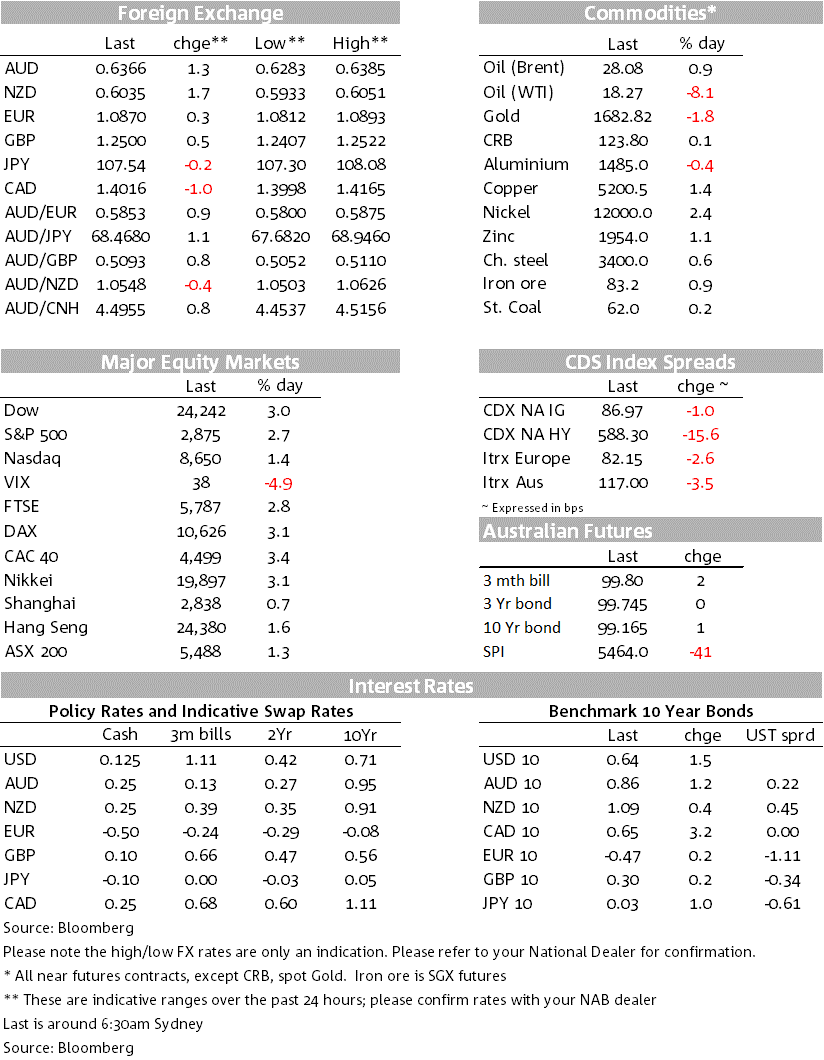