There’s a little positive sentiment pushing shares higher again today and helping the US dollar gain on the Yen and Swiss Franc.

Despite the absence of any positive news over the weekend or on Monday on the spread of the virus in the US and several large Emerging Market countries, leading the WHO to declare that ‘the worse is yet to come’, US stocks have recovered a portion of Friday’s sharp losses with gains accelerating into the close. The S&P has finished +1.5% up, the NASDAQ +1.20% (where Facebook more than recouped its early-day losses) and the Dow outperforming both to finish 2.3% higher. On the latter, the weight of Boeing in the index is the reason, its stock up 14% following FAA approval for it to commence testing of the 737 Max.

Seemingly helping drive positive risk sentiment has been two pieces of economic news. First and foremost US Pending Home Sales, which rose by 44%, more than double the expected 9% rise. While this still leaves the index 10.6% below their pre-crisis (February) level, the housing sector is undoubtedly the brightest spot in the US economy at present and given that mortgage applications – which lead Pending Home Sales which in turn lead Existing and New Home Sales – are above pre-crisis level, further strength in sales numbers is assured in coming months.

Also supportive has been the Dallas Fed Manufacturing Activity survey, rising to -6.1 from -49.2 in May and -21.4 expected – still contracting but a vastly reduced rate and impressive in so far as Texas is currently among the most affected states in term of the rate of new COVID-19 infections, albeit perhaps the survey came too early to pick up the full impact of this on activity.

Earlier in the evening Monday

Notwithstanding the rise in equities

US bond yields are lower relative to Friday’s close. Indeed, the 5-year Note yield has matched its record low of 0.2705% according to Bloomberg (currently -2.8bps at 0.274%). 10s are currently -1.6% lower at 0.625%. Bond have rallied in the last hour, which follows the release of prepared testimony to be delivered by Fed chair Jay to a congressional committee on Tuesday. This notes “We have entered an important new phase and have done so sooner than expected…while this bounce back in economic activity is welcome, it also presents new challenges — notably, the need to keep the virus in check.”  Of the nine different emergency lending programs established by the Fed so far during the crisis, Powell says “We are strongly committed to using these, as well as our other tools, to do what we can to provide stability, to ensure that the recovery will be as strong as possible, and to limit lasting damage to the economy.”

There hasn’t been a lot of rhyme no reason to moves so far this week. The USD is marginally stronger  (DXY +0.05%), unusual on a positive start to the week for risk, but explained by the weakness in both JPY and CHF, both just under 0.4% weaker and which together have a 17% weight in the index.  AUD and NZD are both virtually unchanged on Friday’s NY closing levels. AUD is most likely to be driven by month-end and year-end considerations today, even though the economic and events calendar is of some interest today.  From a month-end portfolio rebalancing perspective, we wouldn’t expect particularly heavy flows, given that the S&P 500 is hardly changed on its end-May levels (currently +0.3%). More relevant could be EUR-related activity, given that European stocks has strongly outperformed in June, the Eurostoxx 50 currently 7.3% up on the month.

A very full calendar today, both locally and internationally.

Here, RBA Deputy Governor Guy Debelle is speaking at 12:30 AEST on ‘The Reserve Bank’s policy actions and balance sheet’. We also have weekly ABS payrolls data (for the week ending June 13) and consumer confidence, plus the RBA May credit data (where annual credit in April slipped to 3.6% from 3.7% in March, the latter up from a low of 2.4% last December).

The key international release should be China official PMI data for June, due at 11:00 AEST, expected to be little changed on May (manufacturing seen at 50.5 from 50.6, non-manufacturing flat at 53.6). Focus should be on the latter for any signs of a pick-up in the pace of recovery in the consumer side of the economy which has clearly lagged the industrial side in the last couple of months.

Also in our time zone we’ll have the ANZ NZ June final business survey (preliminary was -33 for Confidence and -29.1 from the own Activity outlook, where the lack of meaningful improvement on the May numbers was a disappointment).

UK PM Johnson is slated to unveil new fiscal spending plans in a major speech (in a radio interview on Monday he drew parallels with US President Roosevelts ‘New Deal’ of the 1930s). Final Q1 GDP is also due (prior estimate was -2.0% q/q).

The US has the Chicago PMI and Conference Board vintage of Consumer Confidence, the latter seen up to 90.5 from 86.6 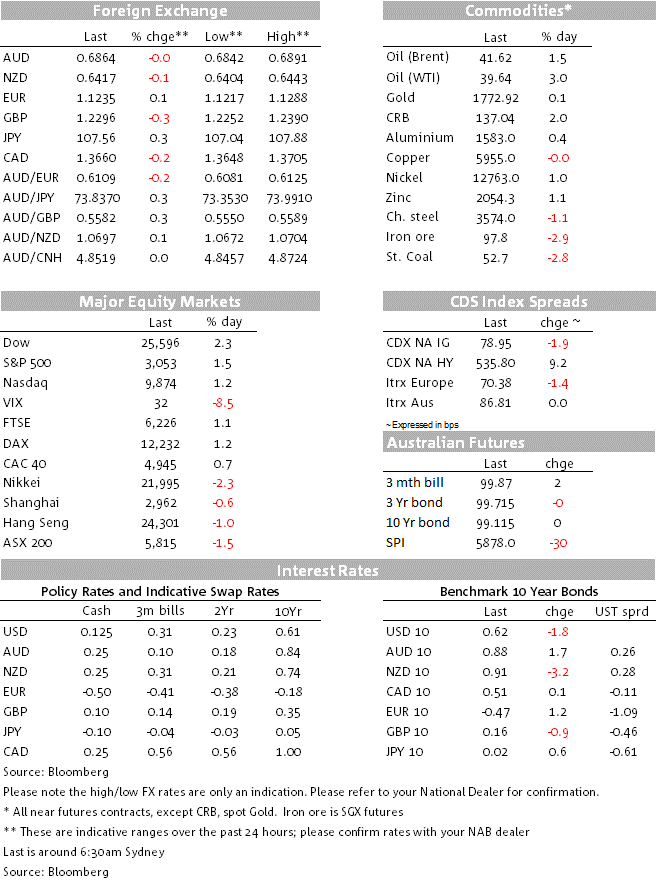