Much as I’d like to claim credit for today’s song title, it was the first news alert that popped up on my phone following the 5am alarm clock this morning, courtesy of the Financial Times. Now I can’t get it out of my head so am sharing the love. Sing along…and happy Friday.

The not so nice guy is of course Fed chair Jay Powell who, while largely meeting expectations in terms of formal policy pronouncements yesterday, highlighted in the ensuing press conference how this cycle was very different from the previous one, with a higher inflation starting point, a tighter labour market and growth running above trend, leading to an unwillingness to rule out (or in) a rate rise at every Fed meeting this year. He said there was “quite a bit of room” to raise rates without threatening the labour market.

For the US interest rate markets, the effect of Powell’s comments has been to see the US money market move to price 4.7 quarter-point increases to the Fed Funds target rate this year, from 4.2 previously. By comparison, relative to before Tuesday’s higher than expected Q1 CPI data, the local rates market has moves its rates pricing up from 3.9 (25-point) RBA hikes to 4.3. For next Thursday’s Bank of England meeting – the next central bank cab off the rank – a 25-point rise is now 94% priced, with a total of 4.5 hikes priced in for 2022.

The US bond market has undergone some significant curve flattening relative to Wednesday’s New York close. The 2-yer yield is up another 2bps to 1.17% – actually a little less than we saw during Thursday’s Tokyo trading day – while the 10-year rate is down 7bps to 1.79%.  The Eurozone (German) 10-year benchmark by comparison is 1.6bps higher at -0.06%. The flirtation with positive 10-year yields, seen briefly a week or so ago, in now a distant memory.

Thursday’s across-the-board weakness in stock markets – in our time zone headlined by a 3.1% fall for the Nikkei – have given way to a small up-day for European stocks despite the Eurostoxx 50 being down over 3% in futures market prior to the European open. That counter ended the day 0.5% up and indeed virtually all European bourses finished in the green, including a 1.1% gain for the UK FTSE100. In contrast early-day US equity market strength has given way to an afternoon slide. Still an hour or so to go (and the last ‘hour of power’ has been a sight to behold in recent sessions) but the S&P500 is currently 0.2% down on the day and NASDAQ off 1.1%.

Foreign exchange sees the USD significantly extending its post-Fed gains, with the DXY index currently up three-quarters of a percent on Wednesday’s New York close to 97.2, comfortably above the 2021 (November 24) high of 96.9.  So much for all those analysts rushing to conclude that the USD rally was done, following the early-year divergence between (rising) US interest rates and the (falling) USD – not a club NAB’s FX Strategy team rushed to join.

AUD and NZD both sit firmly at the bottom of the G10 scoreboard ahead of the New York close, down 1.1% and 1.0% respectively, AUD/USD to a low of 0.7025 and NZD. Inevitably, the 0.6993 3 December 2021 low is the next focal point for AUD/USD, though as we have noted on several occasions in NAB FX Strategy reports since mid-December, we expect any dips below 0.70 to prove relatively short-lived. No guarantees of course! Of some note here in regards to AUD and NZD losses has been the first move up this year in USD/CNY – from a pre-Fed low of 6.32 to just shy of 6.37, a rise of 0.8% and by its own standards a very big one-day move. The Chinese Lunar New Year is February 1 (heralding the year of the tiger) and historically, CNY has been strong into – but weaker out of – the LNY holiday.

Thursday’s heavy US economic data calendar has been something of a sideshow. The Advance estimate of Q4 GDP exceeded expectations of 5.5% coming in at  at 6.9% (annual rate) but not really unexpected after the surge reported in both retail and wholesale inventories the day before, too late for economist to be re-surveyed. Indeed, inventories accounted for a whopping 4.9% pf the overall 6.9% growth rate, with ‘Final Demand’ rising by just 1.9% and Personal Consumption Expenditure 3.9%. The impact of supply chain shortages shows up in meagre 0.8% rise in equipment spending within the business investment category. As for inflation, the core PCE deflator printed 4.9%, as expected.

Other data included 0.9% fall in Durable Goods Orders (0.6% expected) and dragged lower by Boeing orders, with the ex-transport reading +0.4% in line with the 0.3% consensus. Pending Home Sales fell by a larger than expected 3.9% (-0.4% expected) thanks to the hit to activity from Omicron, while weekly jobless claims fell to 260k from 290k the week before, much as expected but still consistent with a soft January non-farm payrolls report. 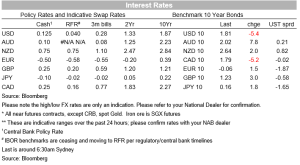 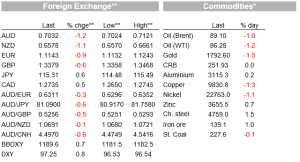