China’s official response to President Trump’s latest round of import tariffs sent markets into a spin on Friday.

Overview: The enemy within

President Trump had a complete hissy fit on Friday, first in response to China’s retaliation against his August 1st decision to impose tariffs on the remaining $300bn-worth of Chinese imports, and then again after Fed chair Jay Powell’s Jackson Hole speech where the President was evidently looking for an announcement that the Fed would be immediately cutting rates again, and not just by 25bps.

Trump tweeted “as usual, the Fed did NOTHING! It is incredible they can “speak” without knowing or asking what I am doing, which will be announced shortly. We have a very strong dollar and a very week Fed. I will work “brilliantly” with both, and the U.S. will do great. My only question is, which is our biggest enemy, Jay Powel (sic) or Chairman Xi”

Referencing the Fed chair as the enemy is, frankly, just par for the course (as poor a putter as Powell is, according to Trump last week) but referencing President Xi now as the enemy rather than ‘my friend’ is a lot more serious. Indeed, the fall-out is already apparent in an editorial in Saturday’s state-run People’s Daily, saying China will follow through with retaliatory measures announced Friday and fight the trade war to the end in the face of the U.S.’s failure to keep its promises.

More telling perhaps were tweets later in the day from influential Chinese journalist Hu Xijin who said on Twitter that “China has ’lost’ the US already: all-round high tariffs, Huawei ban, political hostility, Hong Kong, Taiwan… We’re facing a completely different United States. We have nothing more to lose, while the US is just starting to lose China”.

Hu also tweeted that if U.S. automakers heed Trump’s Friday call for “major American companies” to desert China, they would be giving up the market to Japanese and German brands. “Go back to the US, let each American family have 20 cars,” he tweeted, followed by a smiley face.

For the record China’s retaliatory response to the August 1st U.S. tariff  announcement was for further tariffs on $75bn worth of US imports, including, for the first  time, oil, soybeans, the re-imposition of a 25% tariffs on US autos and, from December 1st, a 5% tariff on auto parts.  This prompted Trump to says that the 25% tariff rate on the existing $260bn worth of Chinese imports would now go to 30%, and the planned 10% tariff on the remining $300bn, planned to take effect from either September 1st or December 15th, would now be at 15%.

This latter news was announced at 5pm ET, so an hour after the US stock market had closed with the NADAQ down 3%, S&P -2.6% and the Dow -2.4%. The IT and energy sectors led the fall in the S&P, each down by more than 3%. WTI crude was down over $1 or more than 2% following the China oil import tariff news.

In FX, it was notable that the USD lost ground, DXY ending the day 0.5% lower and not just because of the predictable strength in the safe-haven JPY and CHF (both up by almost 1%).  Whether because of the sharp fall in US yields or perhaps because of the risk of Trump ordering FX intervention in a vain attempt to weaken the greenback, is hard to say. What is apparent is that in the current environment, the EUR is exhibiting stronger safe-haven characteristics than the USD, notwithstanding the fact the Eurozone will, short term at least, suffer more economic pain by way of fallout from the latest escalation in Sino-US trade tensions.

As for Powell’s Jackson Hole speech, the Fed chair did not pull back from referencing the challenges posed for Fed policy from trade policy uncertainty. As our friends at Pantheon Economics pointed out, Powell said “fitting trade policy uncertainty into this framework is a new challenge… [there are] no recent precedents to guide any policy response to the current situation… Moreover, while monetary policy is a powerful tool that works to support consumer spending, business investment, and public confidence, it cannot provide a settled rulebook for international trade.”

Powell acknowledged that “trade policy is the business of Congress and the Administration”, which as Pantheon notes you can read either a plea to Congress to take back some of the Mr. Trump’s legal powers, or as a simple reminder to markets and the commentariat that it just isn’t Mr. Powell’s fault, or both.

Powell went on to noted that “The three weeks since our July FOMC meeting have been eventful, beginning with the announcement of new tariffs on imports from China. We have seen further evidence of a global slowdown, notably in Germany and China. Geopolitical events have been much in the news, including the growing possibility of a hard Brexit, rising tensions in Hong Kong, and the dissolution of the Italian government.”  This looks to make a September rate cut a shoo-in.

Pantheon’s Ian Shepherdson ends his note saying “We don’t envy Mr. Powell and his colleagues right now; all their analysis and forecasts can be upended by a single tweet, so the policymaking process has been wrecked, even without the overlay of the president railing at the Fed like Lear on the heath, but less coherently”.   Nice one Ian.

RBA Governor Phil Lowe also weighted into this debate, speaking on a panel at Jackson Hole, saying central bankers have limited ability to cushion the global economy from the headwinds of mounting political uncertainty. “We are experiencing a period of major political shocks,” citing developments in the U.S., Brexit, Hong Kong, Italy and elsewhere. “Political shocks are turning into economic shocks.”, Lowe said.

“Monetary policy cannot deliver medium-term growth,” Lowe said. “We risk just pushing up asset prices.” He said that infrastructure investment and structural reform in economies around the world would have much greater impact than cutting interest rates. But politicians are reluctant to act, he said.  Ending the political uncertainty would also bring benefits, he said. “With these three levers stuck, the challenge we face is monetary policy is carrying too much of a burden.” The bottom line here is that out market may need to scale back slightly on its RBA policy expectations, including the prospects for unconventional policy.

Today, NZ trade data up shortly and offshore tonight both the German IFO survey and US Durable Goods Orders will be well worth a look. 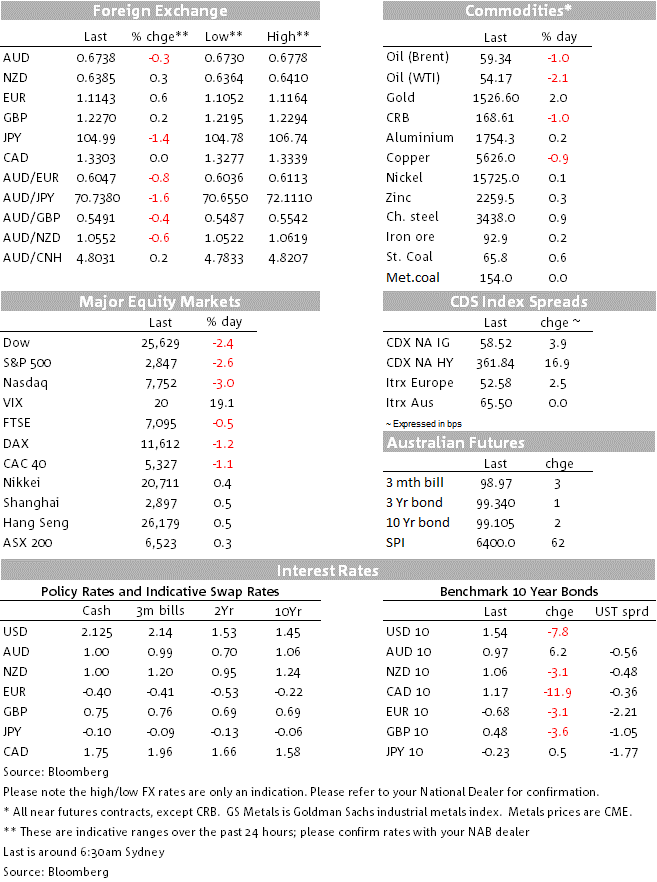