With yields rising there’s been a question mark over whether the appetite for treasury bonds is falling.

Oh oh oh oh, It’s up to you now
It’s time to take the pressure off – Duran Duran

After falling just under 1% intraday

The S&P 500 has done a U turn and is now trading marginally in positive territory.

Core bond yields are also enjoying a bit a reprieve with 10y UST yields set to end the day lower, after rising everyday so far this year, a solid auction the catalyst.

The improvement in sentiment and move lower is UST yields sees the USD lower, ending a three-day rally. US political drama continues with the House expected to pass resolution for VP Pence to remove president Trump, vote is expected to fail setting up Impeachment vote for Wednesday.

APAC equities closed in positive territory with China’s CSI 300 the stand out, up 2.85%, driven by a surge in financial and securities stocks.

Europe was unable to embrace the positive vibes from Asia, with main regional indices closing day down between -0.14% and -0.65%. COVID news probably a factor at play with Chancellor Angela Merkel warning that Germany may need to prolong its coronavirus lockdown until Easter due to risks posed by a fast-spreading variant from the UK.

The decline in European equities weighed on US equities early in the NY session, but in the past couple of hours market sentiment has made a positive u turn.

After declining almost 1% intraday, the S&P 500 is now flirting with idea of ending the day marginally in positive territory. There has not been a clear catalyst, but energy shares have led the recovery up over 3% with gain in oil prices of around 1.6% helping the move. Consumer Discretionary and Financials are also having a good day up 1.44% and 1,07% as I type. JPMorgan Chase, Citigroup and Wells Fargo are among those due to report earnings on Friday.

Core bond yields are also enjoying a bit a reprieve with 10y UST yields set to end the day lower, after rising everyday so far this year, a solid auction the catalyst.

Early in the session

The 10y Note traded to a high of 1.1838%, but a solid 10y auction appears to have been the catalyst for a turn around in fortunes. Bloomberg noted the 10-year offering stopped at 1.164%, nearly a basis point through the when-issued yield of 1.172%. Bid/cover was solid at 2.47, and customer bidding was fairly strong.

Prospects of a solid US economic recovery in 2021 fuelled by expectations of more US fiscal stimulus and an effective vaccine roll out have contributed to the recent move up in UST yields.

Another factor has been an increase in speculation on when the Fed will look to taper its QE programme. Recent Fed speakers have signalled the potential for tapering to beginning late in 2021, if solid economic recovery eventuates. Speaking overnight Fed Bullard and George provide a more cautious tone to the discussion .

Fed hawk George said she was optimistic for continued recovery, but that policy was appropriate, and it is too soon to speculate on the timing of any change to the Fed’s stance. She said the vaccine roll out had been slow and delays and disruptions here remain one of the most substantial risks.

Meanwhile Fed Bullard said it’s premature to discuss reducing the amount of monetary-policy support for the US economy while the pandemic is still raging.

After three days of gains

The USD has been on the back foot overnight with the improvement in risk appetite and decline in UST yields weighing on the greenback’s performance. In index terms the USD is down 0.38% (DXY) and 0.56% (BBDXY).

The Australian notes this morning that China has accused Australia of “weaponising the concept of ­national security’’ after a $300 million bid by a Chinese state-owned company to buy a ­construction company was scuppered by Josh Frydenberg .

A Chinese Embassy spokesperson said that “Weaponising the concept of national security to block Chinese investment is detrimental to mutual trust as well as bilateral economic and trade relations. We urge the Australian government to provide a fair, open and non-discriminatory environment for all foreign investors including Chinese enterprises as promised.”.

Tensions between Australia and China don’t look to be easing and when asked about the threat of potential retaliation from China, Acting Prime Minister Michael McCormack said the government would “always do what’s in the national interest” 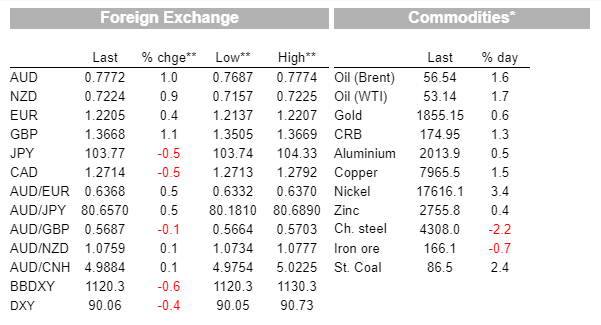 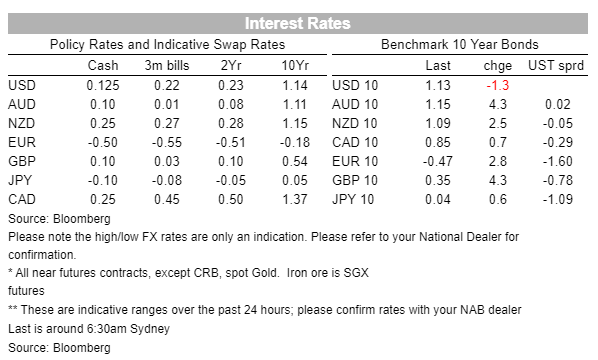 The ECB changed nothing overnight, with President Lagarde saying risks remained on the downside.

QE to continue, RBA to grapple with ending YCC.

AMW: Housing market activity soars but with little implications for the RBA