US shares fell as investors once again weighed up inflation concerns.

“Cruisin’ down the freeway in the hot, hot sun; Suddenly red-blue lights flash us from behind; Loud voice booming, “Please step out onto the line… How bizarre “, OMC 1995

Markets trade with a cautious tone overall after last week’s rollercoaster ride for equities. The S&P opened the week in the red, seeing initial declines of up to -0.8%, which was pared in the last few hours of trade to be down just -0.3%. Losses were led by the tech sector with the NASDAQ down -0.4%. Ongoing inflation concerns despite Fed rhetoric of it being transitory remains the overwhelming theme. While not market moving, the second-tier NY Empire Manufacturing Survey played into the inflation narrative with both prices paid and received at record highs. Implied inflation breakevens rose with the US 10yr breakeven +2.6bps to 2.57%. The rise in breakevens was driven by nominal yields which rose 2.0bps to 1.65%. Also playing to the inflation theme was gold which is up 1.3%, in what was a strong night for commodities with notable gains in copper (+1.3%), oil (Brent +1.3%) and iron ore. The USD (BBDXY) is on the back foot down -0.2%, with gains led by USD/CAD (-0.3%), GBP(+0.3%) and EUR (+0.1%). The AUD underperformed, down -0.1% to 0.7765.

There hasn’t been a lot of data to inspire markets, with markets instead reflecting on last week’s data. The NY Fed’s Empire State Manufacturing Survey played to last week’s inflation theme with both the prices paid and received indexes hitting new record highs in the survey that dates back to 2001. Importantly for the near-term outlook, the forward looking questions around prices paid and received was also elevated. Encouragingly for Payrolls, firms on net expect to significantly increase employment in the months ahead. The overall index as close to expectations at 24.3 against 23.9 expected and 26.3 previously. Also out overnight was home-builder sentiment which was steady in May at a historically high level.

The other piece of data out earlier worth noting was China monthly activity data which didn’t provide any support to risk appetite yesterday, being close to expectations apart from retail sales, which were much weaker than expected (17.7% y/y v. 25% expected). The softer retail numbers are hard to interpret and delving into the seasonally adjusted monthly figures shows sales running at 0.3% m/m, down from the 0.9% pace recorded in February and March. Other indicators of Chinese households though suggest we shouldn’t read too much into it with the unemployment rate falling to 5.1% (the lowest since November 2019) and new home prices were up 0.5% m/m.

Yields did drift lower during APAC, but pushed higher overnight. The US 10-year Treasury yield rose 2.0bps to 1.65%. It is worth noting that inflation breakevens continue to lift with the 10yr breakeven +2.6bps to 2.57%. Combined with the gold price which is up 1.3% and notably at $1,866 is above its 200 day moving average of $1,845, suggests inflation fears remain within the market. It is also notable the rise in gold has also occurred at the same time as Bitcoin has seen a large fall, with prior modelling suggesting some substitution between the two asset classes had been happening in recent months Bitcoin has now fallen by 25% since 10 May and is currently trading at 44,465, which could see substation back towards gold as the ultimate inflation/risk hedge.

Fed speak has mostly played to the dovish house view. Fed vice-chair Clarida noted “we have not made substantial further progress” on employment, which is the trigger to start tapering bond purchases, and he repeated Powell’s previous comments that the market will get advanced warning before anticipating scaling back the pace of those purchases. The Fed’s Bostic in a CNBC interview also noted that that “we are still 8 million jobs short of where we were pre-pandemic” and that greater understanding around inflation dynamics is unlikely to emerge “ at least until early fall, and it may take longer than that” (see CNBC interview for details).

The AUD (-0.1%) and NZD  (-0.6%) on the other hand underperformed with not a lot to explain the underperformed apart from the mild dip in risk sentiment. There is perhaps some spillover in sentiment from virus developments in Asia with COVID-19 cases flaring in Taiwan and Singapore. Commodities meanwhile remain very favourable for the AUD with Bloomberg’s commodity price index up 1.4% for the day. Copper prices are higher, after last week’s selldown, while a host of other metal prices are also stronger on the LME. Iron ore prices on the Singapore exchange rose nearly 3% yesterday to about USD215, having fallen below USD190 late last week.

The RBA Minutes is the only piece on the radar and are unlikely to shed much new light given the recent SoMP and speech by Deputy Governor Debelle. Offshore it is also quiet with just GDP for Japan and the EZ, while the US has housing starts and permits. Details below: 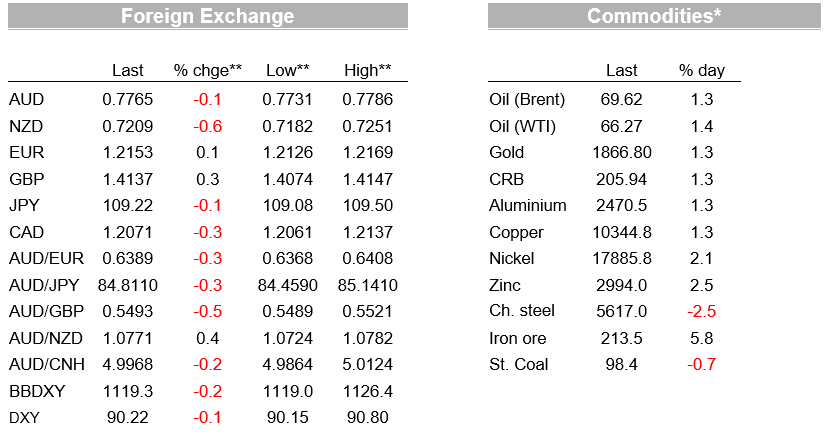 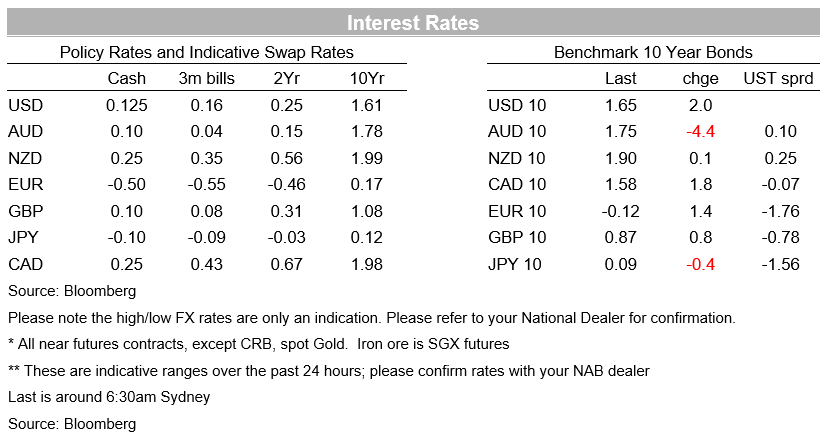 KangaNews Survey of Australian Fixed Income Investors: The annual KangaNews survey is now open. If you are an Australian-based Fixed Income investor and value the research provided by NAB’s Economics, Fixed Income (ACGB, Semi, Swap and Credit), Securitisation, Commodities and FX teams, could you please participate in this year’s poll at the following link VOTE HERE. Please note that this survey encourages all participants to vote, not just one vote per institution.