Thanks to social media, more people are pursuing the job they want, where they want it. Those who prefer country living no longer have to wonder why they’re going to work in the city each day simply to pursue a dream career – as this rural film-maker recently discovered. 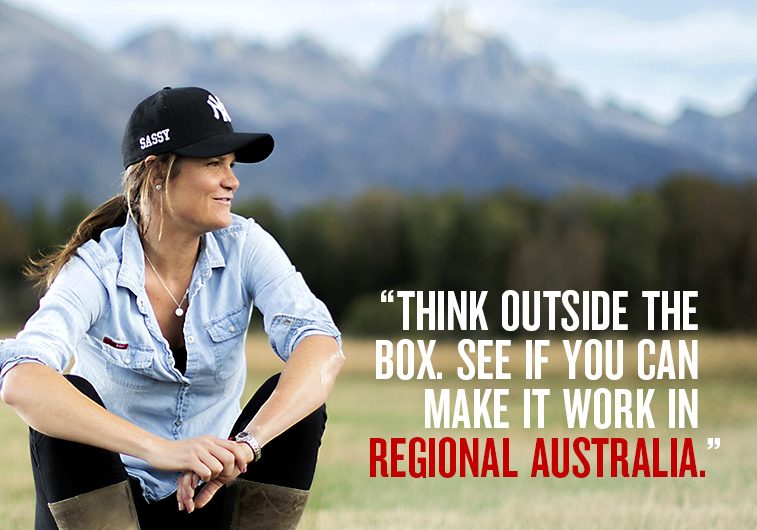 When Sascha Estens moved back to her home town of Moree in 2011, she assumed she was giving up her career in film – with good reason. Located in northern New South Wales, the Moree shire is best known for its cotton and wheat thanks to kilometres of fertile black soil plains. The town proper boasts a population of fewer than 7,500 people. But even though the opportunities to work in film appeared almost non-existent, Estens knew the move made sense. She could no longer justify working in the big smoke, however much she loved her film work. Giving up her chosen career, she concluded, was the price she had to pay for moving back to the area she called home. As it turned out, she couldn’t have been more wrong.

Power of the internet

The advent of digital technology and the stratospheric rise of social media saw Estens go from doing the odd video project here or there to setting up her own independent film company, Rabbit Hop Films. Within two years, the company expanded to several employees – a mix of full-time, part-time and casual – as it amassed thousands of followers across multiple social media platforms.

Admittedly, success didn’t come overnight. For the first few years, Estens – and certainly her family and friends – considered her film-making something of a hobby. She did, however, enjoy some early wins. It was in her first few months back home that Moree was hit by major flooding. Estens’ instinct as a film-maker took over. “I just picked up the camera. I was in helicopters, boats, swimming, making my way around the town to tell the story.”

She uploaded her documentary onto the internet when most people still couldn’t access the town and soon the online film was being viewed right around the world. As a result, a host of calls came in from city-based news stations asking her to do work for them in the area.

A different kind of deluge

While Estens didn’t appreciate the long-term implications of what was happening, she quickly grabbed the opportunity and became something of a one-person show.

“I was quite funny to look at,” she says with a laugh. “I was the interviewer, the camera person, the audio person and the editor.” And all the while, social media continued its inexorable rise.

“The numbers of people using those platforms was starting to gain momentum around 2012/2013 and yet I still didn’t see it,” Estens says. “I was using YouTube and Facebook, and starting to see everyone else using them, but I didn’t really realise at that time how much that would change everything for me.” While Estens had upped her film work to three days a week, she was still having to chase jobs. It wasn’t until she returned from a prolonged stint in the US, where she’d gone to gain more film experience, that her career really took off.

“One Christmas I came back to Australia for what I thought would be a couple of months to spend time with family. I did one video, a Peroni film [set on a Moree barley farm, the sole supplier of malt barley for Peroni beer], and my phone just rang off the hook off after that.” She couldn’t quite believe the response. “I was like, what has changed? Seriously? When I came back to Australia a year before, it wasn’t like this.”

Suddenly it made perfect sense to set up shop in her home town. As it turned out, her instincts were spot on. “I’ve only been back in Australia a couple of years now, but the growth of my company’s been exponential. It hasn’t affected us at all being based in Moree.”

In fact, the location has been a big plus as far as Estens is concerned. “Moree’s the richest agriculture shire in the country and that’s largely what a lot of my work has been based on… it has certainly helped being centred here.” And then there’s the high quality of the material Rabbit Hop Films produces, which is critical in an internet-savvy world saturated with content. But being authentic is also a must. As Estens notes: “People are sick of promotional crap.”

That’s why her team puts significant work into the pre-production phase – into finding a truly compelling story in the material they’re given and ensuring they tell it in an interesting way. The end result has a very homegrown feel.

Estens was chosen to be an Australia Day ambassador this year, based in Coonamble. Her message? “Don’t discount a career because it’s a city-based career. Think outside the box a bit and see if you can make it work in regional Australia.”

Easy does it: changes that can improve agribusiness profitability

Pathway to profit: how Australia’s agri operators can boost their bottom line through smart thinking and easily achievable changes.