Third generation dairy farmer Tim Marwood was looking for a way to go from “price taker” to “price maker” when he saw an opportunity – premium artisanal ice cream.

Value adding to the family dairy operation was the motivation behind Victorian dairy farmer Tim Marwood and his wife Caroline’s decision in 1999 to turn their hands to making premium quality boutique ice cream. Today ice cream lovers around Victoria are tucking into more than 55,000 litres of Timboon Fine Ice Cream a year.

Selling locally-made, artisanal ice cream free from allergens and artificial flavours might seem like an unremarkable enough business idea in 2016. However, it was a big gamble for a third-generation dairy farmer to take back around the turn of the millennium, long before hipsters had transformed Australian’s eating habits.

“I left the family dairy farm to go to school, then worked in advertising in Melbourne during my twenties,” Tim Marwood says. “Eventually, Caroline and I returned to the farm, but after a few years that wasn’t working out. I was having differences in opinion with my father about how to run things.

“One day I was looking into buying a tractor. I realised I wasn’t sure I’d be making enough from dairy farming to cover the repayments on it. I realised I had to value add and become a price maker rather than a price taker.”

Timboon, in the Western District of Victoria, was already famous for Timboon Farmhouse Cheese. Tim and his wife Caroline Simmons figured they might have similar success with another dairy product and Timboon Fine Ice Cream was born.

“This was 1999 and there were, as far as I know, only a few boutique ice cream makers in Australia,” Marwood says. “We knew nothing about making ice cream. This was before the internet had taken off so we had to import some books about it from overseas.

“There was no capital available, so we put $25,000 worth of secondhand equipment on our credit cards. We thought the way to go was to produce exotic flavours, like blackberry and shiraz. Luckily, some amateur market research was done. We found that while people were interested in buying quality ice cream made from fresh milk and cream, they wanted it in the traditional flavours.

“Finally, we supplied some ice cream to some nearby shops, only to find the retailers were making a much bigger margin than us. While all this is going on, my wife, who was a nurse, is working at the local hospital and I’m milking cows just to keep the money coming in.” 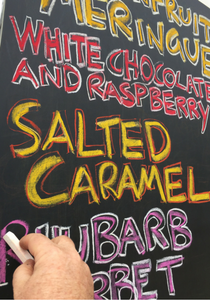 Timboon Fine Ice Cream had run into an often-fatal challenge for artisanal businesses – a lack of economies of scale that, among other headaches, make distribution difficult. Things turned around when Tim and Caroline decided they’d experiment with selling their product at a local festival in late 2000.

“We customised a trailer, put our branding on it and set up shop. The advantage of festivals is you’re only paying rent for a day or two, so it’s not a big commitment. We couldn’t believe how well we did – we made more money than expected in one weekend. At that point, we’d hit upon the way to make the business work.”

A decade and a half later, Tim and his wife still travel around Victorian festivals selling ice cream. But these days they do it not from a trailer but the kind of well-equipped food truck usually found offering pulled-pork tacos to inner city food lovers. Plus, they now employ a couple of local staff to make their ice cream. And they have a business relationship with three other operators, who travel the country also selling Timboon ice cream at festivals, markets and events.

“It’s not exactly a franchise arrangement; we treat them like business partners,” Marwood explains. “But we expect them to operate in a way that reflects our brand values and business philosophy.”

Nowadays, Tim and Caroline’s business moves 55,000 litres of ice cream a year. Some of that is sold in selected shops but Marwood is wary of the major retailers. “There is real value in being boutique with more and more customers questioning the provenance and quality of their purchases. We don’t want to be at the mercy of the big players and have found the independent stores are more aligned with our core values,” he says. 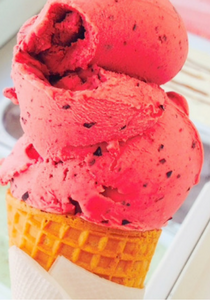 Timboon Fine Ice Cream now finds itself a victim of its success with the market flooded with artisanal ice cream makers hoping to replicate its trajectory. Always determined to stay one step ahead of the game, Tim and Caroline have also built a visitors centre in the township of Timboon. Opened in late 2016, tourists can drop by and pick from one of the 24 different ice creams and sorbets the Marwoods now produce. They can also “get hands” on with ice cream making experiences that will be on offer.

“We’re never going to have a mass-market product,” Marwood explains. “So the visitors centre, apart from creating another revenue stream, is about delivering a fun high quality interactive experience. We want people to opt for Timboon when deciding which premium ice cream they’re going to buy and become loyal brand advocates.”