Infrastructure investments in Australia: Gearing up for the new normal 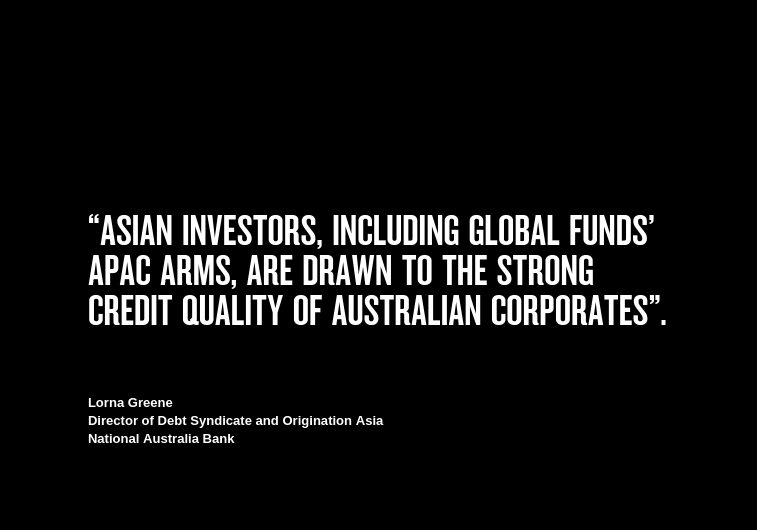 Across Australia dozens of potentially transformative urban infrastructure projects and initiatives are under way, enhancing productivity in the domestic economy.¹And many of these projects are funded by Asian investors in search of portfolio diversification in a stable economic and political environment. Australia continues to offer all of that thanks to the federal and state governments’ prioritisation of social and economic infrastructure spending, which remains a key focus area nationally across sectors. The effect of this has been seen across various funding markets with 2018 marking a record year for loan issuance in the sector, while bond markets equally saw heavy issuance levels²

There are good reasons for confidence in the longevity of this trend despite the uncertainty in the global political and business landscape following years of sustained growth. Being mindful of the geopolitical and macroeconomic factors that could impact investment trends over the coming months will help Asian investors enhance the success of their ventures in Australia.

Uncertainty about the outcome of the upcoming federal election could have a near-term effect on investments and market confidence. As with every election, a change in administration inevitably means a change in policy direction, and in the forthcoming election there is significant debate about how the policies of both sides will impact on the economy in the face of what is expected to be a downturn.³

Indeed, the Australian economy after years of consistent growth is starting to slow4 along with the rest of the global economy5 .Sentiment and, in turn, consumption have started to cool off6, prompting the central bank to keep interest rates low with at least one rate cut expected by many market participants before year-end to support economic activity.

While this could make the Australian market less attractive to foreign investors from a returns perspective – especially when compared to opportunities in the US dollar and local currency markets – it also makes raising funds in Australia cheaper. Several international borrowers, such as McDonald’s and GM Financial7, ave taken advantage of this trend to issue kangaroo bonds in recent months.

Yet another challenge is a drop in corporate issuances as Australian companies refrain from Australian dollar (AUD) bond opportunities for longer tenor options such as in the US private placement market. Issuances from the financial sector at the same time have remained steady as loan growth moderates on the back of new lending restrictions and declining home prices.

Meanwhile, China, a major investor in Australia, has started to pull back as it copes with the fallout of its ongoing trade war with the United States. It is increasingly looking inward, focusing on reducing debt and firing up its slowing economy by fueling domestic demand. As a result, Chinese investments in Australia fell nearly 38% in 20188 from 2017 after falling 40% the year prior.

Zeroing in on opportunities

Despite these issues, Australia’s infrastructure sector continues to hold out promise as an avenue to diversify portfolios into investment-grade public and private debt. This includes refinancing opportunities following the recent privatisation of state assets.

“Asian investors, including global funds’ APAC arms, are drawn to the strong credit quality of Australian corporates, particularly in the context of Australia’s AAA sovereign credit rating. And this, coupled with Australia’s stable regulatory environment, as well as the relatively attractive returns on offer, continues to draw investors from across the region,” says Lorna Greene, Director Debt Syndicate and Origination Asia at National Australia Bank.

The Australian government has committed to spending more on infrastructure even as it looks for large inflows of funds to bring to fruition its many ongoing projects over the next two years. A significant amount of infrastructure will have to be financed in partnership with the private sector, and in Australian dollars to avoid currency risks and save on hedging costs. Notably the government is also looking to reduce its reliance on a single market and attract investors from across the region.

Investors from Japan – where interest rates remain negative – are especially drawn to Australia while investors with ultra-long horizons, such as life insurers in Korea, Taiwan, Hong Kong and Singapore, are also becoming more active in the Australian market. This has resulted in several new 20- to 30-year AUD bond issuances, as well as direct investments in infrastructure projects. National Australia Bank was lead manager on two recent 25-year issuances from Macquarie University and the University of Sydney, which raised A$50 million (USD$35 million) and A$200 million, respectively, to finance improvements or augment campus infrastructure.

This trend favouring ultra-long bonds has in part been driven by regulatory developments in investors’ home markets, such as a decision by South Korea’s Financial Supervisory Service in June 2017 to ease restrictions on Korean life insurers investing abroad, as well as favourable basis swap conditions.

Borrowers, increasingly mindful of challenges such as falling interest rates, a weak currency and growing restrictions on bank lending, are helping kindle interest in alternative investments. The institutional loan market is growing rapidly as companies seek to diversify their sources of funds and attract long-term investments – such as the AUD2.7 trillion superannuation funds asset base11.

Direct investments are also an emerging source of funding for infrastructure projects as a growing number of insurance companies and asset managers deploy specialist teams to conduct in-depth analyses of projects, positioning many of these investors for project financing and institutional term loan (ITL) investments for the first time.

NAB’s 6th Annual Asian Debt Capital Markets Conference, to be held on 14 May in Singapore and 15 May in Hong Kong, followed by a corporate luncheon in Tokyo on the 17 May,  will focus on these and other key issues including alternative investments, infrastructure financing and the latest regulatory developments in Australia and New Zealand.