Risk sentiment can turn quickly with the S&P500 initially up +0.9%, before more than fully reversing and closing down -0.2%. Markets were initially buoyant after a sharp fall in US continuing jobless claims fuelled hopes of a quick recovery, while the European Commission’s €750bn recovery fund proposal is looking more likely to be approved. Into the NY close, optimism has given way to caution following President Trump’s executive order on social media companies and the flagging of a press conference on China where Trump has said he would outline his response regarding China’s resolution to insert national security laws on Hong Kong.

The USD (DXY) remains on the backfoot, down -0.5% and breaking below its recent April/May range. The key reason for the break has been the lift in EUR (+0.9%) as hopes build the frugal four will approve the €750bn recovery fund. Reflecting that expectation, European bonds continue to rally with Italian 10yr yields -7.5bps to 1.42% and the Italian German 10yr spread is now at 184bps and its lowest since late March.

Global growth/commodity G10 proxies continue to lift with the AUD +0.7% to 0.6638 and the NZD also 0.7% and is a touch above 0.62 at 0.6210. The AUD and NZD have been highly correlated with equity market moves on signs of economic activity picking up (as high frequency data such as Apple/Google mobility have shown) and as vaccine hopes remain high given there are 10 human trials currently underway. US-China tensions, especially possible action by the US over Hong Kong do have the potential to change this narrative significantly.

Trump has scheduled his press conference for Friday (night AEST). There is a lot of speculation of what this could entail, but could include removing specific protections regarding Hong Kong to allow sanctions against Chinese individuals/businesses operating in Hong Kong.

President Trump’s other move that lead to some caution in markets was the executive order regarding social media companies. The order targets a law known as Section 230 which protects internet companies from liability for content posted by their users but being treated as “platforms” rather than “publishers”. The executive order directs the Federal Communications Commission and the Federal Trade Commission to study whether they can place new rules on companies. The move came as Twitter started factchecking tweets (Twitter stock -4.5%), though changes to laws would require Congress and it is unclear the exact impact of the order.

US Jobless Claims was the first “hard data” to reflect the pick-up seen in the high frequency indicators. Continuing claims fell by 3.9m last week, suggesting that business have started rehiring in the US with the insured unemployment rate falling to 14.5% from 17.1%. New Jobless Claims though did still rise, up 2.1m but continuing to slow the rate of increase. Some analysts have caveated the improvement noting some quirks around bi-weekly reporting in California and Florida with these states making up around 3m of the total 3.9m decline.

It is worth noting though Florida was one of the first states to ease containment measures and there is likely to be some signal around the decline despite some reservations around the magnitude. With temporary layoffs the major driver of unemployment in the US, it is hoped as activity picks up unemployment could fall sharply – e.g. unemployment in the US is currently 14.7%, but 11.5% percentage points is comprised who those who completed temporary jobs or were temporarily laid off. Other high frequency data in the labour market is telling a similar story with LinkedIn’s chief economist yesterday noting that hiring in China, based on its internal data, was now back to flat year-on-year, adding that “we seem to be through the worst of [the] hiring pullback” in the US.

Other data out overnight was mostly second tier, but added to views of the trough in activity having passed. The Kansas City Manufacturing Index was -19 against 21 expected, while Durable/Capital orders for April were a little better than expected though sharply negative (core capital goods -5.8% m/m against -10.0% expected). A second read on US Q1 GDP was broadly in line at -5.0% annualised against -4.8% expected.

Australian data also continues to show a pick-up in activity and RBA Governor Lowe noted the economy was tracking between the RBA’s baseline and upside scenarios (“The economy is doing a bit better than was earlier feared”). Capex data yesterday had little impact on markets, though was a tad better than expected.

News US corporate bond issuance for 2020 passed the $1 trillion market for the year overnight, the fastest pace of issuance on record. US investment-grade corporate bond spreads are around 200bps tighter than the extreme levels reached in late March and are now close to their historical averages.  Investor demand has returned to corporate bonds, with US credit funds receiving a record inflow of $13.8b last week.

Domestically Q1 construction figures will be watched closely as a pre-GDP partial (note Q1 GDP is out on June 3), though for markets the data will likely be seen as dated. Elsewhere it is relatively quiet with only Chinese Industrial Profits, ECB’s Lagarde and the Fed’s Bullard/Bostic of note. Key releases in detail: 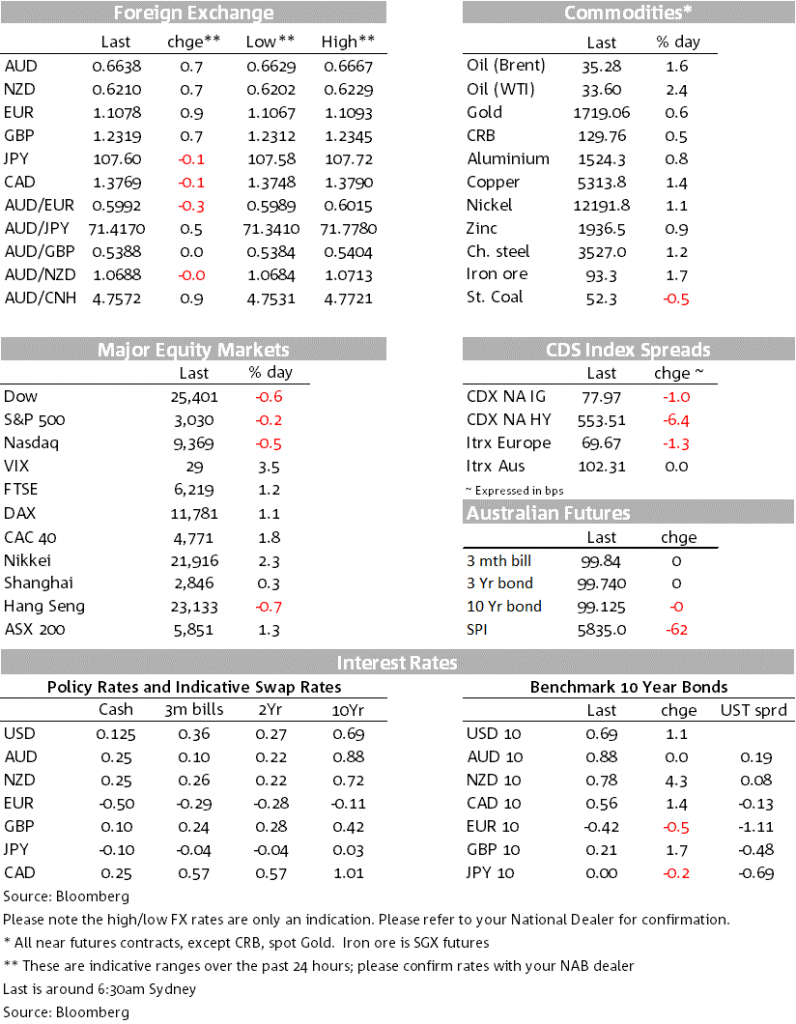